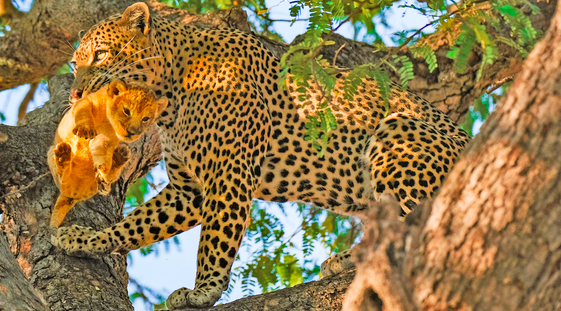 A once-in-a-lifetime sighting left a safari-goer in awe when a leopard made off with a lion cub in Tanzania’s Ruaha National Park.

In a video shared by Latest Sightings, the leopard can be seen snatching the three-week-old lion and carrying it alive up a tree.

The shocking moment was captured by Canadian lawyer Scott Hyman.

“At first I was shocked by what I saw, but quickly accepted it as part of nature,” said Hyman.

“While my heart broke for the cub, I was excited and thrilled to have witnessed such a rare event, a once-in-a-lifetime wildlife viewing.”

Another wildlife sighting that left people gaping involved two rhinos holding up traffic while they strolled on streets in Bloemfontein, Free State.

Two rhinos, named Shaka and Shakira, held up traffic on Tuesday morning after escaping from a nearby wildlife estate.

Speaking to OFM, the owner of the unnamed estate (due to poaching concerns) said he was told of the escape at 6am.

He said he and his team immediately scrambled to find the rhinos.

In the video, the giant animals can be seen casually going about their business before running away from cars.

A leopard cub managed to escape a deadly situation when a hungry hyena caught its scent and discovered its hiding place in Kruger National Park.
Lifestyle
4 weeks ago

The minute long video shows the leopard cub choking an impala on the ground before lifting it into a tree where the cub's mom was perched on a bough ...
News
1 month ago