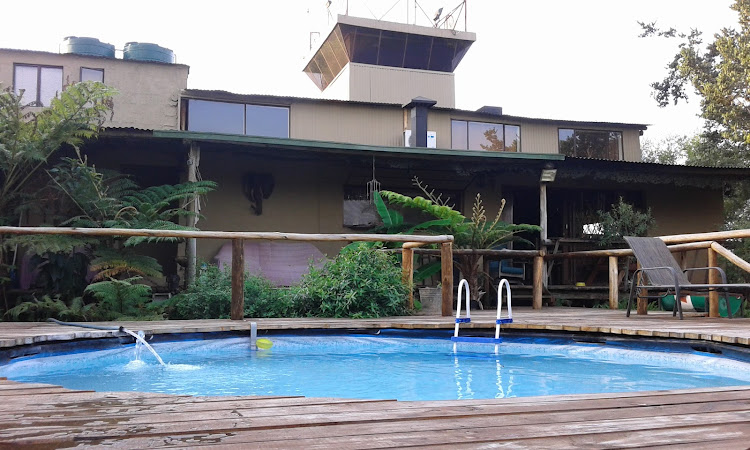 The pool deck of the main residence at Barberton Airport with the control tower above.
Image: Milne Pocock

An airport on the outskirts of Barberton, Mpumalanga could be the dream home for someone who wants a bit of space — and their own runway.

The privately owned Barberton Airport sprawls over 45ha of bushveld and comes with a 1,000m runway, two houses — each with its own “control tower” looking out over the bush — an aircraft hangar and a workshop.

Included in the R5.5m price tag are a fire-fighting vehicle, a grader and a tractor equipped with a slasher for keeping the runway grass trimmed, always useful for anyone operating a bushveld airport.

The double-storey main house has six bedrooms, a control tower, a kitchen-bar, a lounge-dining area, a pool, a large hangar, a workshop and adjoining storeroom big enough to shelter two or three light aircraft.

The second house, which is halfway down the runway, was the airport’s former terminal building before being converted into a double-storey house. 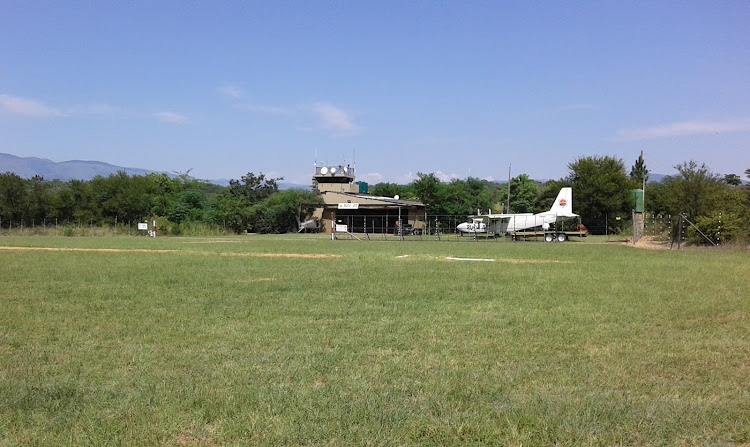 The side of the main hangar with the Britten-Norman Islander aircraft standing outside The permanently grounded plane is included in the R5.5m price tag.
Image: Milne Pocock

Also part of the deal is a twin-engine Britten-Norman Islander aircraft which landed at the airport some years ago but never left again.

“But it is complete and has not been stripped so it can be used for parts.”

Pocock, who carved the airfield out of the bush in 2002 as a base for his bush pilot flying school, Bush Air, emigrated to the US in 2016 and has decided to sell it.

“I have been living in the US for the past five years and will never return to SA [permanently],” he said, “so I need to sell the place once and for all.”

Selling the property has not been plain sailing, however. Three deals fell through at the registration phase as the buyers were not able to raise the money by the due deadline, wasting Pocock’s time and leaving him unimpressed, he said.

“I am only willing to accept an offer once I see genuine proof of money in the bank,” he told TimesLIVE.

Barberton Airport as seen from the cockpit of an arriving aircraft.
Image: Milne Pocock

The airfield is secured by an electric game fence while its water comes from a borehole which has never run dry, he said.

An advertisement for the airfield suggested the property had “numerous opportunities” such as a farm or lodge with private airstrip, game ranching, farming or even a flight school.

“A new owner is not obligated in any way to continue operating the property as an airport so the runway area can be shut and used for farming if required,” the ad said.

Crucially, the runway has landing lights which means the new owners, should they be pilots, can come and go as they please and at all hours.

From flipping his first run-down house, SA designer plays in the big league

A spur of the moment decision to buy a run-down property instead of a used car has proved to be the perfect foundation for Johannesburg designer ...
News
3 weeks ago

Whether you’re in search of wellness, a bush retreat, or fresh farm air, there’s no need for Gautengers to travel far for fun day trips or unique ...
Lifestyle
1 month ago

Tourism minister Lindiwe Sisulu is optimistic that the sector will bounce back as travel restrictions are lifted.
News
4 weeks ago