Neatly packaged and touristy Prince Albert is nice, but for a Karoo escape with a genuine lost-in-time, last-outpost feel, this little-known spot is a treat 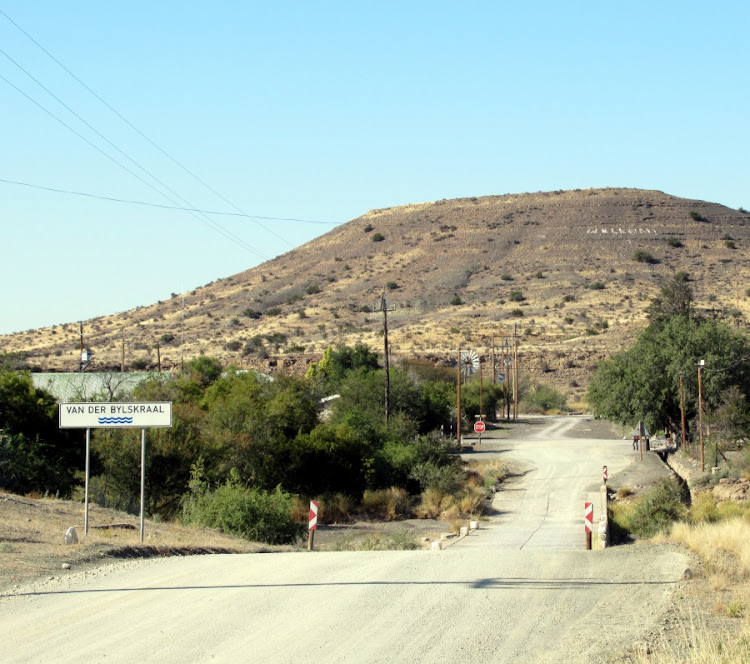 Even though Merweville and Prince Albert are the same distance off the N1 between Laingsburg and Beaufort West, and are reached by good tar roads, Prince Albert’s proximity to the larger towns of Oudtshoorn and Calitzdorp, as well as its water supply from perennial mountain streams, allowed it to grow quicker and flourish more easily.

Merweville, on the other hand, 158km southwest of Beaufort West, is literally in the middle of nowhere. Which is why I love it. It’s also one of the reasons the late Cindy Spencer, fun-loving eccentric and founder of the Bryanstan Organic Market in Johannesburg, fell in love with the town and moved here in 1996. She had seen chichi Graaff-Reinet and Prince Albert, with all their picture-perfectly restored old houses, but Merweville offered the “authentic Karoo dorpie vibe she was after”, her granddaughter Chantal Kuhlmann tells me.

Sometime after her gran died in 2020, Kuhlmann moved to the colourful, boho-chic hospitality retreat her gran had built up over almost 20 years on the western side of the Van der Bylskraal River. She now runs the three homely and artistically decorated cottages, Oasis, Kom Kyk and Cindy se Huisie, with her mother, Leila. 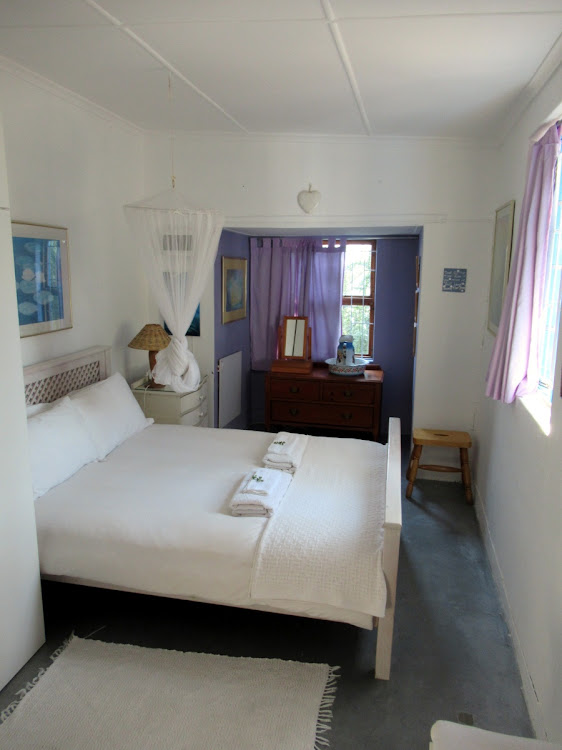 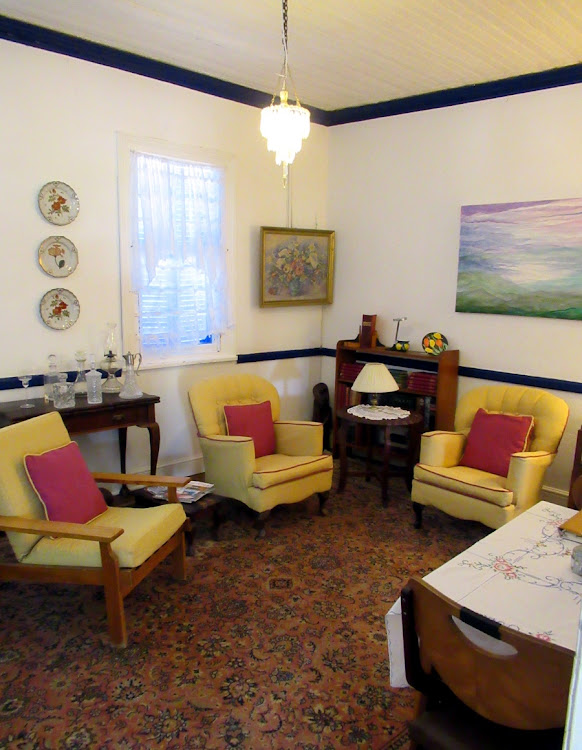 It’s in one of these cottages (Oasis) I’ve decided to lay my helmet for two nights. It was only meant to be one on a Karoo motorbike trip, but mechanical issues forced me to change plans. Enjoying a book amid the birdsong, while reclining in the shade of the magnificent old blue gum on one of the many outdoor beds, I thank the gods of mechanical misfortune.

As I lie there, listening to the light pop of eucalyptus pods hitting the old slasto paving, my one regret is that I’ve only discovered this tranquil Karoo haven now. I’ve ridden through Merweville at least a dozen times and stayed over on at least half of those occasions.

But Merweville has a range of other good accommodation offerings, too; as well as some interesting shops and a coffee-shop-cum-farmstall called Die Boekklub, reminiscent of the Afrikaans TV drama partly shot in the town between 2015 and 2020.

When I walk around the town later, Die Boekklub is already closed, so I don’t get to try the “amazing coffee and toasties” that Kuhlmann raves about, but I pop into Ronel se Hoekie to have a browse instead. Inside, I meet Ronel Jenkins and her husband JP, both ex-police officers who settled here a few years back. They sell a range of art, bric-a-brac and touristy trinkets (I can’t resist a “Minion” painted on a Karoo rock for my grandson) and they also manage an adjacent self-catering cottage, Karoo Stilte, stylishly decorated, well-appointed and reasonably priced. 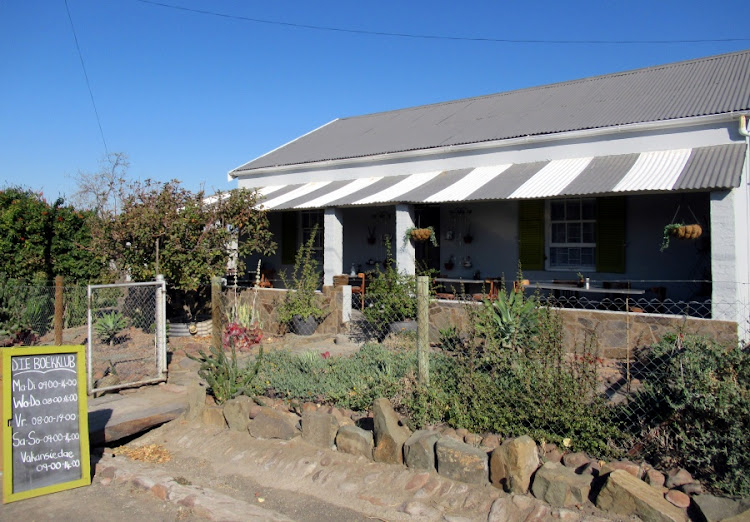 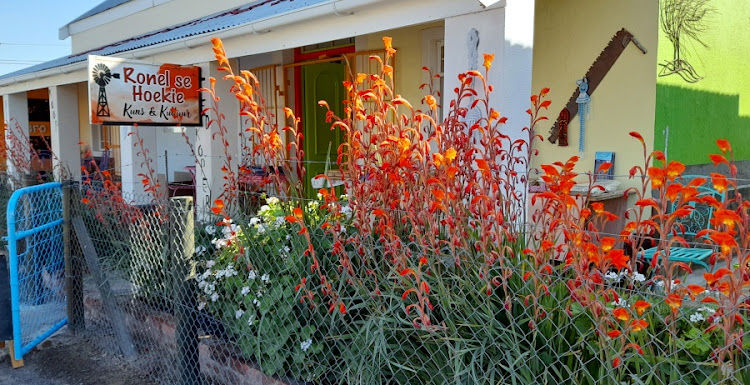 Over the road is the “Merweville Mall”, a well-stocked general dealer reminiscent of those one-stop country shops that prevailed in these sorts of dorpies 40 to 50 years ago. One such general dealer was opened by a would-be coalminer from Cape Town, Bernard Israel Nowitz, in the early 1900s when his prospecting application was turned down. In need of a wife, this pragmatic Jewish man soon joined the local Dutch Reformed Church, declared himself a “Christian Jew”, snagged a lass to marry and went on to become a respected and much-loved member of the community.

Unfortunately, the nearby “Miems” Coffee Shop is no longer operational (it was on the market when I was there), so I make my way east, over the now dry river bridge (I learn later it last ran in 2021) towards Voortrekker Street. 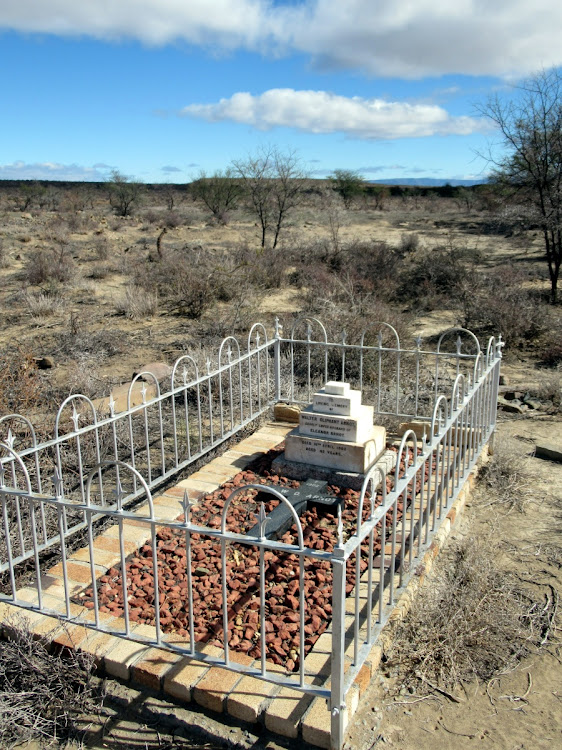 The ‘Englishman’s grave’ on the eastern approaches to the town
Image: Nick Yell

Must-dos include a visit to the church and the “Englishman’s grave”, plus a walk to the top of Letterkop, the mountain ridge overlooking the town.

As I amble around the town, taking photos of the old houses, I encounter a bearded man, who lectures me in Afrikaans.

“You must tell the people why you are taking photographs,” he says, “otherwise people will think you are recording what they have so you can come back and steal later.”

I tell him I’m a freelance journalist and remind him that SA is now a free country.

“Ja, but how do we know you are a journalist if you are not in a newspaper or magazine car?” the man persists.

Reluctantly, I force my sneer into a wry smile and assure him I don’t need to steal things off his car — he had his brake pipe cut off last week, perhaps the work of another pissed-off tourist — and ask him how long he’s been in town. Eventually, his granite-like visage turns to sandstone, and a stilted conversation is under way.

One of the useful things I glean from him is that at the end of the eight-year drought, the town was on “water-shedding” (water was only available about eight hours per day) until the big rains of December 2021 halted the process.

I meet a well-turned-out and friendly couple in the Drankwinkel. I ask if I can come behind the barricades to choose a bottle and they accede with alacrity. My budget could have stretched to something slightly more upmarket, but somehow the trusty bottle of Chateau Libertas in front of me suits the era I’ve time-travelled to. 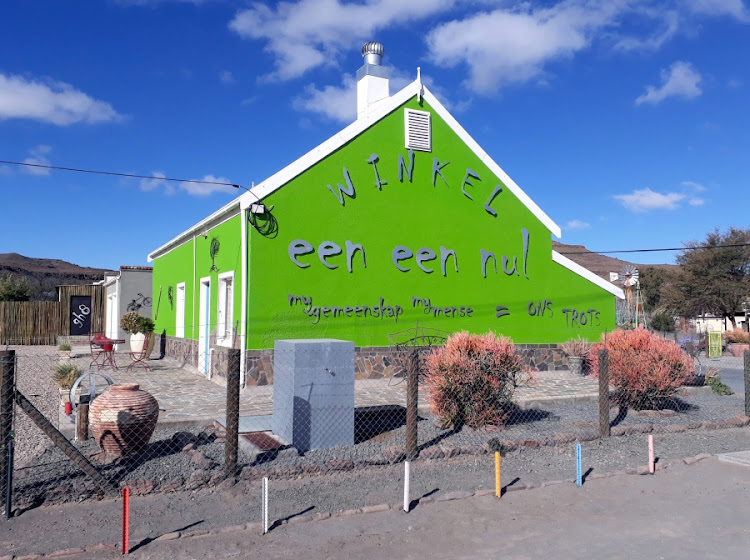 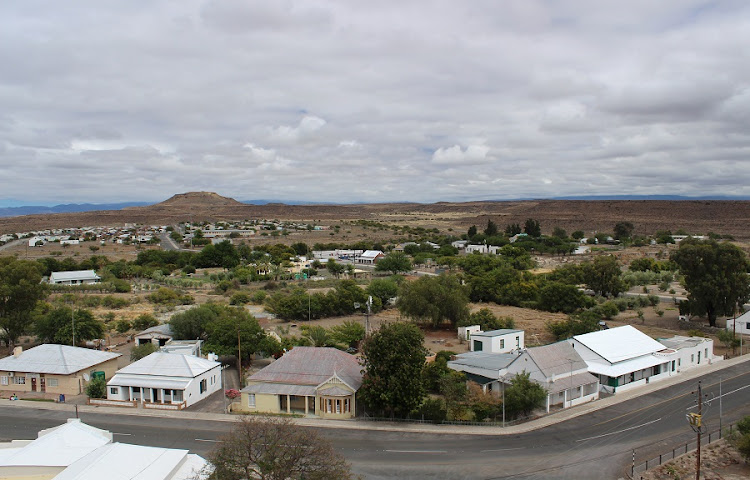 On the way back to my digs, my path intersects with another brown paper-bag carrier.

“Something sweet,” he says in Afrikaans, smiling conspiratorially as he reveals a large plastic container of honey-coloured wine. I smile back and show him my bottle of red.

We trundle down the dusty track together in companionable silence. Yet, when he veers off towards the old “Skema”, our brotherhood in Bacchus is dissolved by worlds too long apart.

7 THINGS TO DO IN AND AROUND MERWEVILLE 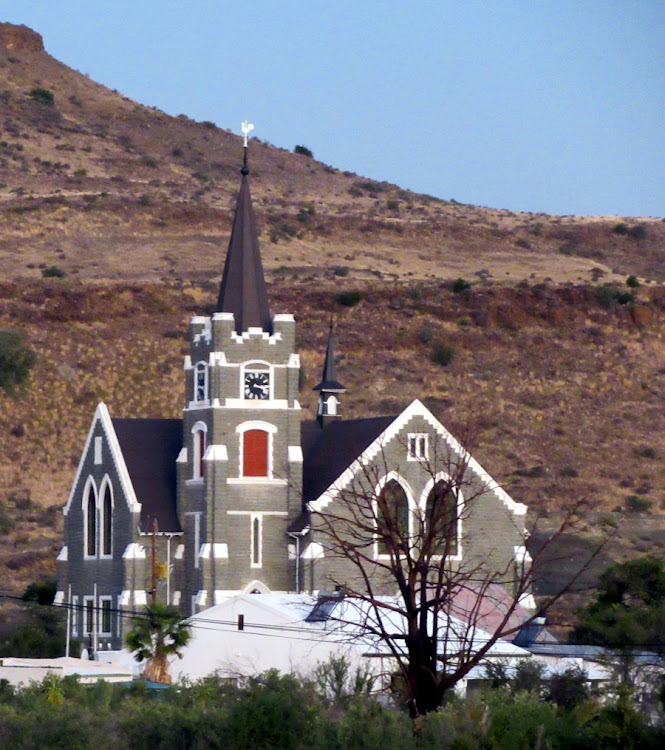 Visit the old church: Built around 1906, apparently the ceiling beams came from a shipwreck and the organ from Aberdeen, Scotland. My host told me Zena, the organist, or Dominee Herman, conduct tours.

Walk to the “Englishman’s grave”: Actually, Lieutenant Walter Olifant Arnot was Australian. Part of the foreign contingent aiding the British in the Boer War, he was returning from a scouting mission in Sutherland in April 1902 when he committed suicide outside present-day Merweville. It has been claimed that he deeply regretted the senseless killings of innocent black and so-called coloured folk caught up in the white man’s war. What is clear, though, is that the people of Van der Bylskraal, nascent Merweville, promised to always tend his grave.

Climb or drive up Letterkop: The mountainous ridge overlooking the town affords epic views of the surrounding Koup Karoo (from the Khoi word “ghoup”, which means “caul fat”, the stringy fat found around organs. It's a reference to the similarity of its appearance to the red-brown soil and yellow grass of the region). Start your climb from behind the church or take a 20-minute 4x4 drive.

Drive to Sutherland via the Rooiberg Pass: This 110km dirt track journey (about two hours) requires an AWD SUV, but it will reward with panoramic views and pristine Bo-Karoo vlaktes. Once in Sutherland, a visit to the planetarium is a must (078-603-0058). Return via a combination of the Komsberg Pass and Moordenaarskaroo dirt tracks to Laingsburg (about two hours) and then the Koup Karoo dirt road (79km) is reached 39km north of Laingsburg on the N1 (another two hours).

Visit Prince Albert: Upmarket and pretty Prince Albert has great restaurants, shops and a theatre, plus olive and wine-tastings on its outskirts.

Visit Fraserburg: Here you will find the Ou Pastorie Museum and Gansfontein palaeosurface. Even if you only have a passing interest in palaeontology, these will delight — call Marinda (072-386-0102). There are two routes from Merweville: one for sedan cars over the tarred Tierkloof Pass; and the Oukloof Pass for the AWD SUV brigade.

Stroll around town: There's a good coffee shop and farm stall; an art and bric-a-brac shop; plus a fine local butcher where you can stock up on Karoo lamb.

GETAWAY AT A GLANCE 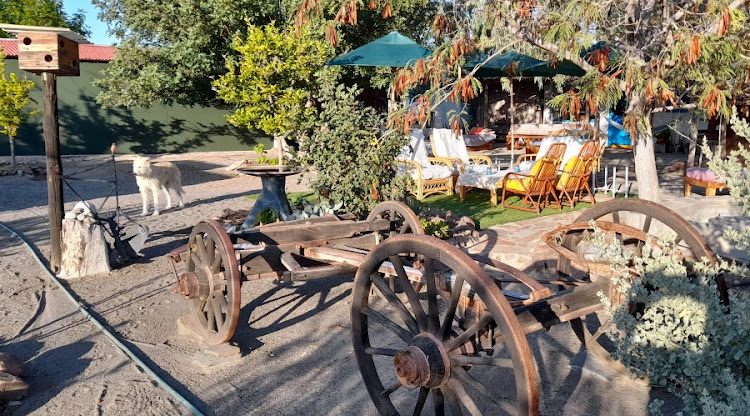 WHERE IT IS: Merweville is in the Western Cape’s Koup Karoo, 43km northwest of the Prince Albert Road on the N1 (85km from Laingsburg and 115km from Beaufort West).

Off-tar and off-the-wall: A road trip in the Klein Karoo

Dirt roads, cars old and new, an alien crash site and a puzzled GPS are all part of the fun of going off-road in a place brimming with creative ...
Lifestyle
7 months ago

This farm retreat has the whinny formula: a herd of majestic horses

Outeniqua Moon, near Mossel Bay, offers blissful mountain surrounds and the calming company of Percherons, including the biggest horse ever bred in SA
Lifestyle
11 months ago

When life gave them lockdown - and the ability to work from anywhere - Melissa Sutherland and her husband seized the chance to realise their dream of ...
Lifestyle
1 year ago