Oman: it’s an unusual pick for South Africans but it's pure holiday gold

Want a beach holiday with a difference? With its balmy weather, brilliant food and phenomenal scenery, this 'secret' resort near Muscat is out of this world 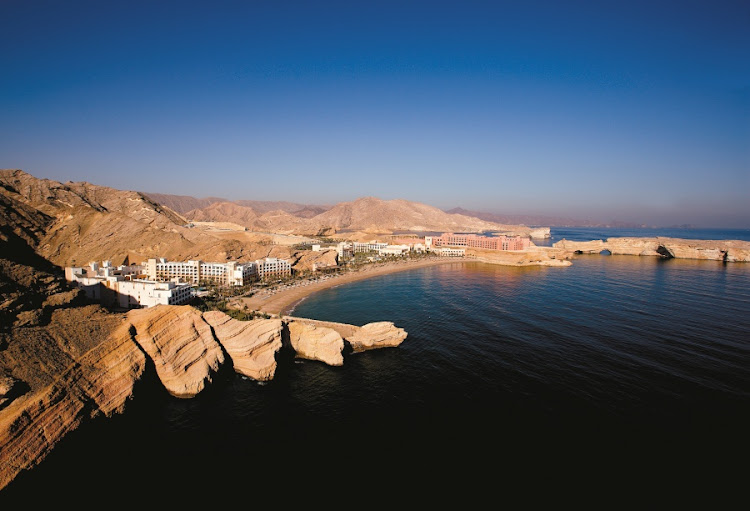 The Barr Al Jissah resort comprises three hotels on the shores of the Gulf of Oman.
Image: Shangri-La Hotels and Resorts

When I told my friends I was going to Oman they said: “Wear the fox hat?” — or something to that phonetic effect.  It’s not unknown of course, but it’s not exactly on our radar either, which is a shame, because, wow, what a place.

Sometimes you just know from the outset that you’ve arrived somewhere extraordinary and that you’re destined for a special trip. This was definitely, arrestingly, one of those occasions.

The road from the airport to Barr al Jissah, my lodgings for what were to be seven glorious days, takes you through the capital, Muscat, before presenting you with a point-blank display of the country’s awe-inspiring geography — a rocky, mountainous desertscape that’ll remind fans of Tatooine, Luke Skywalker’s home planet in Star Wars.  I wanted a beach holiday with a difference; what I got was, in more ways than one, out-of-this-world. 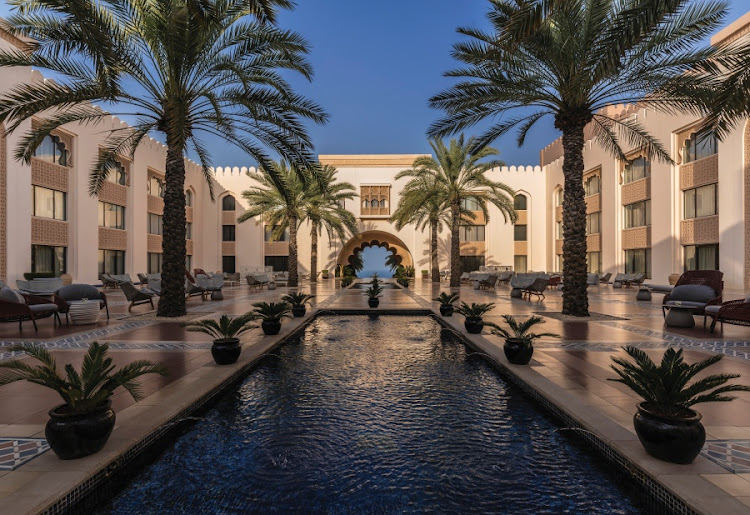 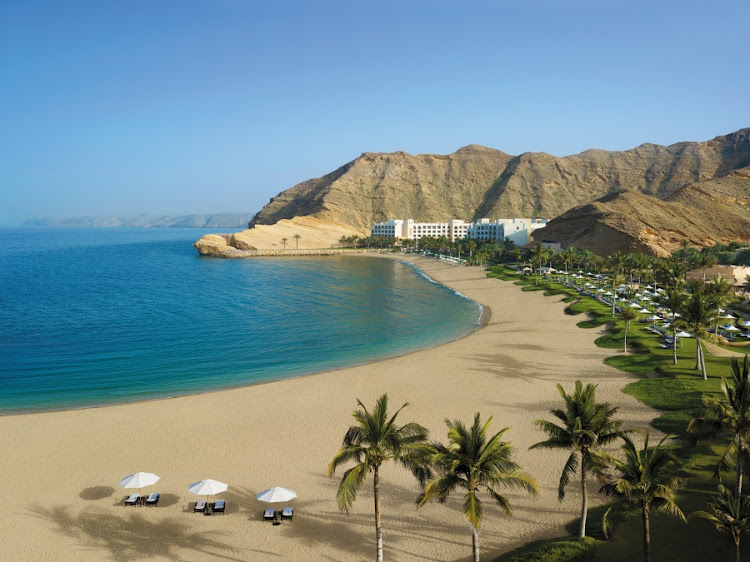 Barr Al Jissah is a freak of nature, even in its already freakishly beautiful context — an ochre peninsula that appears to have been hewn from great slabs of rock by a troupe of talented giants (in the absence of a more scientific explanation).  The land is owned in its entirety by prominent Omani Mohammed Al Zubair, having been gifted to him by the previous sultan with the provision that it be employed to benefit the country’s development. Sweet gig. Sadly, my questions about where I could sign up for this programme went unanswered.

Anyhow, as a result of that provision, the area has since 2006 accommodated the three hotels, operated by Shangri-La, that constitute the 50-hectare resort. They are the 180-room Al Husn (“the Castle”), 198-room Al Bandar (“the Town”), and the 302-room Al Waha.

With their dramatic natural setting, their design inspired by the country’s traditional “fort architecture” and their frankincense-scented interiors, an oil central to the country’s heritage, they offered me a vividly sensory introduction to Oman.

There’s a particular cadence that I tend to adopt when holidaying at a resort. Relax, exercise, drink moderately, eat immoderately (hence the exercise), sleep lots and repeat, with a few variations interspersed to avoid monotony. 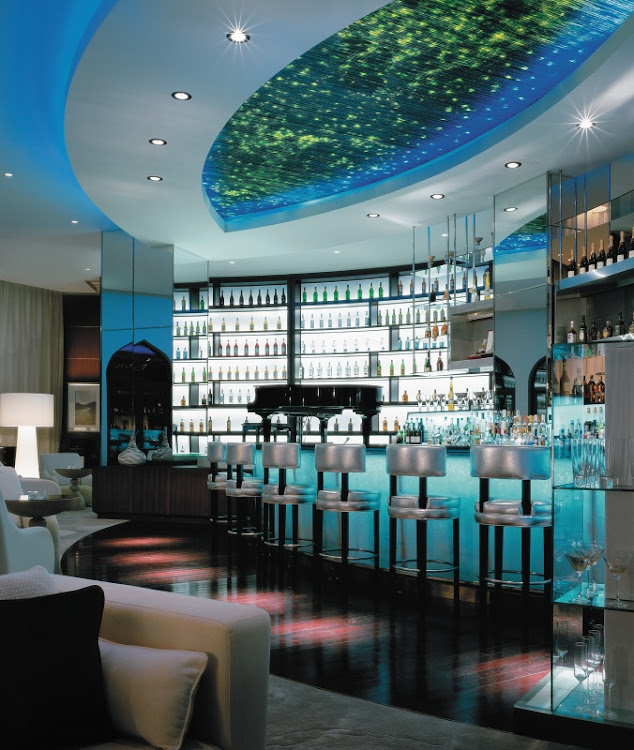 The piano lounge at the Al Bandar Hotel.
Image: Shangri-La Hotels and Resorts 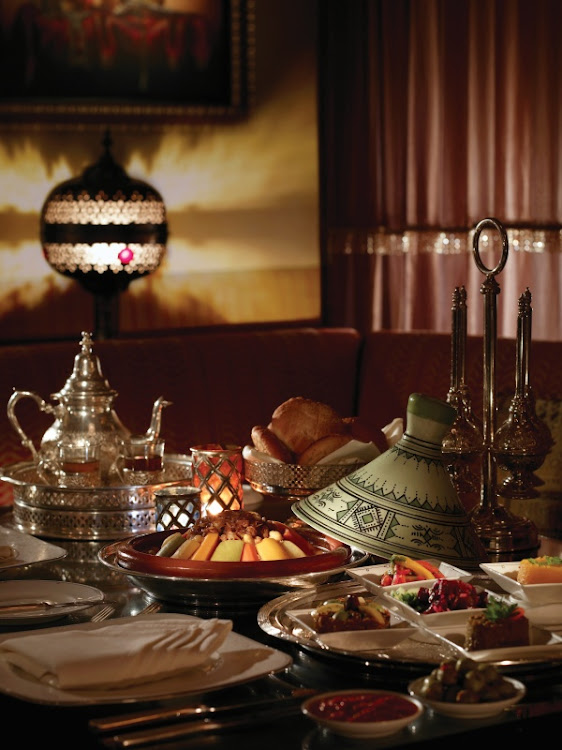 In pursuit of this regimen I soon discovered the Piano Bar, with its generous schedule of happy hours and its barman of deft skills and familiar accent.  Oman, he told me, may not be an established destination for South African tourists but it is popular with South African professionals looking for work in the hospitality industry — offering an attractive combination of great weather, a beautiful environment and ample opportunities (that is much of what drew me here).

As if to prove the point, a second South African, the piano bar’s resident piano man, promptly appeared, tickling the ivories while I sat back and sipped a few martinis.  Later in the trip, as I was diligently pursuing my vacation formula, I encountered yet another, this time a gym instructor.  A little bit of home when away from home is never a bad thing.

I was at Barr al Jissah in November, with the “winter” temperatures ranging from 21°C at night to a peak of 30°C or thereabouts during the day, so absolutely perfect and highly recommended.  The myriad pools and canals and the long stretch of sea were refreshing, the al fresco dining pleasurable and the sun warm and unwavering but gentle enough. It was a balmy bliss. 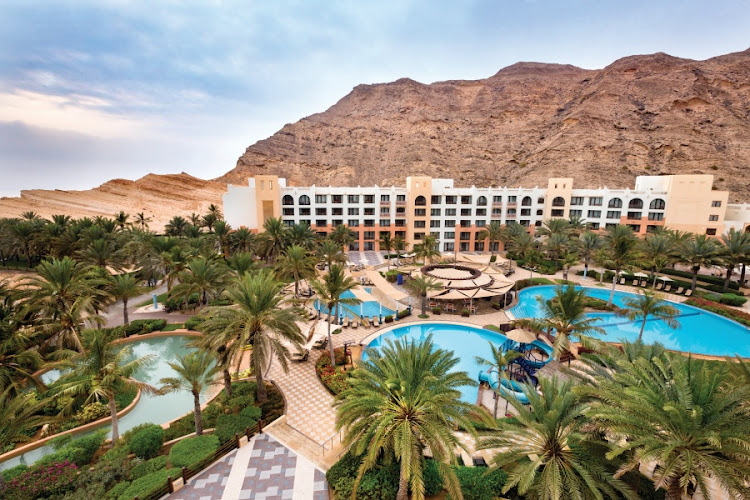 A view of the pool at the Al Waha Hotel.
Image: Shangri-La Hotels and Resorts

At the height of summer the mercury regularly climbs into the 40°Cs, which may get a tad uncomfortable.  That season’s drawcard though — the roundabouts to these temperature swings, so to speak — is the turtles, the peninsula being home to one of only five nesting sites in the country.  Visiting during the April-to-August hatching season affords you the opportunity to see, and even swim with, turtles close-up, a rare privilege.  So a tough choice I guess, but an upside in each case.

In a resort of this calibre the highlights are many: massages in a private villa at the spa administered by expert Filipino therapists, to me always a barometer of quality, and the civilised pre-dinner drinks in the courtyard at Al Husn, the resort’s flagship hotel, being just two of what I got to enjoy.

There are some experiences though that are so magnificently and comprehensively enjoyable, so lacking in any kind of want that describing them as mere highlights seems inadequate. Climaxes might be more vigorously apt. Such was the resort’s signature night at Sultanah restaurant — the climax of my stay. Perched in the open air on a craggy ridge, cooled by the season’s evening breeze, with show-stopping views of the sea and surrounds, it was as idyllic a setting for a meal as I could have imagined. 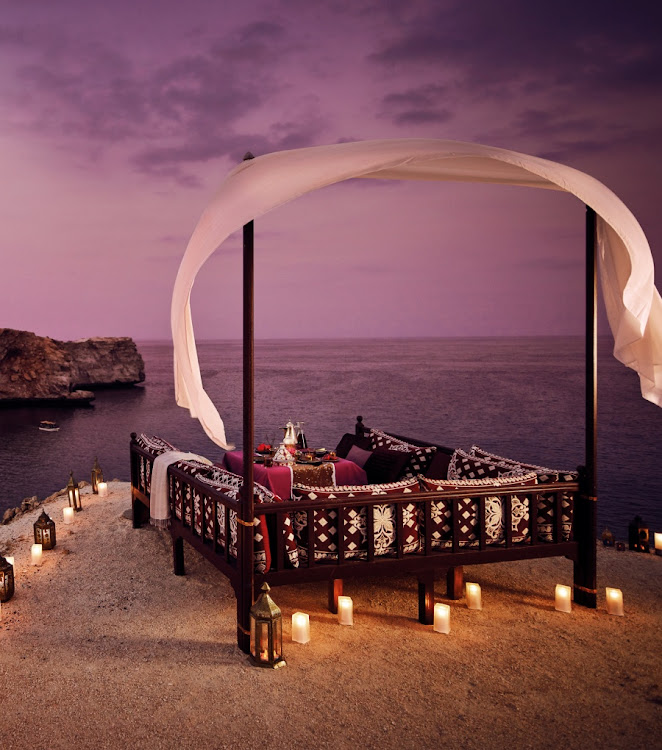 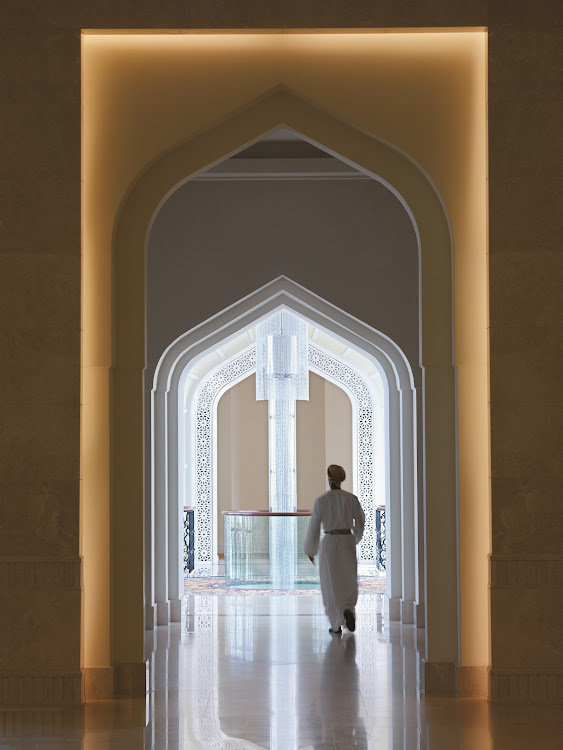 A view of the lobby at the Al Bandar Hotel.
Image: Shangri-La Hotels and Resorts

I sat at our table with my wife, realising as I took in the sounds of the accompanying jazz duo and the flavours of the free-flow Champagne, and as a surge of intense wellbeing threatened to overwhelm me, that I should drink as deeply of the moment as I possibly could. I gave it my best shot, lingering over oysters, sashimi, lobster tagliatelle, grilled lobster and tenderloin, our selections from a lavish barbeque buffet that had to be seen to be believed, before eventually, reluctantly, departing the scene with both my appetite and spirits sated. That night I slept the king-size sleep of the utterly contented.

We cushioned our departure with a few days exploring the desert, overnighting on platforms among the dunes. We visited the spectacular Wadi Shab, a narrow canyon with crystal-clear blue pools and a secret waterfall inside a cave, for a kloofing adventure, and Muscat proper, to which the resort gave us an easy springboard, and which further elevated the country in my esteem.

Oman, and indeed Barr al Jissah, may seem obscure to most South Africans, but sometimes you discover the greatest prizes in the most unthought-of places.  This is one of those finds. 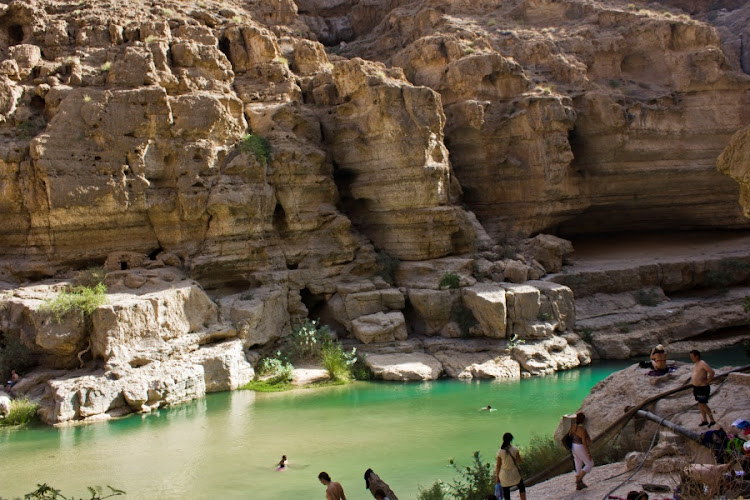 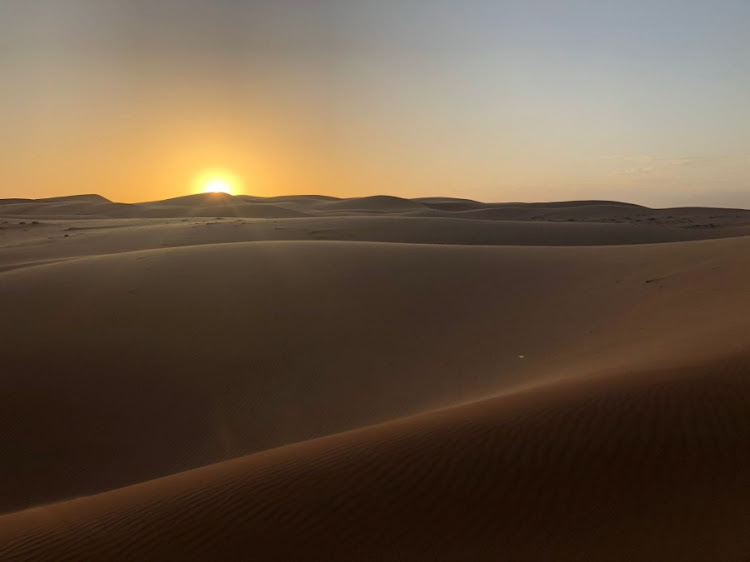 The resort: Secluded in a hidden cove, Barr Al Jissah is a 40-minute drive from Muscat's airport and 30 minutes from the city centre. Rates in November (off peak) are from US$316 per room (for two guests) per night. See shangri-la.com.

Currency: The Omani Rial (OMR) is the national currency — nominally one of the most valuable in the world.  It trades at roughly R40 to the OMR.

Visas: These can be procured online at evisa.rop.gov.om.  Note that visas for visits exceeding 10 days are exponentially more expensive.

Getting there: Emirates operates regular flights to Dubai, from which multiple daily connections to Muscat are available.

Clothing: Women should endeavour to dress with shoulders and knees covered in public spaces.

Getting around: Hiring a car and making use of the excellent road network is a cost-effective, hassle-free option in a country where petrol is almost as cheap as water.

Maldives: An island for everyone

Touring six island resorts in eight days, Chrizelda Kekana discovers that, no matter your particular wants and desires, there's a perfect one for you
Lifestyle
1 month ago

Relaxed at last: a post-lockdown cruise from SA to sunny Mozambique

After two years of delays due to strict lockdown rules, Sanet Oberholzer finally got to board the MSC Orchestra in Durban for a family trip to Pomene.
Lifestyle
2 months ago

Do you want five-star pampering at luxury resorts or getting out and exploring local life and customs? In Mauritius, you can have it all.
Lifestyle
2 months ago