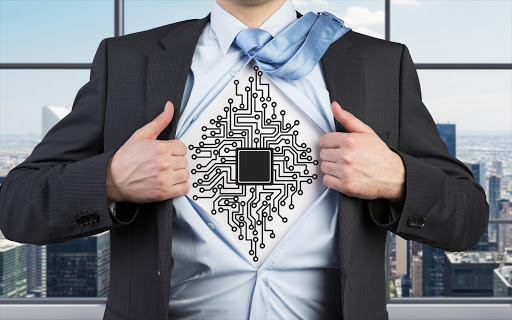 Tiny chips implanted under the skin can be used to call your friend or start your motorbike with a single touch — and first adopters are raving about the technology's potential to transform humanity.

Anders Hoeg Nissen sits in a black medical chair in the backroom of a Copenhagen piercing studio. He puts his left hand on the gauze that covers the armrest and, pushing his head backward, he hits the lamp that lights the operating area. "Ouch! That probably hurt more than what they'll do to me," he says.

Jowan Österlund, a beefy man with his left arm covered in tattoos, raises a 10-centimeter-long syringe between his pink rubber gloves. Its needle is at least three times as thick as those used to take blood samples. Österlund pinches the flesh on the top of Nissen's hand.

"Take a deep breath," he tells Nissen, before quickly burying the needle between his thumb and his forefinger.

Whether this means "improved" is debatable. But what's certain is that Nissen is now implanted with a radio-frequency identification (RFID) chip the size of two grains of rice. It's not unlike those used in cats and dogs to ensure their owners can be reached should they get lost.

Is this the first step toward the man-machine, the fantasy of transhuman technology fanatics? "I've always dreamed of becoming a cyborg," jokes Nissen, a radio broadcaster who hosts a technology show. "I have a real personal and professional interest in exploring man-machine interfaces," he says more seriously.

About 10 people curious about the process, all of them young men, are attending tonight's "implant party." But only two of them are actually taking the plunge, coughing up about 200 euros, after-sales advice included.

The second daredevil is none other than the studio's owner, Muffe Vulnuz. His own look is extreme indeed, with large parts of his body covered with piercings and tattoos, as well as horns on his head and other silicon shapes under his skin. For his birthday, he decided to gift himself two chips.

"Human chipping" is moving out of the marginal spheres of biohacking pioneers and into that of body-implant lovers, and it's seducing a geeky youth free of all taboos. But just what is the point of such technology?

For now, the chip's use is similar to that of the plastic loyalty cards that we use to get discounts at the supermarket. When placed in front of a communication reader, the device emits in short waves (13.56 MHz) the unique identification number of its owner.

The reading device can be programmed to execute different tasks — for example, to unlock a door or to start an electronic device like a printer, a computer or a smartphone. "I have two chips," Österlund explains. "The one in my arm calls my wife when I move my cellphone closer to it. And the one on my hand activates the light."

Other "chipped" people also use it to send their virtual business card to compatible smartphones. Apps such as NFC Tools Pro on Android can read and edit these electronic labels, which have a capacity of 880 bytes. Bikers can use them so that their motorbikes start when they touch them.

"We're clearly pioneers," says a conventionally clad Hannes Sjöblad, the event's organizer. He's the co-founder of Swedish biohacking group BioNyfiken. Biohackers are ordinary citizens who explore biology with hacker ethics, meaning sharing and openness. "For now, there are only a handful of possible uses," Hannes says. "But the more people adopt chips, the more companies and public institutions will be encouraged to develop new features."

He says the number of disciples is constantly growing. "Here alone, we have already implanted about 300 people since September," he says. But his main supplier, the U.S. website DangerousThings.com, has a more global overview of the phenomenon. "I sold about 4,000 of these chips over the past year, most of them in the U.S., the Netherlands, Sweden, Finland and Belgium," says the website's creator Amal Graafstra. "And even a few in France."

Graafstra fears this technology could be developed in a closed way by companies such as Honeywell, and so he opted for the open ISO standard instead. "I created this online shop because I had been using these technologies myself since 2005," he explains during a Skype interview. "I realized when I was talking to suppliers that people were implanting themselves with chips created for livestock or industries, which sometimes contain toxic substances and metals!"

Overwhelmed with people asking for advice, the Seattle native says he then developed "safe material and procedures," which he now sells. "Unlike RFID chips for livestock, mine are made so that human flesh doesn't stick to it, which means they can easily be removed."

Sjöblad is also convinced that beyond these first applications, the "connected body" has a great future ahead. "We carry with us loads of personal objects — bank cards, driving licenses, library cards, house keys, office keys, car keys, which have no other goal than to identify us. Eventually, we'll be able to get rid of all that and to replace them all with one unique digital identification."

He believes that in the near future, these intelligent implants will enable us to pay for coffee or dinner, to take the bus or the subway, to keep our cholesterol level in check, and so on. In his view, the two most promising areas are health and data encryption. Eventually, he sees these chips replacing smart watches and bracelets. He goes further and also imagines that the technology will eventually be the door opener to our entire digital life, replacing the dozens of codes and passwords we all struggle to remember.

Hannes gets carried away. "These implants will be like our internal organs, our kidneys, our livers, and they'll fulfill their purpose without us even thinking about it," he says. Does he dream of living in a world where people become numbers, traceable entities whose every actions can be recorded? "On the contrary," he insists. "It's up to the individual to choose what he wants to share and with whom. This chip, which only wakes up when it's activated by a reader, can't be used to locate us!" At least not yet.

Hannes admits that this type of technology, which could be exploited by evil-minded multinational corporations or states, raises serious privacy issues. "But our role is precisely to experiment and explain to the public that these new tools exist so that citizens can better control them," he says.

It remains to be seen whether these implants are just a fad for tech prophets or whether they're here to stay. But given the resistance of French shepherds against the compulsory "chipping" of their flocks, France could very well be like one of Asterix's villages resisting Roman domination.