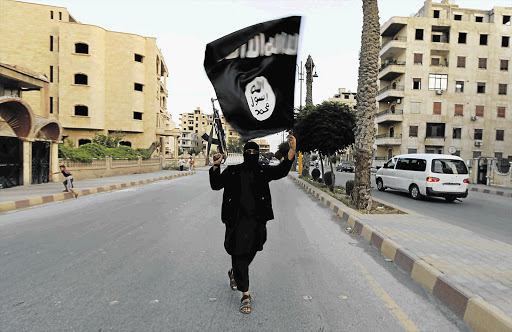 A militant of the Islamic State waves the group's flag in Raqqa, Syria. The group has targeted Egypt.
Image: Reuters

The brother of a Port Elizabeth man who has joined the terrorist organisation Islamic State has spoken out against his sibling’s decision and says it has put him and his family in grave danger.

Allie Moosagie, of Cape Town, confirmed that his brother, Rashid Moosagie, left South Africa to join IS — also known as Isis, or the Islamic State of Iraq and Syria — in January, taking his wife and children with him.

He believes Rashid’s children, all under 30, are being “brainwashed ” by IS.

This comes after a Cape Town teenager’s plan to join IS was foiled two weeks ago.

The United Ulama Council of South Africa has “condemned” IS and accused it of being a “misguided political enigma which has distorted the teachings of Islam”.

Allie has endorsed the council’s stance.

“IS is a disgrace to Islam,” said Allie, who has a doctorate in Islamic law from the University of Cape Town.

“I will never, ever even remotely encourage any particular person to go to that place.”

Allegations have surfaced that Rashid’s followers, possibly one of his sons, tried to recruit the teenager.

Soon after the Grade 11 girl was removed from a British Airways aircraft at Cape Town International Airport on April 5, an electronic circular detailing Rashid’s alleged involvement in recruiting for IS emerged.

It stated: “Devout students of Mufti Rashid based in Port Elizabeth are actively recruiting young naïve and impressionable youngsters to join their group and migrate to Syria. ”

The girl’s family are not speaking to the media.

It is believed that they have seen the circular.

Allie has not spoken to his brother, but family members in South Africa have “cautiously” contacted his nieces and nephews in Syria.

Since the teenager’s story emerged, Allie said, communications with his relatives in Syria had become “even less, and even more secretive”.

But he has established that his brother’s children are attending religious classes every morning, which he believes is a form of “brainwashing”.

“[The children] are so connected to my brother in the sense that they didn’t do any formal schooling.

“They were home-schooled from day one. They are fairly brilliant and they excelled. The ultimate and the only authority is their father, ” said Allie.

Two of his brother’s daughters are still in South Africa, one in Durban, another in Port Elizabeth. An “estranged” daughter from a previous marriage is living in Cape Town.

Rashid needed an “exit strategy ” should he decide to return home.

“When he comes back to South Africa, he probably has to face the law and go to court.

“It is better than sitting in a particular place waiting to be bombed,” said Allie.

“At this point he is thinking with emotion, but reality is going to dawn on him eventually.

“Rashid is calm and placid. He might be holding very radically opposing views to my views, but he is very docile, doesn’t move around, stays in his house, doesn’t visit, doesn’t journey,” said Allie.

The brothers studied at the same Islamic institution in India.

Rashid had not left South Africa since the ’80s, not even to go on pilgrimage to Mecca.

According to an article published by the Institute for Security Studies, the Protection of Constitutional Democracy against Terrorist and Related Activities Act of 2004 prohibits South Africans from “committing terrorist acts domestically and in foreign countries”.

The Regulation of Foreign Military Assistance Act of 1998 “precludes any South African citizen from participating in armed conflict, nationally or internationally, except as provided for in the constitution or national legislation”.

The Iraqi ambassador to South Africa, Hisham al-Alawi, has shared information on IS activities with South African authorities.

This includes details of two young men from Gauteng who were killed fighting in Syria.

Brian Dube, spokesman for the State Security Agency, said: “The issue of South Africans being recruited via online platforms by IS is [an ongoing] concern, one that needs the collective effort of the government and civil society.”

The UN Security Council has warned of 11 international terrorists who might consider South Africa a safe haven.