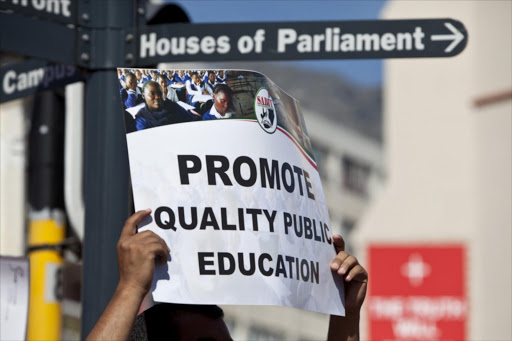 The government paid a staggering R392-billion in salaries to about 1.4million public servants in the past financial year.

The lion's share, R148-billion, was spent on teachers and other staff at state schools, while R88.7-billion went to doctors, nurses and other health workers at public health facilities.

A Treasury document reflecting the salaries paid by 43 national departments and South Africa's provincial departments showed that the next highest wage bills were for:

The Department of Traditional Affairs spent just R50.2-million on salaries, the least among all national departments.

The state's salary bill is projected to balloon to R437-billion this year amid demands by public sector unions for a 10% salary adjustment.

According to another Treasury document, the state will be in the red to the tune of R157.4-billion if it accedes to all of the unions' wage demands.

The Free State education department's salary bill, for instance, is expected to jump from 83% to 90% next year.

Some provincial education departments have been accused of "shifting funds" to pay salaries, thereby "compromising service delivery to schools and the quality of education".

An entry-level teacher with a four-year university qualification earns R16 500 a month.

But not all civil servants fare this well.

Nyameka Khumalo, 60, an auxiliary nurse at a Gauteng hospital, takes home only R9 900 a month - after working for more than 40 years.

She said she had to cancel a life insurance policy last year because she could no longer afford to pay the R850 monthly premium.

"No bank is prepared to give my daughter a bursary or student loan. Life is so difficult. We work long hours and should be paid more," she said.

Dawie Roodt, chief economist at the Efficient Group, was adamant that the country's public servants were "overpaid and under-worked".

"Compared to what the rest of the economy earns and what they produce, I think they are getting too much."

Said Roodt: "If you look at how much taxpayers spend on education, bearing in mind that just about all the money goes on salaries, you will find that despite the fact we spend more, our education outcomes are not only bad, they are sometimes the worst in the world."

Servaas van der Berg, a professor of economics at Stellenbosch University, said: "I do think we have a public sector that is somewhat bloated but at the same time not badly paid given that they have more job security than what you have in the private sector."

Basil Manuel, president of the National Professional Teachers' Organisation of South Africa, said the average teacher was not earning a decent salary: "Your average teacher is unable to buy a house or access quality schooling for his children."

Willie Schoeman, principal of Hoërskool Pietersburg, who has 18 years' experience as a headmaster, said those with his management experience in the private sector were earning R70 000 to R80 000 a month.

Brent Simons, a spokesman for the Department of Public Service and Administration, said the government budgeted for these salaries to ensure high levels of service delivery.

Public sector unions are also demanding a housing allowance of R1500. The employer's original offer was a 5.8% cost-of-living adjustment and increasing the medical aid subsidy from 17.6% to 28.5% and the housing allowance from R900 to R1200.

Co-operative governance, home affairs and rural development and land reform had two each. The police had the equivalent of 26 deputy directors-general, the most of all national departments. There were 19 deputy directors-general in the National Treasury, 16 in international relations, 14 in health, 14 in trade and industry, and 13 in performance monitoring and evaluation.

Most public servants earn more than R15000 a month, placing them in the country's top 20% of earners.