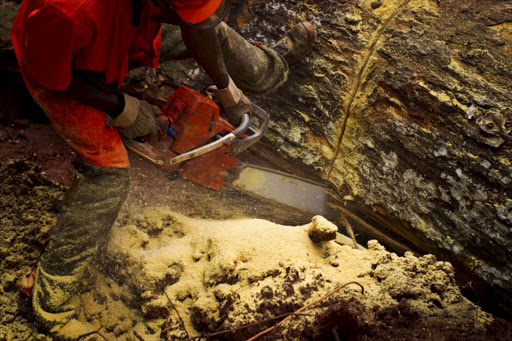 FSC sustainable logging being carried out in the natural forest around the Alpicam logging concession in the Kika region of Cameroon, June 3, 2010.
Image: Brent Stirton/Getty Images

European and US companies are participating in the multimillion-dollar trade of illegally logged timber from the Democratic Republic of Congo, breaking not just Congolese but also European Union and U.S. laws, an advocacy group report said Wednesday.

The report by Global Witness adds timber to diamonds, gold and other natural resources that are abundant in Congo and, according to international human-rights organizations — including Global Witness, Human Rights Watch, and Amnesty International, among others — are often illegally extracted and exported from the large central African nation.

The advocacy group said its researchers visited 28 of the 57 industrial-scale timber operations in the country over the last four years and found that all 28 were breaking several laws, including underpayment or nonpayment of taxes, lack of necessary licenses, logging outside the licensed area, logging protected timber species and not adhering to agreements to protect the local population from the impact of their operations.

“This shows that all industrially logged timber being harvested in DRC and traded internationally should currently be regarded as at a very high risk of being illegal,” the report said.

The trade, valued at about $95 million a year at the moment, is derived from logging about 10% of Congo’s forests. The country is home to two-thirds of the world’s second-largest rain forest after the Amazon.

The top importer of Congolese timber is China, controlling about 65%, the report found. The EU is second, with about 22% of the trade. France is the biggest EU importer.

According to the Global Witness report and the United Nations, the woods harvested include Afrormosia, a valuable species of hard timber protected under the Convention on International Trade in Endangered Species. Big-leaf mahogany and cedro are also rare species logged in Congo.

Among the violations alleged to have been committed, Global Witness researchers said its researchers found timber firms operating in Congo to be evading taxes, breaking environmental rules and not keeping commitments to local communities, which are part of the legal duties timber firms have in Congo.

The Ministry of Sustainable Development, Forest Economy and Environment, which is in charge of forests, didn’t respond to calls seeking comment.

Sodefor, one of Congo’s two biggest timber firms, which between them control about half the country’s timber industry, dismissed the accusations. The second firm didn’t respond to calls seeking comment.

Filomena Amaral, a spokeswoman for Sodefor in Kinshasa, said the company is “aware that any process can be improved and that being more than 2,000 employees in our company, it is inevitable for us to make mistakes.” But she rejected claims that Sodefor’s activities were leaving its trade partners vulnerable.

“We are complying with national laws and international norms and regulations around our activities and we are fulfilling our legal, fiscal, social and environmental responsibilities. We can’t see why importing timber from our company would represent any risk of breaking the law for any firm anywhere in the world,” Ms. Amaral said.