Honeybees could be key to stopping destructive elephants 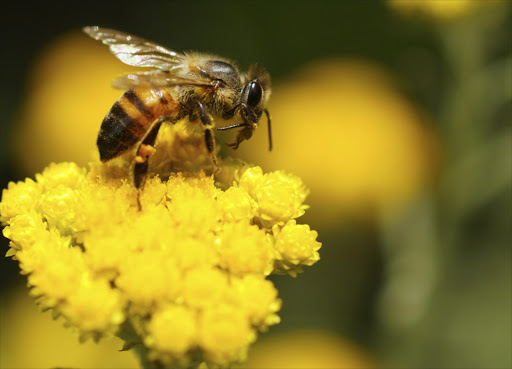 They may be small and even considered a painful annoyance, but the simple honeybee could stand in the way of marauding elephants at the Kruger National Park.

The 17 000 elephant population in the 19500km² national park is already causing widespread damage as it covers vast distances in search of food and water.

The elephants are known to strip trees of their bark, effectively killing the tree, and to flatten anything that stands in their way. They also devour tons of leaves and supple branches as they cover dozens of kilometres a day.

South African National Parks officials have, since 2012, tried to come up with ways to prevent the damage — particularly to the iconic marula tree that is often favoured by the elephants. Some trees have had wire nets installed around the stems to reduce the risk  of their bark being stripped.

But the lasting solution could come in the form of the honeybee.

“This is a new dimension towards conservation,” said Robin Cook, a Master’s student at the University of the Witwatersrand. Cook is doing his research on the use of bees to keep elephants out of certain areas.

It might sound strange, but it has worked in the past.

In 2010, another researcher, Lucy King, started a project in Kenya aimed at keeping elephants away from farmland. In Kenya, like in many other African countries, nature reserves are not fenced, meaning that elephant-human interactions are higher than in South Africa.

King’s research found that trees which had beehives are generally avoided by elephants. Projects like hers are now running in Botswana, Mozambique, Tanzania, Uganda and Sri Lanka.

“The second thing is that, although elephants are generally thick-skinned, their eyes and their eyes are thin; the skin is sensitive there. It can be painful if [the bees] sting them around the facial area,” said Cook.

The elephants’ fear of bees runs much deeper.

“If the researchers played recordings of swarming bees, the elephant would run away from the sound itself. They would lift their heads, swish their heads about, as if you could imagine the bees were around them. They also let off a very unique rumble. The researchers then recorded this rumble and played it to other elephant that weren’t exposed to the actual bee sound —  and they showed the exact  behaviour,” he said.

Armed with this knowledge, Cook had begun work on constructing the “bee boxes” that will be installed at the Jejane Private Nature Reserve, which falls within the Kruger boundary. It is hoped that the bees will  prevent the elephants from causing mass destruction to many tree species, particularly the marula.

Michelle Henley —  of Save the Elephants and Elephants Alive, two organisations working with Cook on the project —  said SANParks approached in 2012 looking for a way to keep elephants out of certain areas that were at risk of being damaged. After looking at using wire-net protection around the stem of the tree, it was decided earlier  in 2015 to test the bees.

But this  is not just about the elephants.

The project, according to Henley, had several knock-on benefits.

“Bees have the added benefit of providing honey and functioning as important pollinators. By-products of a study like Robin’s could contribute towards increasing food security,” she said.

There was also a skills transfer, with local communities being used to assist in making the hives and trained in beekeeping skills.

“Studies such as these not only contribute towards science but also broaden local community skills and could become valuable case studies for promoting job creation,  while promoting ecological services and system functioning,” said Henley.