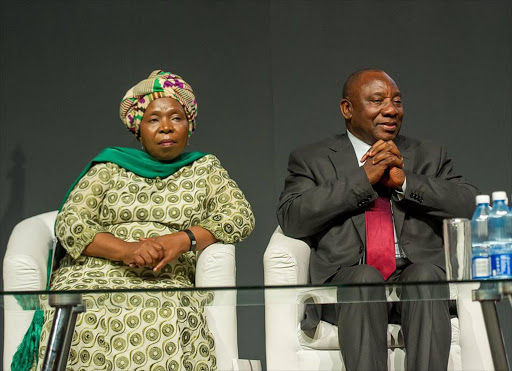 Tensions over who should succeed President Jacob Zuma as ANC leader flared into the open this weekend as the women's league effectively accused party bosses of sexism and double standards.

A war of words ensued between ANC Women's League president Bathabile Dlamini and ANC secretary-general Gwede Mantashe on Friday after Mantashe told delegates at the party's national general council that Luthuli House was investigating the recent women's league conference for "some deviant behaviour".

Mantashe, who was delivering his organisational report to the NGC, is said to have been referring to allegations that some delegates were bribed to vote for certain candidates at the women's league conference.

Now the league wants Mantashe to withdraw his "deviant behaviour" remark and Dlamini says it will demand that the words be expunged from the organisational report when the NGC meets for its final plenary session this morning.

The war of words came as Zuma told a Mail & Guardian reporter that he was not interested in serving a third term as ANC president.

"Even if they beg me I won't stand," he told the reporter.

While the league is openly campaigning for Dlamini-Zuma to be the 103-year-old party's first woman president, Mantashe is being touted as a future deputy to Ramaphosa by those opposed to a Dlamini-Zuma presidency.

Although Mantashe has not publicly said he wants to be deputy president, he told the Sunday Times yesterday that he would not avail himself for re-election as secretary-general in 2017.

"If you want to know about my third term, then I can tell you that I would die if I were to stand for a third term ... a third term for an SG will kill you even if you're ambitious. It's a stressful job."

The league was upset on Friday that Mantashe not only questioned the credibility of its conference outcome, but failed to mention its new leaders by name as he had done with other recently elected leaders of ANC-aligned organisations.

Late on Friday, Dlamini hit back at Mantashe, accusing him of singling out the women's league for criticism at the NGC because of its stance on a woman president.

"It can never be deviant behaviour ... I think that's very strong language that [male leaders] would not use [to define] their conferences. They fight a lot ... they also have groupings that support them, but they don't call that 'deviant behaviour'. They are brave enough to talk like that because it's women ... women are soft targets," she told the Sunday Times.

She added that the league would challenge Mantashe's report during the plenary session.

The league has differed with Mantashe, who has called on it and other structures to desist from discussing issues of leadership linked to the party's 2017 conference.

Dlamini also defended the "premier league" - a group of provincial premiers accused of trying to make themselves ANC kingmakers.

The three premiers - Supra Mahumapelo of North West, Ace Magashule of the Free State and David Mabuza of Mpumalanga - are said to be campaigning for Dlamini-Zuma to be the next president.

But Dlamini said the three premiers were not involved in any behind-the-scenes lobbying and those who labelled them the "premier league" sought to discredit them in the eyes of other ANC members.

"For me the premier league doesn't exist because those people are chairpersons of the ANC. The very people who are complaining about the [premier league] also have people who support them in other provinces. Why are they so worried about three people?

"The very same people who are complaining about the premier league were, at some stage, supported by the very same chairpersons," she said.

Dlamini made it clear that the league would not back down from making its wishes known on the matter of a woman president.

"Issues of the election of the leadership of the ANC are discussed by the structures of the ANC and they must know where we stand. As women we are ready.

Mantashe is no innocent bystander in the succession debate as his name has been bandied about in his home province, the Eastern Cape, as a potential deputy to Ramaphosa.

Magashule denied that he was part of any premier league.

"There is nobody in the NGC who has talked about the premier league, there isn't such thing, there aren't any kingmakers in the ANC. The kingmakers are branches of the ANC. I haven't lobbied for anybody ... I am a disciplined member of the ANC," he told the Sunday Times.

Meanwhile, Gauteng ANC chairman Paul Mashatile joined his counterparts in the Eastern Cape and KwaZulu-Natal talking down the premier league.

He dismissed it as a nonfactor, while also denouncing the use of money to "buy votes".

Mashatile, who fell out with Zuma ahead of the party's Mangaung conference in 2012 and was subsequently dropped from his cabinet, hinted that his province could throw its weight behind Ramaphosa's candidacy.

"Once President Zuma finishes his term, it means, truly speaking, that the position is open. So there may be other people who may have much more advantage, like the deputy president. But we can't say to other people you can't bring other names," he said.

A senior ANC leader in the Eastern Cape accused the premier league of attempting to destabilise a number of regions in the province.

"There is clear lobbying and [campaigning] with money by the premier league. They are factionalists campaigning for positions in the [national executive committee]."