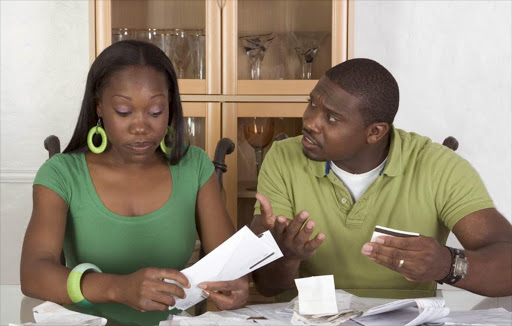 South Africans are headed into the new year with a debt hangover that's going to pound their heads far worse than any babbalas headache. And it's not going to get better.

Experts are warning that 2016 will be extremely tough on the pocket and that consumer debt is in a state of crisis. They cite rising food prices, likely interest rate hikes, a bleak jobs outlook and festive season splurging as factors that will hit consumers where they feel it most.

The housing market will also be under extreme pressure. And President Jacob Zuma's firing of Nhlanhla Nene as finance minister last month has dealt a body blow to the economy.

"It is going to be a tough year," said Cas Coovadia, MD of the Banking Association of South Africa. "People aren't managing their debt or making ends meet. We are in a situation where people are borrowing money just to put food on the table."

Economist Azar Jammine said: "A lot of damage has been done in the form of the collapse in the value of the rand. This will mean higher interest and inflation rates and those are bad news for consumers."

If Finance Minister Pravin Gordhan wanted to "maintain fiscal discipline", he would have to raise taxes significantly, Jammine said. That included a possible increase in VAT and in the fuel levy of about 20%, which would raise petrol prices by 50c a litre.

Already in 2014, South Africans were the world's biggest borrowers, according to the World Bank. Its Global Findex report found that 86% of South Africans took out a loan, more than double the global average of 40%. Research by debt management company Debt Rescue found that more than half of homeowners are struggling to pay their home loans, and just under 60% battle to meet credit card payments. Fewer than a quarter have any money left at the end of the month.

block_quotes_start People are very much in trouble out there... Preachers, attorneys, advocates - everyone is struggling block_quotes_end

FNB's John Loos, who analyses the property market, said home affordability had undergone "gradual deterioration" and this looked set to continue in 2016.

Interest rates were expected to tick up gradually this year, while "it seems unlikely that municipalities and utilities will stop above-inflation tariff and tax increases".

Loos said rising electricity costs and municipal rates and tariff increases that were running above income inflation meant that homeowners would struggle to keep their heads above water.

Debt Rescue CEO Neil Roets said: "People do not budget properly for the festive season. They overspend, and then in January there are expenses like school fees and uniforms, but no money. They then start to default on credit repayments, credit providers then take action, and the situation gets a whole lot worse."

He said South Africans were notorious for buying luxury cars and branded clothing they couldn't afford. Many seeking debt rescue had credit cards and store cards - both of which incur high interest rates.

There was also a psychosocial component to consumer debt because "it has a negative effect on families, relationships" and mental wellbeing. The biggest mistake people made was "trying to keep up with the Joneses".

Port Elizabeth attorney Wouter Minnie reported a recent increase in applications for debt review, including from professionals and those in the "upper middle class".

"People are very much in trouble out there," Minnie said. "Preachers, attorneys, advocates - everyone is struggling."

National Credit Regulator CEO Nomsa Motshegare said that if consumers wanted to begin the new year in a financially sound position, they needed to know how they spent their money during the festive season. They should provide for typical start-of-year expenses such as school fees, uniforms and stationery.

The NCR's latest figures, for the quarter ending last September, show that the number of credit applications dropped by 2%. However, secured credit, which is dominated by vehicle finance, increased by 7.8% from the previous quarter, while unsecured credit jumped 18%.

Food price increases, due to the drought and weaker rand, are expected to be one of the biggest headaches for consumers this year.

Over the past 12 months, the price of maize has nearly doubled to almost R4000 a ton. Wheat prices are also up. Jammine said this would push up the price of cereals and breads along with all other maize, wheat and soya products. Meat and poultry prices would also rise.

Consumers interviewed this week attested to the increasingly tough conditions.

A resident of Kenilworth, Cape Town, who did not want to be named, said: "I have tried to find ways to reduce the cost of our lifestyle. I have changed our car insurance - on two cars - from comprehensive to third party, fire and theft, and we have changed our medical insurance from comprehensive to a hospital plan. For us it might mean stopping private extramural activities for our sons, but for many other families it is about putting food on the table."

Anthony Griffiths, 45, of Pretoria, said: "I am planning to tighten my belt this year. I am hoping to use less electricity and water, and am going to eat out less and cook more at home. We are considering becoming a one-car family but are not sure if that can work logistically."

Ismail Hendricks, who got married last year, said he did not see any way in which he and his wife could cut down, except to delay having children.

Priscilla Moyo, of Philippi in Cape Town, said: "Right now I don't see how I could change my life to save money - I feel like I have done all I can."

"I chose to put myself under debt review," said Knysna-based communications consultant Martin Hatchuel, who lost two major clients due to a downturn in the regional economy. "The system is very favourable to the consumer and seems to have been carefully worked out by the banks. The important thing was that when I saw the train coming, I did something before it hit me."

"When above-inflation increases continue year after year, in the case of important and essential services, a backlash will eventually occur. Consumers are not interested in causes and constraints; in very many cases they are simply unable to afford the increases."

Neither the Department of Trade and Industry nor the National Treasury was available for comment.

DA finance spokesman David Maynier said not even the reappointment of Gordhan as finance minister could dispel the dark cloud hanging over 2016.

"We have to face the fact that Gordhan is not an economic messiah. Despite being in a stronger position than ever before, he will not have the political appetite, political weight and political space necessary to fundamentally change economic policy to boost growth and job creation."