Mineworker Themba Mnisi always assumed he would be the one to be trapped underground - he never imagined his daughter would suffer this terrible fate. 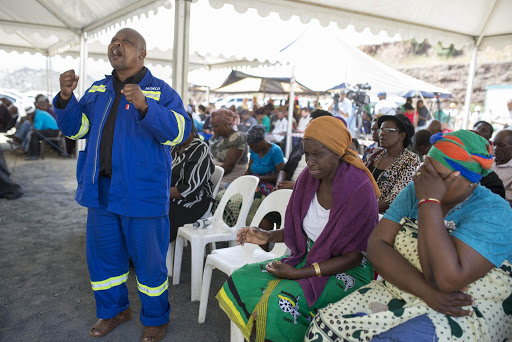 He also never thought he would be standing on the sidelines of a mine tragedy - desperately waiting for news that his child has been found alive.

"But it's all up to God now. It's upsetting, but I have to be strong for her," he said.

The 59-year-old's daughter, Yvonne Mnisi, 23, is one of three employees of Vantage Goldfields' Lily Mine rescuers have been frantically searching for over the past nine days. Yesterday, the operation had to be halted temporarily because of a second landslide.

Yvonne and two of her colleagues, Pretty Mabuza, 34, and Solomon Nyarenda, were in a mobile office that plunged 80m into a sinkhole when the road outside the entrance to the mine collapsed last Friday.

Since then, rescuers, including the mining company's operations director, Mike Begg, have been blasting their way through tons of rock and debris to a depth of 120m to try to reach the area where the office may be - all the while hoping to find the three still alive.

"I was happy she was working here, and never really concerned even though I know just how dangerous working at a mine can get. It's not for the faint-hearted," said Yvonne's distraught father.

Themba, a senior team leader at a different mine nearby, recalled the moment he arrived at Lily Mine upon hearing the news that his daughter was one of those trapped. He said he saw the familiar entrance to the shafts - except this time it had disappeared into nothingness. There was just a giant, gaping hole outside the entrance, surrounded by debris.

"Immediately I was willing to go down and be part of the rescue team, but they did not allow that," said Themba. "One cannot just sit back and watch helplessly as one's child is in there."

He said his daughter, a young mother of two, was quiet and respectful.

"She was always good to others and we raised her to fear the Lord.

"We never expected it to happen, especially because she was working above ground. I purposefully pushed her to work above ground because I knew the conditions underground and thought she would be better above.

"But only God knows why this happened, and we accept it."

By yesterday, Themba, a devout Christian, admitted he was hoping for a miracle. "I have placed what has happened in God's hands."

Yvonne's colleague, Mabuza, who is also trapped with her, is the mother of four children, including an eight-month-old girl. This was her first formal job after years of unemployment.

Rescuers have roped in sophisticated machinery in a bid to get to the three. But with each passing day, their families admitted that it was hard to cling to hope.

Pathologist David Klatzow said the health of the three workers depended on the level of available oxygen and water. "If there is some free flow of oxygen into the container they should be okay."

However, Klatzow said, they would have been dehydrated without water by day three and that "four or five days" without any water would be a major problem.

One survivor, who asked to be referred to only as Nkosi, said he just remembered a strange sound when the ground caved in last Friday. "That sound was unlike anything I have ever heard. It was absolutely horrifying.

"This is something that I can never forget and even now, a week later, I am still in a state of shock. I mean, just 10 minutes before, I had been on my way down to the shaft having left the office with those people inside.

"These are people we know and to now see their family members standing like that as if there is no hope is really traumatic."

Association of Mineworkers and Construction Union boss Joseph Mathunjwa has been helping with the search effort for just over a week and has remained on the site since last Saturday. He confirmed that rescuers were battling with the additional rocks and soil deposited by another ground collapse yesterday. Rescue teams included operators, management and labour, he said.

"We cannot risk any more lives, we're still waiting for the expertise from outside ," said Mathunjwa.

"The rocks we're encountering down there are huge and the equipment down there is limited. We only have two drills there and we were lucky that they did not break down more than necessary." He said rescue teams from various mines had been rotating throughout the week in the search.

"The environment there is dangerous. You go down there, you think twice about going back again. There are no elevators and we use steps, with no harness. That 140m feels like 10km.

"Yes, the situation is not really hopeful at the moment, but we still have to believe this is a rescue mission. God can make the impossible possible. Look at what happened in Chile. We cannot give up."

Mineral Resources Minister Mosebenzi Zwane visited the mine yesterday and announced that Vantage Goldfields would pay compensation of R50,000 to each surviving employee . The Mabuza, Mnisi and Nyarenda families would each receive R200,000.

On Friday, Gladys Nkambule, Mabuza's sister, said she was worried. "It's been seven days now. There is no move forward. It's tough. She loved her work a lot. She did not want to disappoint her bosses."

The last time the sisters spoke was over the phone last Tuesday when they discussed their date for the coming weekend. "We didn't know what the future held for us," said Nkambule.

Using special explosives, rescue workers have tried to blast their way through the huge rocks to get to the container.

"We've had a lot of challenges. There's a lot of heat and poor ventilation," said Begg. "We're working the machines very hard. There are no fans down there. It's humid and warm and we can't push a machine too hard and damage it. These machines are critical in the success of this rescue.

"We're all very desperate to get to them," he said on Friday morning as he left the mine to take a break after spending hours underground. "The weekend is a psychological thing for us. We need to keep the morale up," he said.

Mabuza's partner, Christopher Mazibuko, said she was supposed to start work at 2pm on February 5 but had been asked to swap her shift with a colleague.

Yesterday, after hearing that the rescue mission had been temporarily suspended, Mazibuko said he was sad. "It would be better if they carried on," he said. "They explained to us what happened but if they worked, we'd at least continue to hope that they'll be found." He said he would continue to pray.

• The rescue of 33 Chilean miners trapped underground for 69 days was watched by a billion people around the world. In 2010 the Copiapó mining accident happened in the afternoon of August 5. A cave-in at the San José copper/gold mine located in the Atacama Desert trapped 33 men 700m below ground. The men survived for a record 69 days before they were all brought to surface, alive.

It was the most significant rescue in recent years.

• In February 2014 nine miners died when a tremor caused a shaft to collapse at Harmony Gold's Doornkop mine near Krugersdorp, west of Johannesburg.

The tremor, measuring 2.4 in magnitude, resulted in underground rocks collapsing and trapping 17 miners 1733m below ground.

Rescuers were able to save eight workers but their efforts were hampered by an underground fire.

• In 1993, 53 miners were killed at Sasol's Limited Middelbult Colliery in Secunda in Mpumalanga during an underground explosion.

An inquest later found that the disaster was caused by poor ventilation and poor standards of air-borne dust.

The rescue operation at Lily mine is being run by Mine Rescue Services South Africa, a non-profit organisation that works primarily in the mining sector.

It relies on highly trained personnel and specialised equipment for effective rescue operations.

A senior member of the organisation's team dispatched to Lily mine said 30 teams, each with up to eight members, have been working in shifts around the clock in the bid to get to the three mine employees trapped underground for the past nine days.

The teams had worked in tough terrain underground and were fortunate to have natural ventilation down there, he said.

''We are utilising road-rescue equipment such as a sky jack that has a cable instead of a rope to lift heavy loads."

The Lily mine mission has required them to blast through rock and debris to try to reach the mobile container in which the three mine employees are believed to be trapped.

In addition, the mine rescue group has use of a trapped-persons locator device. A highly sensitive instrument, it can locate any type of sound made by an accident victim and thereby help rescuers to reach him or her.

The rescue team member said his heart went out to those affected by the Lily mine tragedy.

''Today [Saturday] is day eight and people need to understand this is a huge task. In one evening we moved 2,000 tons of rock," he said.