For the sake of your country, Mr President, GO NOW!

ANC veterans are calling on President Jacob Zuma to step down, with Nelson Mandela's fellow Rivonia trialist Andrew Mlangeni saying he avoided news of the Nkandla matter for the sake of his health. 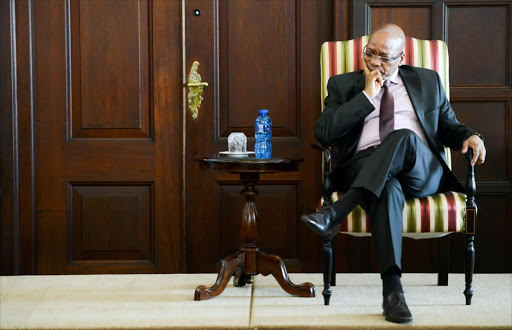 Among those making the call are former ambassadors and cabinet ministers - some of whom served in government with Zuma or under his presidency.

Robben Islander Ahmed Kathrada fired the first salvo yesterday, with his peers echoing his sentiments and piling pressure on the ANC to act against its president.

The calls come after the Constitutional Court handed down a judgment on Thursday that was critical of Zuma's handling of the public protector's report on renovations to his Nkandla home. It found that his failure to implement her remedial action violated the constitution.

The ANC is scheduled to hold a crucial extended national working committee tomorrow to discuss the implications of the judgment. This will be followed by a gathering of the ANC's parliamentary caucus on Tuesday to be addressed by secretary-general Gwede Mantashe.

The judgment was handed down on the day Mantashe and other members of the party's top six met with a group of Umkhonto weSizwe veterans who had called for an early elective conference.

A former minister in Zuma's cabinet, General Siphiwe Nyanda , was part of the delegation . He said the veterans were concerned about the matter of the Constitutional Court judgment.

"We are worried about that ruling. In fact, we think it is a very serious ruling ... it impacts upon the integrity of the president and other arms of the state. I have not discussed it with the signatories [of the memorandum that called for an early conference]," Nyanda said.

The veterans join a growing number of voices calling for Zuma's head - including the country's biggest opposition parties, the DA and EFF.

Mantashe told the Sunday Times that the party's highest decision-making structure between congresses - the national executive committee - did not have the power to recall Zuma.

But ANC veteran Denis Goldberg said Zuma should have resigned long before the court handed down its judgment. "He should not demand that the NEC should recall him, or the ANC caucus must. He should do the right thing and resign. That would save the trouble of impeachment proceedings going ahead. It would save the embarrassment and would allow the ANC to proceed with its historic task to reconstruct. He has no options, in my opinion. The c ourt has said he cannot be relied upon."

Another ANC veteran, former ruling party MP and ex-ambassador to Ireland Melanie Verwoerd, said: "For the sake of the country, and for the sake of the ANC in the run-up to the local government elections, a change of leadership is required."

This week, Kathrada issued an open letter to Zuma in which he asked the president to resign.

"I know that if I were in the president's shoes, I would step down with immediate effect. I believe that is what would help the country to find its way out of a path that it never imagined it would be on, but one that it must move out of soon.

"To paraphrase the famous MK slogan of the time, there comes a time in the life of every nation when it must choose to submit or fight. Today I appeal to our president to submit to the will of the people and resign," wrote Kathrada.

Former National Assembly speaker Frene Ginwala said it was up to the ANC to recall the president. "The ANC will have to decide what it wants to do and who it wants to vote for. If the ANC needs to or wants to elect a new president, then it will have to call a conference," she said.

Former cabinet minister Zola Skweyiya, who was also a high commissioner to the UK, urged the ANC to call a special NEC, rather than the top six officials taking a decision on the matter. "I do not have a specific view to share on the way forward, but I would abide by an NEC decision," said Skweyiya.

But Mantashe said no NEC meeting had the power to remove Zuma, according to a resolution adopted at its Polokwane conference in 2007.

The resolution reads: "At national government level, Conference agrees that the ANC President shall be the candidate of the movement for President of the Republic. The prerogative of the President, premiers and mayors to appoint and release members of cabinet, executive councils and mayoral committees should be exercised after consultation with the leadership of the organisation."

However, the party's constitution says the NEC may recall any public representative.

Mandela's fellow Rivonia triallist, Mlangeni, said he avoided the news because the Nkandla issue had a negative impact on his health and he could therefore not comment on the matter. "I can't get myself involved in these controversial matters when my health is not so good. It will affect my health," Mlangeni said.

Zuma's backers hit back, saying they still had full confidence in him as state president.

Deputy Minister of Defence and Military Veterans and national chairman of the Umkhonto weSizwe Military Veterans Association Kebby Maphatsoe said: "We still have the confidence in the president of the ANC. We respect the judiciary ... but our understanding, it was based on the public protector's remedial action. The president has been saying he wants the correct institution to tell him how must he pay. Now that the Concourt has pronounced itself, the president has agreed that he will pay for things which are not security-related features."

ANC Youth League president Collen Maine said the league respected the court judgment, but was fully behind Zuma. Asked if the ANC should take any steps against the president, Maine said: "What steps?"

In Thursday's judgment, the court was highly critical of Zuma's decision to instruct Police Minister Nathi Nhleko to conduct his own investigation into Nkandla, and that of parliament to form ad hoc committees. Both processes absolved Zuma of any wrongdoing.

Following the judgment the party's top six leaders held an urgent meeting in Pretoria on Friday. Emerging from the meeting, Zuma shifted the blame to his legal advisers, telling the nation in his televised special address that it was never his intention to not "comply with the remedial action taken against me by the public protector or to disrespect her office".

"I wish to emphasise that I never knowingly or deliberately set out to violate the constitution, which is the supreme law of the republic," said Zuma. "I wish to reiterate that any action that has been found not to be in keeping with the constitution happened because of a different approach and different legal advice."- Additional reporting by Neo Goba and Penwell Dlamini