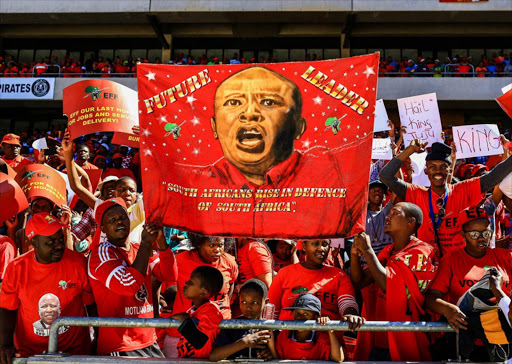 The Sunday Times can reveal that Mahlobo and Hawks head Berning Ntlemeza have had several meetings to discuss criminal action they want taken against the EFF leader.

The ANC this week laid a complaint of "high treason" against Malema and the Hawks have since confirmed that they were investigating.

But Malema is not taking it without a fight. He told thousands of EFF supporters gathered at a packed Orlando Stadium yesterday for his party's manifesto launch that he was ready to take on Mahlobo.

According to a cabinet minister privy to the plans against Malema, Mahlobo wants him arrested, and believes that he and Ntlemeza can convince national director of public prosecutions Shaun Abrahams to prosecute the EFF leader.

"I think he must spend two or three days in jail ... We must show we are serious. We are waiting for Shaun Abrahams. He will decide when [the case] is ready for trial.

"Malema can't be reckless ... You cannot threaten a state ... We have to be serious even if it is against one of our own," said the minister, who refused to be named.

Mahlobo earlier this week confirmed that the State Security Agency was investigating Malema.

The investigation stems from Malema's remarks during an interview with Al Jazeera that the EFF "will run out of patience very soon" and "we will remove this government through the barrel of a gun".

Addressing 40000 party supporters in Soweto yesterday, Malema said he was not scared of war or violence.

He dedicated the tail-end of his speech to Mahlobo, whom he dubbed as a "small boy" and a "not intelligent intelligence minister".

"I want to tell Mahlobo, 'Go and look after your health. You don't look healthy,'" he said.

Malema said in all his years in the ANC he never knew Mahlobo, or Police Minister Nathi Nhleko - two seemingly powerful members of cabinet.

"We are ready to take you on at any time," he said.

Malema said his party never threatened violence but its peaceful protests were met with violence by the state.

"Every time we fight [peacefully] we are met with violence," he said.

Malema also alluded to the possibility of a coup because "the army does not want this government".

"Soldiers are going to turn their guns against you," he said, addressing President Jacob Zuma.

He said the EFF would ensure Zuma leaves office whether he likes it or not.

The Hawks are said to be under pressure to conclude their investigation and to hand the case over to the National Prosecuting Authority for prosecution.

"The matter is being looked at and once completed will be taken to the NPA for a decision," said Mulaudzi.

Mahlobo said he would not want to respond to Malema just yet.