His name is Peter May, and the collars of his dapper blue shirt have been ironed flat. 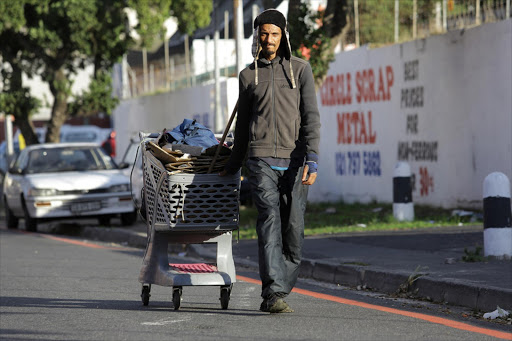 Ryan Morgan outside a scrap yard where he sells his paper and metal after collecting it from dustbins
Image: Ruvan Boshoff

"I have the same name as an English cricketer," he says, pulling a trolley that bulges with rubbish bags.

But he is not a cricketer, and for him the waste inside the bags is not garbage. It is his livelihood: bundles of white paper, cardboard, newspaper and light steel sifted from bins and landfill sites across Cape Town.

They divert recyclables away from the landfills at no, or little cost. Now their fate hangs in the balance as the waste economy sets off on a new path.

According to a report by the Centre for Scientific and Industrial Research (CSIR), the waste and recycling sector "is on the brink of change" thanks to mandatory extended producer responsibility, which means producers will be responsible for the waste they generate. This often takes the form of a reuse, buy-back or recycling programme.

The CSIR has done research to see if waste pickers can be incorporated into the formal economy, and Professor Linda Godfrey, who led the study, said: "The most surprising finding for me was when we started to attach financial values to the savings by municipalities as a result of informal waste pickers."

With paper and packaging, for example, a staggering 80-90% of waste is recovered by the pickers, and it is estimated that each picker diverts up to 24 tons of packaging waste a year. Cardboard gets them about 80c/kg, plastic R2, newspaper 40c and light steel 70c.

After 2009, when the South African Waste Pickers' Association was formed, many formed co-operatives, a model of integration favoured by the Department of Environmental Affairs.

Godfrey, however, said 92% of co-operatives had failed and their members had returned to picking on landfills.

"What must be done in the short term is to move pickers off landfill sites, where they reclaim recyclables, often with considerable health risks."

This could be done only by diverting recyclables "through separation at source and kerbside collection programmes".

For many, however, kerbside collection comes at a price, with neighbourhood watches demonising waste pickers and encouraging residents to keep bins behind high walls until the trucks arrive.

Much of the recycling happens out of view, however, with many waste pickers saying they walk up to 40km to make sure they drop goods off at the right places.

"About 12 or 13 guys a day come here," says Zainab Abrahams, manager of Town Scrap Metals in Lansdowne, Cape Town. "Each brings in around 7kg. They come with cardboard, white paper, and newspaper. I don't take plastic though, it is too messy."

Department of Environmental Affairs spokesman Albi Modise said that "extended producer responsibility would be in place for e-waste, lighting and the paper and packaging waste streams in 2017/18".

Integration of waste pickers into the formal system "will depend on the readiness of each municipality" and what is "suitable for their circumstances".

He added: "We do want to ensure the protection of waste pickers as vulnerable workers."

Waste Pickers could soon be redundant

I left my permanent job and now I earn more

"I look in a bin and I can tell you - this one needs one-and-a-half minutes, this one needs five minutes." By 8am, Peter May's trolley is weighed down.

He likes working on his own. "I had a permanent job but I left," says May, 42. "I stopped working because people were lazy and the manager did nothing about it. I can't do the work of five or six people."

He starts at 5am and takes a break after three hours. "I earn more now than I did working for someone else because I work so hard," he says.

Come rain or shine, I must support my family

I have seen too many people dying from cold

Ronelle Filies, 37, who sleeps outside Claremont police station, always puts on her apron before going through the bins. She hits the streets Monday to Friday at 5.15am, based on where Cape Town's garbage trucks will be picking up refuse. At her side is Raymond Jacobs, 43.

"I want to change my life," he says. "I have seen too many people dying from the cold winter."