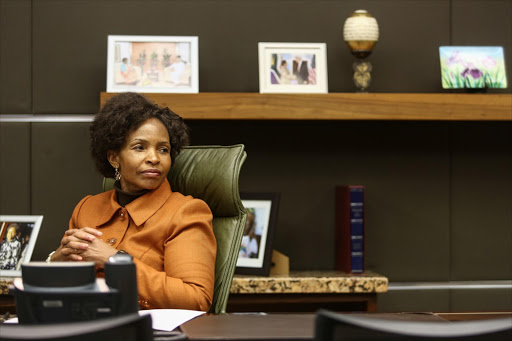 International Relations Minister Maite Nkoana-Mashabane said she was acting in "defence" of the country when she shot down questions put to her during an interview with Al Jazeera last week.

The minister was criticised for her "bizarre" answers to many of the questions.

Speaking to the Sunday Times this week, Nkoana-Mashabane accused Dutton and the network of deviating from the agreed focus of the interview. She said Dutton had asked her "derogatory questions" about President Jacob Zuma.

"Instead of it being a good interview about the Middle East and South Africa, she asked nothing about Qatar. Zero," said Nkoana-Mashabane

"I waited for the focus on the brief and it wasn't coming. We were now discussing when is President Zuma resigning. And I had to respond in kind.

"The reality is that she [Dutton] is a South African who happened to have been an anchor for Al Jazeera and she really took the gloves off and became a South African in opposition rather than a journalist," said the minister at OR Tambo House in Pretoria this week.

Dutton is an experienced TV news presenter who started her career at the SABC before moving to e.tv. She later worked at CNN and CNBC. She joined Al Jazeera in 2009.

Neither Dutton nor Al Jazeera had responded to questions at the time of going to press.

Nkoana-Mashabane said she had bonded well with Dutton before the interview.

When the cameras started rolling and Dutton asked the minister about political and economic problems back home, the minister lost her cool.

Throughout the 22-minute dialogue, the minister came across as combative, impatient and unwilling to answer direct questions.

As the storm over the interview grew, some officials at the international relations ministry suggested that fatigue might have had something to do with the minister's performance.

block_quotes_start She really became a South African in opposition. And I had all the reasons to defend my country block_quotes_end

They pointed out that Nkoana-Mashabane had landed in Doha, after a 10-hour flight, shortly before the interview. She went directly to the studios for it.

In April this year, EFF MP Mbuyiseni Ndlozi called Nkoana-Mashabane a "sleepist" after she was caught napping in parliament.

Nkoana-Mashabane insisted this week that fatigue had nothing to do with her responses to Dutton's questions.

"It really had absolutely nothing to do [with] my fatigue.

"Well, I never rest, but rest was not a problem.

"The questions were about the speculations at home; she really became a South African in opposition. And I had all the reasons to defend my country.

"By the way, diplomacy is not about being sheepish; it's about defending your country and what you believe."

What about the water can and the "hole in the head" that the minister seemed to be obsessed with during the interview?

As a nine-year-old in a rural village in Magoebaskloof, Limpopo, Nkoana-Mashabane said she suffered a head injury while carrying a 25-litre bucket of water on her head. Like most villages during apartheid, hers had no running water.

"I do have a wound in my head because I should not have been ... my mother said I was very competitive, she did not force me, but I did not want to carry a smaller one, so in the process it did hurt me."

She said Dutton belittled that experience because, as a white South African, she had never needed to carry water on her head.

But why did she refuse to answer a question on which candidate she preferred in November's US presidential election? Hillary Clinton or Donald Trump?

Nkoana-Mashabane said it was not her place to tell Americans who to vote for.

She pointed out to the Sunday Times that she had a close relationship with Clinton, who was her counterpart as US secretary of state from 2009 to 2013.

"There's no secret that we had a very good relationship and good rapport," she said.

"And I also felt honoured that she dedicated half a page of her book to our relationship.

"But as to who should become president, if you ask me the question when I am at home, I will answer the question, but while I am at work, I will give you a diplomatic answer," said Nkoana-Mashabane.

International Relations Minister Maite Nkoana-Mashabane gave a very different interview with Al Jazeera Arabic than the notorious one she gave to its English sister station.

During a visit to Doha, Qatar, last month where she accompanied President Jacob Zuma on a state visit, Nkoana-Mashabane gave an interview to Al Jazeera Arabic's Abd al-Samad Nasir in which she stuck to the script of talking about South Africa's role in the Middle East.

She began the interview, in English, which was translated to Arabic, by noting South Africa's approach to international relations, peace and security.

She spoke about 22 years of freedom, and its foreign policy principle of respecting the sovereignty of other countries before the interviewer asked a question about South Africa's position on Syria.

Nkoana-Mashabane made reference to third-party influence and other states meddling in the situation in Syria.

She spoke of the violence perpetuated by Islamic State in Syria and questioned where and how the group was funded.

"You see brand-new Toyota vans but you don't know who is paying for it. We don't know where they come from but they use it," Nkoana-Mashabane said.

In the 22-minute interview, Nkoana-Mashabane only referred to the ANC once, when talking about the party's support for the people of Palestine.

She said the ANC resolved at every conference to stand by the people of Palestine.

The interview ended with the minister talking about the government's efforts to deliver basic services to the people, saying that the government needed a little more time to fully deliver on its promises.

She did not make any bizarre comments about a "hole" in her head, as she did in the English interview.