A South African professional hunter accused of taking part in the sanctioned culling of 2‚000 hippos in Zambia says he’s been wrongly identified as the villain in a drama that is infuriating animal rights activists across the globe. 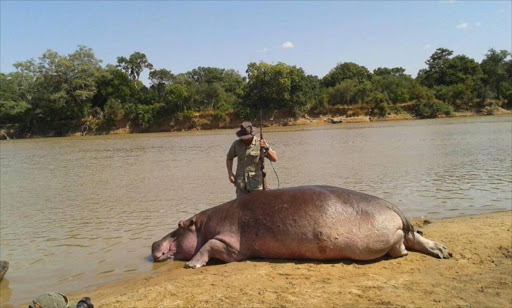 Photos of a hippo being shot and skinned have garnered mass outrage on social media.
Image: Born Free/ Handout

Mass outrage is being vented on social media after images depicting an unidentified hunter‚ holding a rifle‚ standing over a slain hippo were posted to Facebook.

The photographs‚ which also depict the hippo being skinned‚ were leaked by a whistle-blower after being lifted off the Facebook page of an employee at the Zambian Department of National Parks and Wildlife.

Limpopo hunter Theo de Marillac‚ who operates Theo de Marillac Safaris‚ was then named as the shooter – a claim that his lawyer Marco Martini vehemently denied on Thursday.

“I want to tell you that false allegations have been made against my client. He was nowhere near Zambia at the time and that is not him in those pictures is‚” said Martini.

According to the De Marillac Safaris’ website‚ the company offers hippo-hunting packages where participants receive “the rare and exciting opportunity of participating in a controlled hippo hunt in Zambia’s upper and lower Lupandi.”

At a cost of R181‚300‚ hunters receive a “seven day safari including seven hippos”‚ according to the web page.

De Marillac‚ a former pupil of St Stithians College in Johannesburg‚ was in no way involved in the controversial cull in Zambia‚ said Martini.

Leading wildlife organisation‚ Born Free International‚ has condemned the move to cull 2‚000 hippos over the next five years‚ despite it being sanctioned by the Zambian Department of National Parks and Wildlife (DNPW). The DNPW had not responded to questions emailed from TMG Digital.

Commenting on an article posted to the Born Free Foundation’s Facebook page about the cull‚ readers appeared to be utterly unimpressed: “They kill these wonderful creatures because they can. A disgusting show of power and wealth by people with a great deal of money and no intelligence‚” commented Elizabeth Tull.

“The human race thinks that this planet and all that's on it or in it is theirs to do what they want with. Narrow minded‚ arrogant and ignorant. Oh and those with the most money obviously get first shot (literally) at whatever is up for grabs‚” John Durham added.

While Linda Rutledge commented; “There are no excuses just senseless killings from greedy people. When is this all going to stop? These creatures are so very precious!”

Will Taves OBE‚ Born Free President and Co-Founder‚ said in a statement that there were many questions about the “abhorrent activity” that needed answering.

“At a time when wildlife populations of multiple species are under extreme pressure across much of Africa‚ many‚ including Born Free and our supporters around the world‚ fundamentally question the logic of killing thousands of hippo‚ and turning the flood plains of the Luangwa River Valley into ‘killing fields’‚” he said.

“I am sure the hippo cull‚ along with Zambia’s decision to re-instate trophy hunting of lions‚ will cause many to question whether Zambia is the right wildlife safari destination for them. I urge the authorities to call a halt to the killing with immediate effect‚” he added.

Hippopotamuses are classified as a vulnerable and decreasing species on the International Union for Conservation of Nature’s Red List of Threatened species.