An elaborate illegal chrome-mining operation in rural Limpopo has shipped out chrome worth millions of rand, with the blessing of local headmen - and the government is powerless to stop the plunder. 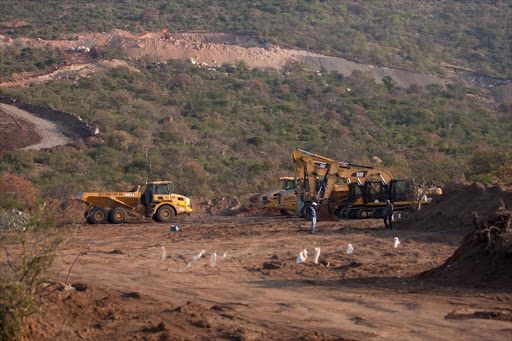 Operators are mining chrome in Tjibeng Village in Limpopo with the apparent blessing of local headmen.
Image: SIMPHIWE NKWALI

Mining experts estimate the illegal miners may already have extracted 360,000 tons of chrome, with an estimated value of R500-million.

The Sunday Times could not establish this week how many illegal operators are mining, or how much chrome is being taken.

But throughout the day, luxury cars with Limpopo, Mpumalanga, and Gauteng registration plates pulled in and out of the mines. Some trucks had plates from Mozambique.

A copy of a cash flow statement belonging to one of the operators showed his company had made R1.5-million in two weeks, having moved 7,000 metric tons of chrome.

To get a stake in the chrome rush, a one-off R250,000 payment is made to one of six community trusts made up of headmen, their councils and community members. Prospective miners also have to employ locals as general workers at a monthly salary of between R3,500 to R4,000.

In broad daylight, heavy-duty trucks, tippers, excavators and drill rigs litter the countryside at the village, near Burgersfort in Limpopo's Sekhukhune district. The illegal mines even have site offices and boom gates manned by security guards.

The Department of Mineral Resources had been aware of the problem since last year, spokeswoman Ayanda Shezi said, and had visited the sites to try to stop the activity.

However, local headmen "authorised" the operations. They claim to have Bapedi King KK Sekhukhune's endorsement.

Behind the scenes, however, infighting and court battles rage.

Mampuru confirmed that Sekhukhune had appointed community trusts to oversee legitimate mining operations in the area and keep a watch on illegal ones.

This, he said, was after he had been approached by concerned community members, who alleged that strangers were mining there.

"There is no way the king would be involved in any illegal mining. These are our lands and we have been acting to make sure no illegal mining is taking place," he said.

At the centre of the free-for-all are two mining companies, Hlabirwa-Pheladi Mining CC and Nulane Investments, which were successfully interdicted by Sekhukhune late last year from mining in the area. Hlabirwa's permit to mine lapsed last year and Nulane's two years ago.

Department of Mineral Resources officials were confronted by a "complex" situation with "criminal elements", Shezi said.

"There is already an interdict sought previously by a third party. The only way to approach this matter is through a direct visit with the law enforcement agencies while also awaiting the outcome of two court cases already under way as brought by third parties," she said.

The department had formed a compliance and enforcement unit, to work with law enforcement to combat illegal mining, Shezi said.

Several sources confirmed that the illegal mining started in the second half of last year.

Reporters posing as potential "investors" discovered that the syndicate includes traditional leaders and employs about 400 people.

Members of a four-man committee representing the community, which doubles as site supervisor across 10 illegal sites in the area, demand a R10,000 salary each.

Local community trusts demand R50,000 a month from the companies.

Thokwane Moloto, a lawyer from the area, claimed the scheme went all the way up to the king.

The Sunday Times was shown letters - ostensibly from the king - appointing two trusts as caretakers at two of the farms.

One, dated April 19 2016, reads: "This appointment gives the Trust authority of interacting with any legal operating company on the farm and report to the King. The trust must ensure that the Kingdom benefit from any mining-related operation on the farm."

Moloto, whose brother Piet Moloto is the local headman in Tjibeng, said: "The whole area there is full of machines and these people are not talking to anyone."

The mining has led to violent infighting that has driven him to open several criminal cases and approach the courts to interdict Sekhukhune and his followers from harming him. Sekhukhune had appointed a parallel leadership, he said.

"They are undermining the authority there. They don't want to see him [Piet] because they say he is disturbing their business there." Adviser Mampuru said the community trusts were set up after members of the community complained about illegal mining, saying it was Moloto and a client of his involved in illegal mining. He produced court orders from last year interdicting Moloto's client from mining in the area.

Colin Malatjie, deputy chairman of the Tjibeng community committee, said operators came from all over the country and some were working with international partners.

Fellow committee member Calvin Moloto said: "The way we modelled our projects is such that the community at large is benefiting in the form of employment. This is not like white people coming here with their own people and mine, leaving us even poorer with no knowledge of how much wealth they are making."

The community was using natural resources to "fight off poverty", he said.

Moloto has opened criminal cases over an assault during a community meeting last year.