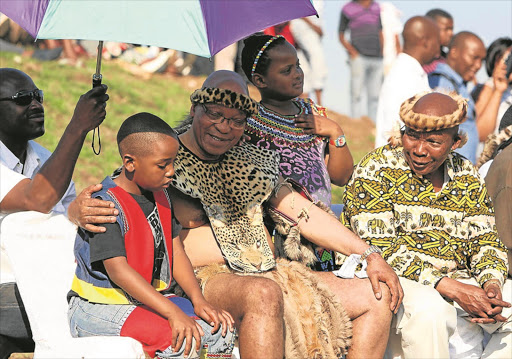 President Jacob Zuma with his children Snqumo and Thandisile during the wedding of his eldest son, Edward, at the family homestead in Nkandla at the weekend. The president's brother Mike Zuma is seated on the right.
Image: JACKIE CLAUSEN

"The Zumas are not wealthy people," President Jacob Zuma's younger brother Michael told the Sunday Times in an emotional interview this week.

His comments come after the National Treasury on Monday slapped President Zuma with a R7.8-million bill for the nonsecurity upgrades at Nkandla.

"If they want him to pay, I do not know where he is going to get the money. He has not spoken to us about this matter and we have only learnt about it in the news," said Michael. He said the Zuma family lived the life of any rural family.

In a separate interview with the Sunday Times, Zuma's eldest son, Edward, also claimed that the family would not be able to afford the hefty bill that the president needs to pay personally. "We are not a rich family," he said.

As the deadline looms for Zuma to pay back the money for improvements to his rural homestead, wealthy businessmen who previously publicly committed to helping Zuma repay his debt are now cautious about stumping up the cash.

ANC insiders said many business people were unwilling to donate millions to Zuma given that his term was coming to an end. "What will they get in return?" said a source who asked not to be named.

And ANC secretary-general Gwede Mantashe has stated that the ANC has no plans to collect money for its beleaguered president: "The Concourt is quite clear, the ANC cannot pay whatever amount. A structure of the ANC cannot do that because if it's traced and found to be that, it will be in contempt of court."

It also emerged this week that the first family, particularly the president's wives, fear that Zuma will be sent to jail now that more than 783 counts on charges of fraud, corruption and racketeering against him have effectively been reinstated after the High Court in Pretoria refused to grant the National Prosecuting Authority leave to appeal against the "spy tapes" judgment.

A teary Michael, who met the Sunday Times outside a butchery at the modest Durban Station precinct on Friday, said the president's family did not have millions lying around. He said the Zumas were misunderstood and just because his brother was president it did not mean they were rich.

"Contrary to what many people believe, the Zumas are not wealthy people. That is why you are also finding me at this modest place," he said. He and his wife had just loaded their groceries into the boot of an old Volvo sedan when the Sunday Times arrived.

Edward, in a separate conversation later the same day, echoed his uncle's sentiments.

"If I had money myself I would pay for him and relieve him. But the family will meet ... and chart the way forward and see if there's a way to pour in all our resources to help him," he said.

"We are not a rich family, perhaps if we were rich we would also be fighting these things and taking people to court. We are a family of hustlers and hard workers."

block_quotes_start Sometimes I look at him and suspect that he's changed, all these things have changed him, changed his reasoning and he is not OK block_quotes_end

Zuma has until August 24 to settle the bill.

The claims of poverty by Michael and Edward are contradicted by the number of businesses several Zuma children are involved in.

Edward himself has a number of business interests in construction, engineering and oil. In 2011, he treated himself to a R2.5-million wedding - although reports revealed that he struggled to pay his nuptial bills.

Duduzane, 34, is perhaps the wealthiest of Zuma's children. He has a stake in at least six active companies, valued at hundreds of millions of rands.

He is a director at Gupta-owned mine Shiva Uranium, South Africa's only dedicated uranium mine, which is valued at R14-billion on the JSE.

In 2011, the Sunday Times reported that Duduzane was living in a R4-million home on Saxonwold's Griswold Drive. His fleet of cars at the time included a R2-million Porsche 911 Turbo and a R500,000 Chrysler 300c.

Duduzane had not responded to written questions by the time of going to press.

Zuma's nephew Khulubuse is also a wealthy businessman with interests in transport, mining and oil. He is also believed to have shares in companies in Africa.

At one stage he owned about 20 cars, including a Rolls-Royce, a Bentley Continental GT and a Mercedes-Benz SLS 63.

But Khulubuse told the Sunday Times he would not be able to help his uncle settle the bill. Speaking through his spokesman, Vuyo Mkhize, Khulubuse said he had always been careful to not be a beneficiary of his family's success.

"Khula will not be in a [financial] position to personally assist him," said Mkhize.

Khulubuse confirmed he would attend a family meeting expected to take place today.

There has been a lot of confusion about whether the president is permitted to receive donations towards the Nkandla payment. Chief Justice Mogoeng Mogoeng's ruling stated he had to pay the bill "personally".

Advocate Wim Trengove SC, who represented the EFF in its Constitutional Court application against Zuma, said the judgment allowed Zuma to receive donations to pay the bill. But, Trengove said, the president would have to declare the donations received and pay donation tax. "He may not receive money for favours, because that is corruption," he said.

Among the wealthy pro-Zuma businessmen who are now cautious about making any financial commitments is Vivian Reddy.

This week Reddy told the Sunday Times he had not offered to pay any amount and had not yet decided whether to assist . He had not been formally approached to do so.

In 2012, Reddy said he would assist the president and had in fact lent him the money for the first phase of the Nkandla renovations.

Reddy once paid close to R500,000 to spend a few hours sitting next to Zuma at an ANC fundraising dinner.

block_quotes_start We are afraid he could go back to jail. This issue has made me lose sleep and I have sleepless nights block_quotes_end

Even ANC leaders known to be loyal to Zuma this week said the president and his family would have to sort out the bill themselves.

"Our decision is to respect the court order in the sense that the court pronounced itself that the president must pay by himself," said ANC North West provincial secretary Dakota Legoete. "Our position is that we must allow the president together with his family to raise [the money]."

But a KwaZulu-Natal ANC leader, who asked for anonymity, said business people and ANC leaders "would not want to invest in a man on his way out".

He added that some business people, especially those who had supported Zuma during his protracted court battles, seemed to have had a change of heart because "the taps are dry" - in other words, the potential for patronage is coming to an end.

The Sunday Times sent detailed questions to Zuma's spokesman, Bongani Ngqulunga. He responded with the statement issued by Zuma's office earlier this week, stating that there had been no request for donations by the Presidency.

Estimates show Zuma would have to commit almost three years of his R2.8-million salary to repay the debt.

While the Zuma family worry about how to raise the R7.8-million, it emerged that they were also concerned about the High Court in Pretoria's ruling on the "spy tapes" judgment.

Michael said there were real fears that Zuma's 783 counts on charges of corruption might be reinstated.

If this were to happen, Michael said, it would bring back the pain they felt when Zuma was in prison on Robben Island from 1963 to 1973.

"We are afraid he could go back to jail. This issue has made me lose sleep and I have sleepless nights. His wives are the most concerned and vulnerable. They constantly ask me for direction and as the eldest [at home] I always have to go out of my way to assure them," he said.

Michael said the president was hugely disturbed by all the trouble besieging him.

"Sometimes I look at him and suspect that he's changed, all these things have changed him, changed his reasoning and he is not OK. I know him. I am his brother," he said.

Michael said that even though Zuma hardly spoke about his work and political life, he could tell that his brother was feeling the pressure.

"It's reached a point where we live in great uncertainty. This is not the brother I know. The brother I have always known is the one that cracks jokes, a brother who loves women, his wives and his children, not a brother they say is corrupt. We do not know a corrupt Mhlanganyelwa [one of Zuma's names] in the Zuma household," he said.

"Hardly a day goes by without me thinking about him and how he would fight the storms."

He said the real story of the Zuma family was yet to be told. "Sometimes the family does want to tell their side of the story, their suffering and their concerns."