Tearful Blade ready to call time on the SACP

SACP general secretary Blade Nzimande has given the strongest indication yet that he will not be a candidate when the party holds its elective conference next year. 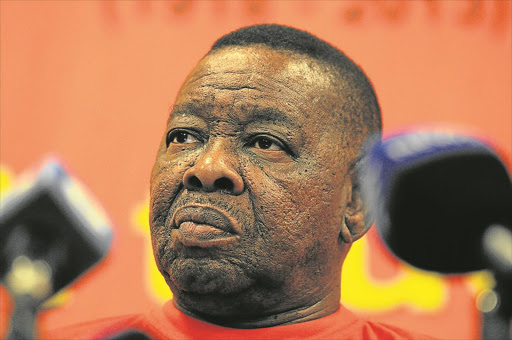 Nzimande - who supported President Jacob Zuma's rise to power, although they have since fallen out - said yesterday he had served at the helm of the party for long enough, and it was time for new leaders.

His comments are expected to spark a fierce succession debate in the party.

"I think I have been here for too long," he told the Sunday Times on the sidelines of a Police and Prisons Civil Rights Union meeting.

"That is my feeling ... The SACP must continuously renew itself."

This is the first time in the 18 years he has held the position that Nzimande has indicated he wants to step down. But he will have to convince his backers as some want him to stay.

Although talk of succession has often been muted in the organisation, one of the strongest contenders to take over from Nzimande is SACP second deputy general secretary Solly Mapaila.

Mapaila's candidacy is supported by most of the party's provincial structures and the Young Communist League.

In previous interviews, Mapaila has backed Nzimande to continue as party general secretary.

Nzimande broke down in tears while addressing the meeting in Kempton Park after he was presented with a key to the SACP's new headquarters in Johannesburg's city centre, which was bought by Popcru.

"I always wanted that before I leave SACP, it should have its own building," a tearful Nzimande said.

The SACP is currently housed in Cosatu's headquarters and has been accused of freeloading off the trade union federation.

Nzimande's comments on renewal in the party come at a time when party leaders are questioning its role in the ANC-led tripartite alliance.

He made reference to a discussion among party leaders about the liberation movement [ANC] "capturing" the SACP and whether the political appointment of SACP leaders was a means by which the ANC was co-opting these leaders, thereby weakening the party.

In the past, the party has been quick to insist that this is not the case.