On the eve of the International Aids conference in Durban, we look back at the country's rocky road to managing HIV

The early 2000s were a terrible time when a plague of biblical proportions swept through South Africa. The HIV and Aids pandemic claimed the lives of 330,000 people, between 2000 and 2005, indiscriminately killing old and young alike.
Image: Per-Anders Pettersson/Getty Images

At the end of 1998, just more than a year before the first International Aids Conference was hosted in Durban, Aids activist Gugu Dlamini was stoned, stabbed and beaten to death by a mob of men. Her crime? Disclosing her HIV-positive status.

Eighteen years on and Durban is ready to host its second International Aids Conference. This time, on the final night of the conference, delegates from around the world will flock to the majestic Playhouse theatre to watch the world premiere of the musical In My Own Voice.

It is a story of hope and courage, written and performed by Musa "Queen" Njoko. She is South Africa's only recording artist living openly with HIV. She is one of the country's earliest Aids activists and lived down the road from Dlamini in KwaMashu.

The story of these two women began in the same way. Both were told they would die from Aids; neither had access to treatment; both were single parents; both became activists. Most significantly, both revealed their status when it was dangerous to do so.

Njoko told her story to the local Zulu paper, Ilanga. It made the front page, and led to her boyfriend chasing her and threatening to shoot her.

Dlamini told her story on radio and TV. She was beaten up by a neighbour and although she reported him to the police no action was taken. That night she was attacked by a mob of men and died in hospital the next day. 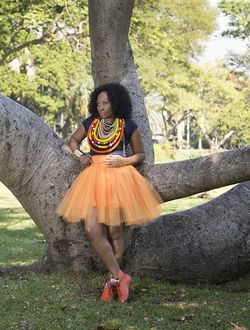 Musa ‘Queen’ Njoko is living with HIV and wrote the musical to be performed in Durban.
Image: Harry Lock

Said Njoko: "I was acting provincial co-ordinator of the National Association of People living with HIV/Aids. Gugu was in our support group. She was one of us."

Njoko says her faith took her through the worst of it. She was evicted from her church, ostracised by parts of the community and lived through four bouts of TB.

"After Gugu's murder I felt scared. I couldn't believe that people could be that cruel. At the same time I found more strength. I said to myself, 'Even if it means dying I am not going to be silenced, I will not give in.'"

Today Njoko is a popular gospel performer and motivational speaker. Her musical, "the story of my 22 years of grace", boasts a five-piece band, a cast of 16 and is choreographed by her son Thami Njoko.

Dlamini's daughter Mandisa was 13 when her mother was murdered. Today she is an Aids activist and founder of the Gugu Dlamini Foundation, in KwaMashu, which is committed to fighting the social stigma attached to people living with HIV.

If her mother could see the progress made, she would be proud. "She would probably say that her death was not in vain. I look at women who remind me of my mom, those from her generation like MaMusa, and I think, maybe she would be like her - strong and successful.

"She would be so proud to see the work of other activists, to see the changes - we talk openly, we have access to treatment and no one is being stoned."