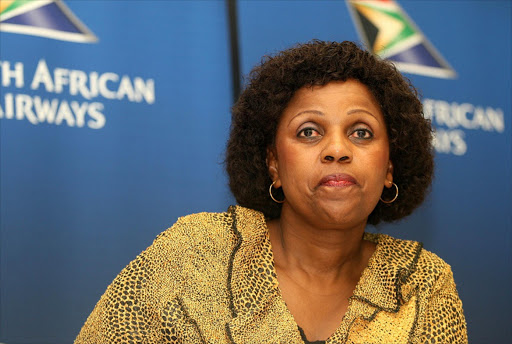 SAA boss Dudu Myeni wants controversial "boutique financier" BnP Capital to score a R50-million cancellation fee for its dubious debt-sourcing deal with the airline that was scrapped this week.

The Sunday Times has seen evidence that Myeni was the only board member to approve the fee.

Two months ago the unknown finance house was awarded a R256-million deal to source R15-billion in debt funding for SAA. The deal never went out to tender, the company did not have a valid Financial Services Board licence and SAA's treasurer said it could be done at a fraction of the cost.

This week the national carrier terminated the deal after an internal review.

Despite this, on July 7, the same day that Business Day exposed the irregular deal, Myeni supported a recommendation that BnP Capital be paid a cancellation fee.

Board members Yakhe Kwinana and acting CEO Musa Zwane did not support the recommendation, while John Tambi refrained from voting.

Myeni, who enjoys a close relationship with President Jacob Zuma, denies she has any ties with BnP Capital or its CEO Daniel Mahlangu - who did not reply to repeated requests for comment this week.

block_quotes_start To ease the process of finding common ground among the parties, we propose that the cancellation fee be R49.9-million exclusive of VAT block_quotes_end

In a previous interview Mahlangu described his company as a "boutique financier" that was "known in the market" and insisted that all queries about procurement processes be referred to SAA.

Documents obtained by the Sunday Times include a confidential memo to the SAA board compiled by interim chief financial officer Phumeza Nhantsi on July 4.

It recommends that BnP Capital be paid the cancellation fee "that the transaction adviser will require should SAA terminate the mandate of sourcing funds".

The memo points out that BnP Capital was mandated by the SAA board on May 24 to source the funds to pay off the airline's R15-billion debt.

"Subsequently the company acknowledged the receipt of the mandate but it came with a cancellation clause," Nhantsi's memo says.

"The cancellation clause stipulates that should SAA terminate the mandate before the fulfilment because of matters/issues outside of BnP Capital's control, then SAA should pay a R49.9-million cancellation fee which is equivalent to 26.6% of the fees."

The figure is just below the R50-million threshold requiring board approval.

On July 7, when news of the BnP Capital deal broke, SAA's board voted via e-mail on whether it should accede to Mahlangu's demand for the fee.

Mahlangu had previously asked for a 50% cancellation fee, but this was dismissed as too expensive by SAA.

A little before midnight Myeni wrote: "Does this need board approval? If so, I approve it."

Kwinana said: "The cancellation fee should have been included as part of the bid and the amount be included as one of the factors to consider in evaluation and adjudication and be compared with all the other bids, which may, with this inclusion, be cheaper. In view of this I do not support this round robin."

Two senior sources at the airline said Myeni had put pressure on airline executives to ensure that BnP Capital was awarded a cancellation fee and suggested that it should be R49.9-million.

But Nhantsi wanted the issue escalated to the board, which had appointed BnP Capital in the first place.

BnP Capital motivated its demand for a cancellation fee on the grounds that it had "put together a dedicated team of professionals" and its fund-raising efforts included "consultation with its global partners [which] entails continuous incurring of both man hours and disbursements".

Its global partners included China Development Bank and Grissag AG, which has been "tasked to find a total of R15-billion from its various long-term investments across the globe".

"Following concerns by SAA that the cancellation fee we requested is high we have now consulted with Grissag AG and the issue is the substantial cost of its penalty to us if we cancel," Mahlangu wrote on July 4.

"So to ease the process of finding common ground among the parties, we propose that the cancellation fee be R49.9-million exclusive of VAT. Please let us know if lower (sic) amount will be agreeable by and acceptable to SAA."

He said Grissag could not have sought any penalty from BnP Capital because there was no agreement in place.

"There was never any deal signed, they had asked for a quotation and the quotation was submitted, not to BnP Capital but to SAA," he said.

"I've actually never met anybody from BnP Capital as such ... As of yet nothing has happened and no contract has been signed."

Van der Merwe said Grissag AG had told SAA that funds were available from overseas investors, but the airline had insisted on working through a "South African entity".

"The reason for that was that they [SAA] did not want to borrow money in US dollars," said Van der Merwe.

On Friday the Sunday Times visited BnP Capital's office at Tuscany Office Park in Sandton. It was locked, with no sign of a "dedicated team" at work.

Mahlangu has failed to respond to several calls, an e-mail and WhatsApp messages over the past two weeks.

Two weeks ago the Sunday Times reported how BnP had misrepresented itself to SAA.

The misrepresentations included failing to inform the airline of its suspended licence and the listing of former business partner Vonani Mathebula as a "senior project director" without his knowledge.

SAA spokesman Tlali Tlali confirmed that a recommendation to pay Mahlangu a R49.9- million cancellation fee had been forwarded to the board on July 7 but it had not been carried through. He would not confirm or deny that Myeni was the only person to vote in favour of paying the fee, or comment on claims that she had put pressure on executives to do likewise.

"Decisions are usually a by-product of discussion, consultation and/or engagement. Arguments are presented on any matter and get duly considered," said Tlali.

"SAA does not discuss voting patterns on how its decisions and/or resolutions are made."

Myeni did not respond to several messages.