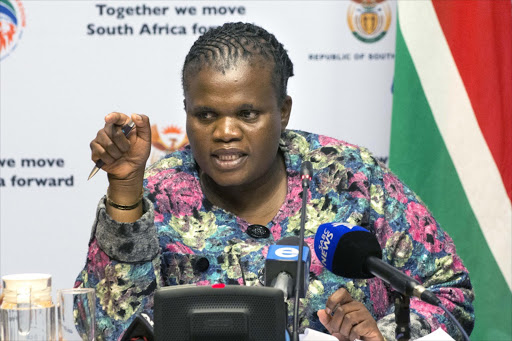 When she declined, the minister backtracked on her decision to appoint her as chairwoman of the Independent Communications Authority of South Africa, insiders claim.

Batyi confirmed this week she was taking legal action against Muthambi for failing to appoint her as chairwoman of Icasa, despite having given her a letter of appointment.

"I am taking the minister to court. She will get the papers when they are ready," Batyi said.

She declined to comment on claims that she had been asked to approve a TV licence for Infinity Media, which is part-owned by the Guptas, as a condition of her appointment.

It was one of five companies vying for a free-to-air digital broadcast licence at the time Batyi was handed her letter of appointment.

Icasa rejected all the applications in March for failing to comply with its requirements and has not yet issued a new invitation to apply for the licence.

It is understood Infinity Media's application was rejected because its foreign ownership exceeded Icasa's 20% threshold. Essel Media has a 35% stake.

A variety of programming rather than just news was required, and its application contained insufficient evidence of investment in local content.

The latest controversy surrounding Muthambi follows her assertion this week that there was nothing wrong with the SABC's policy of not covering violent protests and the outcry was "propaganda by commercial media houses".

Earlier last month, Icasa ruled that the policy was unlawful.

Nominations for Icasa councillors are vetted by the National Assembly, which submits a shortlist to the communications minister who appoints eight councillors and a chair.

The Sunday Times has established that on December 4 last year Muthambi sent Batyi a letter appointing her as chairwoman for one year, even though the Icasa Act stipulates a five-year term.

Two independent sources, one with direct knowledge of the offer, said that on December 6 Batyi was summoned to a meeting with Muthambi and told her appointment was conditional on her approving Infinity Media's application for a licence.

Muthambi told Batyi her job came "with conditions" and she had been appointed only for a year to "prove herself", sources said.

Batyi refused to approve the application, the sources said.

The next day Batyi received a second letter from Muthambi saying she could only commence her duties as chairwoman once her appointment had been gazetted. But in April, when Muthambi gazetted a list of four new councillors, Batyi's name was not included.

Infinity CEO and shareholder Nazeem Howa said: "There is no truth in these allegations."

Muthambi's spokesman, Mish Molakeng, said "the ministry refuses to be drawn into such spurious allegations".