The standoff between President Jacob Zuma and the National Treasury over who should lead SAA is propelling the airline into an unprecedented crisis, with a major international destination threatening to ground all flights in the next two weeks. 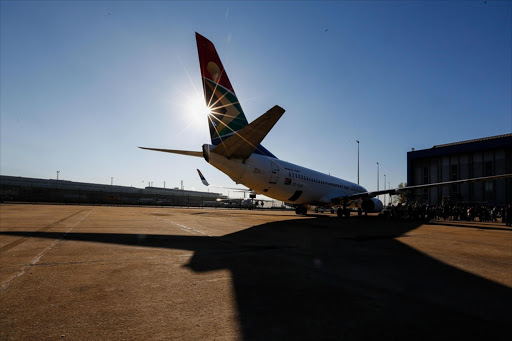 This Boeing 737 operated by SAA made aviation history this week as the first commercial flight in Africa to use jet fuel derived from plant material. SAA and Mango used the biofuel, made from a type of tobacco called Solaris, on flights between Johannesburg and Cape Town on Friday. The plants are being grown in Limpopo by Sunchem SA.
Image: MOELETSI MABE

Hong Kong's registrar of companies has given the airline until September 6 to submit its annual financial statements or face possible deregistration, which would mean SAA would no longer be able to fly there.

The airline, which has endured scandal after scandal for the better part of the year, is unlikely to meet this deadline as a critical guarantee from the Treasury has yet to be provided.

The guarantee would allow the airline to renew its going-concern status, get its financials passed by parliament, and continue borrowing money to survive.

The Sunday Times understands that Zuma has ignored two proposed board suggestions from Gordhan and his predecessor, Nhlanhla Nene.

Nene's proposed board would have replaced Zuma's personal friend Dudu Myeni as chair, while Gordhan's list is believed to envisage removing Myeni from the SAA board altogether.

Adding more pressure on the beleaguered airline are problems with the Air Services Licensing Council which requires financial statements and a consumer guarantee from SAA. This allows passengers to be reimbursed if an airline goes bust.

Andries Ntjane, a member of the council's secretariat, confirmed SAA's guarantee would expire at the end of next month.

If it cannot meet the deadline "the council will assess the reasons and take a decision", he said. "If they feel the reasons aren't adequate they can revoke the licence."

The Hong Kong notice, which was given to the airline on Monday last week and which the Sunday Times has seen, says SAA, through its failure to submit its financials for 2016, is in contravention of several sections of Hong Kong's Companies Ordinance. Failure to comply by September 6 could lead the registrar to strike SAA off its registry, the letter said.

"That will mean even our licence to operate will be affected," said a senior SAA source.

"Our customers who have already bought tickets will have to be refunded, among other issues."

The airline operates a daily flight to Hong Kong, which is also a critical connecting link to Latin America and mainland China.

The source said reputational loss would be even greater. "Hong Kong is one of our international routes that is profitable and we will suffer a huge loss in revenue ... the International Air Transport Association will also announce this to other airlines, which means that every other company doing business with us will want to work on a cash-upfront basis," said the source.

Gordhan has in the past spoken about the collapse of governance and the leadership crisis at SAA, where six of the 12 board positions are vacant, while Zuma has heaped praise on Myeni for her leadership.

Last month the president acknowledged the management and board needed beefing up.

A few days later Gordhan asked parliament for a fourth extension of SAA's deadline to submit its financials, saying he hoped everything would be concluded by September 15.

This week Gordhan said there were no strained relations, but that the issue was about governance. Speaking through spokeswoman Phumza Macanda, Gordhan said he hoped the matter of the board would be resolved quickly "to give SAA the appropriate levels of corporate governance and leadership - both at the level of the board and management. SAA is a national asset ... We are all required to do the right things now. Future generations will condemn any mismanagement and lack of diligence."

The impasse between Zuma and Gordhan has reached a critical point for even the ANC, which discussed the issues at its national executive committee meeting last week.

Secretary-general Gwede Mantashe linked instability at state-owned companies to the party's poor showing in the local government elections this month.

The SAA crisis was also on the agenda at the cabinet's lekgotla this week, said two senior government sources.

"The finance minister and the president can't agree on the candidates," said one source.

"This is getting urgent because without a board being appointed we cannot release the guarantee," said another source.

SAA spokesman Tlali Tlali did not respond to direct questions about the Hong Kong letter, saying SAA fully understood the impact of any possible service interruption. "Consequently, the airline will spare no effort to ensure we are compliant and continue to render services to our customers."

Macanda said the airline had made the Treasury aware of the Hong Kong issues this week.

She downplayed the impact of losing Hong Kong, saying SAA had made losses running into hundreds of millions every year since 2013 on the route, and that creditors could only call in government guarantees if the airline was in default for more than 30 days.