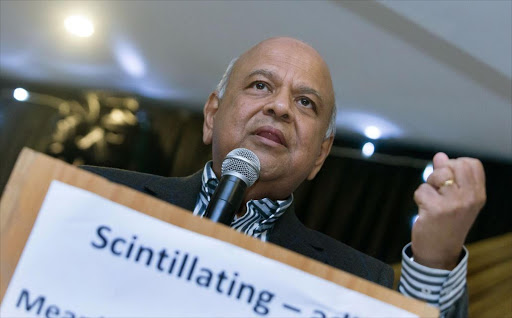 Finance Minister Pravin Gordhan addresses the eThekwini Ward 65 Branch fund raising dinner at the Savera Hotal in Durban on Saturday night.Gordhan said," There are good people being persecuted and thats wrong.Its wrong.It's wrong for persons like Ivan Pillay, Robert McBride and many others to be persecuted in the way they are being persecuted after giving offering their lives for the movement."
Image: RAJESH JANTILAL

Finance Minister Pravin Gordhan said that if corruption in the country came to a halt‚ fees for university students from poor backgrounds could be paid for.

This was shortly after Professor Jonathan Jansen said that there was “no hope” for South African tertiary institutions.

During the debate between the minister and Justice Malala‚ the political commentator and Financial Mail columnist‚ on Wednesday night in the Cape Chamber of Commerce & Industry’s second Rumble in the Urban Jungle this year‚ Gordhan said that much of the country’s pressures could be put at ease if we “just stop some of the corruption.”

“We can very easily pay for some of the things we are pressured for at the moment - fees for university students who come from poor backgrounds‚” Gordhan said.

He went on to add that if “you pay the right price for the coal that you buy‚ if your tenders are priced correctly‚ if you don’t engage in the wrong kind of property deals in this part of the world and elsewhere… If you end even a quarter of that‚ we’ll get R30-R40 billion‚ that the poor will benefit from.”

This while outgoing University of the Free State vice chancellor‚ Professor Jansen said that there is no hope for South Africa’s universities.

Jansen said with confidence at a luncheon he hosted at the Cape Town Club to discuss current events on Wednesday‚ prior to his departure for the United States‚ that in the next 10 to 15 years‚ “the top 10 universities in this country will look like the bottom 10.”

“There are two realities‚ the one is that the government doesn’t have money‚ you don’t need to be an economist to understand that‚ when the economy doesn’t grow‚ there is no money‚ period.

“And the second is a student body that doesn’t want to pay for anything. I am not judging the two factions‚ what I am saying is that you depend of us to make sure the university still stands and I am telling you now‚ that there is no hope for South African Universities‚” Jansen said.

But Jansen said that one of the ways of overcoming the student fees dilemma would be for government to “stop passing the buck.”

“Stop holding vice-chancellors hostage‚ and universities hostage‚ and make a decision about the fee increase with the proviso that the education of the children of the poor must be free‚ everybody else must pay and whatever loans are given into the system must be recouped in an efficient way through SARS‚” Jansen said.