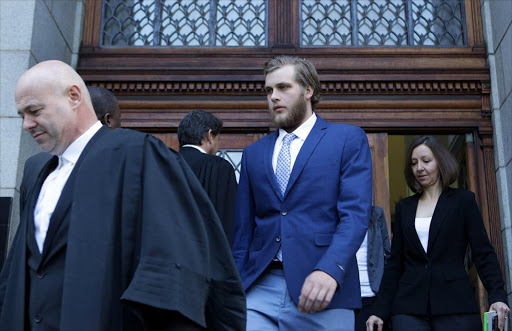 None Henri van Breda leaves the High Court in Cape Town on Friday.

When a team of digital sleuths analysed Henri van Breda's iPhone, iPad and MacBook Air they caught a whiff of drugs.

And drugs were behind the family murder accused's first court appearance this week.

The 21-year-old and his girlfriend Danielle Janse van Rensburg appeared in the Cape Town Magistrate's Court on Tuesday for possession of dagga, three days before Van Breda's appearance in the High Court in Cape Town for allegedly murdering his father, mother and brother using an axe.

Lorinda van Niekerk, Van Breda's lawyer, said: "I confirm that Henri and his girlfriend were arrested on Monday and appeared in court for possession of a small amount of dagga.

"His girlfriend got bail and Henri was kept overnight and released the following day.

"His girlfriend has admitted in court that the dagga belonged to her. Henri maintains that he is not guilty of the charge against him."

A source with intimate knowledge of the investigation said specialist officers extracted all the data on Van Breda's electronic devices. "They found a chat which looked like there was drug involvement," he said.

In February last year, the Sunday Times interviewed a man living in an informal settlement near the Van Bredas' upmarket home at De Zalze Winelands Golf Estate who claimed to have been Van Breda's drug runner.

Hours after Van Breda appeared in the High Court in Cape Town on Friday for the murder of mother Teresa, father Martin and brother Rudi, as well as the attempted murder of sister Marli, news broke of his drug arrest earlier in the week.

He was released on R1,000 bail on the drug charge and Janse van Rensburg was granted bail of R200.

News of the drug arrest surprised one of Van Breda's best friends, Alex Boshoff, who might be called by the state to testify in the murder trial.

The last time the friends saw each other was at a braai shortly before Van Breda handed himself over to police in June.

Boshoff, a Stellenbosch University student, said he would "speak the truth" if he was called to the witness stand.

A bearded Van Breda looked confident during his high court appearance on Friday for a pre-trial hearing.

Clad in a blue jacket, white shirt and tie, he appeared unfazed by the media throng and gazed ahead during the brief proceedings before Judge Elize Steyn.

Galloway asked that the matter be postponed to November 18 for another pre-trial hearing.

She said the state needed time to obtain reports and to furnish the defence with documents. The provisional trial date was set for February 6.

The court also heard that Xhosa interpreters would be required for some of the witnesses on its list of more than 140 people. Advocate Pieter Botha, Van Breda's counsel, did not object to the postponement.

Prosecution spokesman Eric Ntabazalila said after the hearing the state would speedily provide the defence with the information it had requested.

"The incidents are more refined now after we went through the docket thoroughly," he said.

Van Niekerk confirmed police were investigating the theft of a laptop and two bags stolen from the boot of her car.