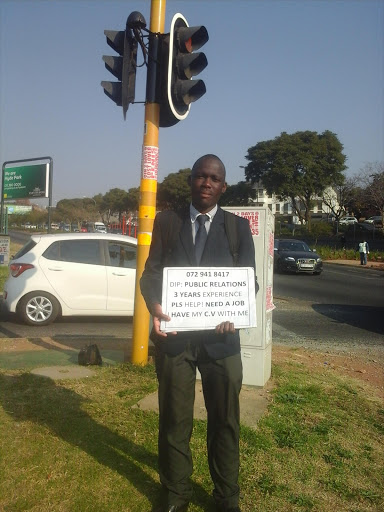 Hector Hlanganisa Mbatha has experience writing speeches for government after a stint with the International Relations Department and degree in PR, but can't land a permanent job. Now he's trying to catch the attention of employers by standing at Johannesburg's Hyde Park corner with his CV.
Image: Julia Madibogo

Getting hired in South Africa can be a serious challenge given the country’s unemployment rate of 26.6% and a trend towards declining employment in the formal non-agricultural sector.

There are many possible routes job seekers can take as they seek to enter the workforce. Some are clearly marked out, facilitating a smooth transition.

Others are not very clearly marked and are fraught with difficulty, leading to uncertainty and often significant personal hardship.

Individuals and groups access the labour market from different points of departure, depending on their skills, occupations, age, race and gender.

This means that it’s not always useful, or accurate, to think about one labour market that operates in the same way for everyone.

Rather, there are many labour markets in which diverse factors such as geography (rural, urban), degree of formality (formal, informal) and political economy (centre, periphery) play a defining role.

We compared insights on this diversity and complexity across a set of research projects conducted by the Labour Market Intelligence Partnership. What we found was that social networks and inequality matter a lot in the world of job seekers. This suggests that there is a need for formal public mechanisms to ensure that there’s a fairer distribution of information for people looking for work.

A recent study traced the widely divergent journeys of graduates from two very different universities in South Africa. It followed 469 graduates from Rhodes University and 742 from University of Fort Hare through their degree programmes and into the labour market.

block_quotes_start To promote more efficient job search strategies at all levels, the quality and accessibility of formal labour market information needs to be raised significantly. block_quotes_end

Another study of public attitudes to work found that work-seekers used a range of ways to access the labour market. Ninety percent of those surveyed said that social networks were the “most frequent” way to look for work.

This trend isn’t unique to South Africa. Research on job searching globally shows that for a while personal networks have been recognised as an efficient tool to use when looking for employment.

The study on attitudes to work and unemployment also found that job seekers from rural areas were more likely to rely on informal networks, talking to relatives and friends. It notes that

How do formal public systems contribute?

How then do formal public employment services in South Africa measure up, to promote transitions to the labour market?

A study done in 2015 looked at employer interaction with a government-funded employment service that matches job seekers to employers.

The research found that job seekers used a diversity of search methods.

Subscribing companies filled 56% of all their vacancies with work seekers registered on the system.

But the service is hampered by a range of obstacles including poor infrastructure, which leads to incomplete records being kept, and network failures that make the system painfully slow. This affects its reliability.

These barriers effect the extent to which both employers and work seekers rely on the system as a route to the labour market.

Social networks remain a default method of job search for many South Africans across the labour market spectrum. But the ability to access social networks is shaped unequally by the education, class and race background. This is particularly the case for high-skills jobs that require a university qualification.

For job seekers living in poor rural areas social networks are less helpful. This is why formal public mechanisms are important, particularly for those looking for low-level skilled jobs.

To promote more efficient job search strategies at all levels, the quality and accessibility of formal labour market information needs to be raised significantly.

This first appeared in The Conversation