SABC's comedy of errors in Havana

What was supposed to be a scoop for the troubled SABC turned into a Caribbean holiday for a large group of its journalists and technicians when coverage of Fidel Castro's death went pear-shaped. 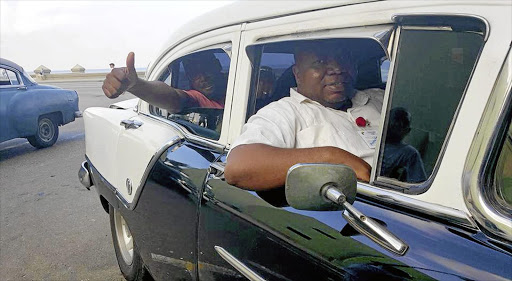 Shortly after the news that the veteran revolutionary had died and that President Jacob Zuma would flyto Cuba to pay his respects, the SABC decided to send three teams to Havana to cover the events.

But it has now emerged that most of the 15 journalists and technicians who were sent, at a possible cost of about R1-million, did little more than tour the Cuban capital, taking pictures and posting them on social media.

They could not cover Zuma's speech, delivered to thousands of Cubans during a rally at the Plaza de la Revolución on November 29, as the three-person reporting team assigned to cover the president missed their connecting flight in New York.

However, SABC insiders said the reporters and cameraman could not help it because their SAA flight to New York had been delayed. The SABC had to rely on a news agency to broadcast Zuma's speech live.

The day after the team - known as the presidential press corps at the SABC - landed, Zuma flew back to South Africa, leaving them with little to do.

But then the SABC decided to send in a second team led by head of TV news Nothando Maseko, acting political editor Sophie Mokoena and director of live broadcasts Paul Molefe.

This team was supposed to be responsible for the coverage of Castro's funeral on December 4.

When this team arrived in Havana via Paris, Zuma was already back in South Africa. They also discovered that equipment they needed to do live broadcasts had gone missing.

SABC staffers questioned the organisation of the whole trip, saying the public broadcaster wasted about R1-million. They also questioned the logic of sending Mokoena and Maseko when, as senior managers, they had no major reporting role to play.

"What were Sophie and Nothando doing there? They were just there, they hardly did any work," said one SABC staffer.

Another said the second team could not do a live crossing because of the missing equipment, which might have been confiscated by Cuban authorities.

The SABC teams also struggled to transmit pre-recorded packages to Auckland Park as Cuban authorities limited their access to the internet.

"It was not just us, other broadcasters had problems as well, they also had access to the internet blocked," said another employee.

But SABC spokesman Kaizer Kganyago said the broadcaster was happy with the work done by its staff as they were able to produce "at least three stories a day" despite the loss of some equipment.

"Yes, some luggage bags were lost by the airline but that did not stop the team from working and sending stories," he said.

He defended the decision to send Maseko and Mokoena, saying the assignment needed senior editorial and technical staff, and denied that the coverage had cost R1-million. But he was not willing to say how much the state broadcaster would have to pay.

Kganyago said that although SABC staffers missed Zuma's address, "we still did not miss the stories. We managed to broadcast the story of President Zuma addressing the crowds at a rally in Cuba."

But only Dlamini-Zuma, Nzimande and Malema were interviewed in Cuba. Mbeki and Zuma were recorded in South Africa.

Kganyago said the SABC had sent two teams from South Africa and one from its UN bureau in New York because of the magnitude of the event and its significance for Africa.

"Given the fact that we broadcast to 50 African countries, SABC news management saw fit to cover this historic event in a manner that would cover both current affairs programmes and news programmes," he said. Kganyago denied that some members of the team were effectively on holiday.

"All ... did their part, both editorial and technical. Given the time difference, our team slept very little, if at all, while in Cuba," said Kganyago.