Top terror bomber bust on his way to SA 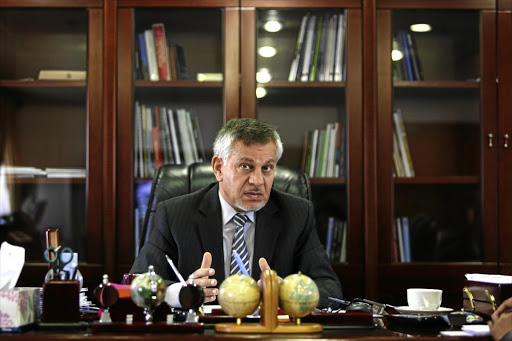 A bomb maker working for the Islamic State terrorist group was arrested at a Turkish airport last month as he was about to board a flight to Johannesburg.

The suspect, an Iraqi named Abu Osama, was allegedly planning an attack in South Africa.

"Our intelligence officials believe Abu wasn't coming to South Africa to recruit for IS, but to identify a specific target that would later be attacked," Iraqi ambassador Saad Kindeel told the Sunday Times.

Osama's arrest took place shortly after immigration officials at OR Tambo flagged another suspected terrorist entering South Africa from Turkey. He was originally from the US.

The two incidents have sparked concern that South Africa might be facing an increased risk of terror attacks, specifically on US-based businesses and buildings.

Speaking on behalf of acting police commissioner Khomotso Phahlane yesterday, Hangwani Mulaudzi said: "We are aware of the two incidents. One was dealt with by immigration officials at OR Tambo, where a person coming from the US via Turkey was flagged and sent back to Turkey."

"We are also aware of the later incident in Turkey where a person was arrested as he was about to take a flight to South Africa. Interpol confirmed the incident and we are still waiting for their full briefing," Mulaudzi said.

The incident in Turkey was confirmed this week by Kindeel.

He said Iraq had more information on the planned attack in South Africa by Osama, but he could not share this with the South African government until it had signed a memorandum of understanding with Iraq in which both countries agreed to share security information.

"I am surprised the South African government is taking its time to sign this memorandum. We are providing the information for free, which can be used to protect its citizens," the ambassador said.

State Security Minister David Mahlobo confirmed the incident at OR Tambo airport and said Kindeel had notified him about the arrest in Turkey.

"I am not delaying the signing of this memorandum of understanding. We take any terror threat very seriously. I am in the process of setting up a task team that will deal with these terror threats and interrogate the information from the Iraqi ambassador."

Mahlobo said his men had always been on high alert.

He said the man who was identified at OR Tambo airport had flown in from a country in the Middle East.

"He wasn't arrested as he didn't commit any crime in South Africa and was not wanted for any criminal activities elsewhere."

block_quotes_start I had orders to move to South Africa through Khartoum in Sudan.  I was then arrested at Ataturk airport at the end of last year.

Mahlobo said extremist groups were recruiting people with clean records so they were not easily identified.

"They are clean with no dodgy past," he said.

IS is known for extreme brutality, including the beheadings and crucifixions of prisoners.

In an interview with Sunday Times this week, Kindeel said Osama had been arrested at Ataturk airport in Turkey as he was about to board a flight to South Africa. The arrest took place late last month and Osama is being held by Iraqi officials in Baghdad.

A source in the South African security services with direct access to anti-terror investigations said: "South Africa will not be the victim of any attack, but I believe there is a risk against foreign assets in South Africa."

He said there were many IS-linked foreigners receiving training in South Africa and recruiting here for the organisation.

US embassy spokeswoman Cynthia Harvey would not comment on whether the US was aware of the arrest in Turkey or on Osama's alleged plans to launch an attack in South Africa.

"As in all cases related to intelligence matters, we are not able to provide comment on this case," she said.

She confirmed that a terror alert regarding South Africa issued last year was still in force. She said it was based on information that terrorist groups were planning to carry out "near-term attacks against places where US citizens congregate in South Africa".

Kindeel said Iraqi intelligence officials had told him that during interrogation, Osama had confessed to planning an attack on the US air base at Incirlik in Turkey.

He had recruited a suicide bomber for the mission. He said his next target would be in South Africa.

The Incirlik air base is also used by Nato forces and the Turkish air force. Nato has used the base for airstrikes against IS.

"Our intelligence officials believe Abu wasn't coming to South Africa to recruit for IS, but to identify a specific target that would later be attacked," Kindeel said.

He said Osama, who is an engineer, had been planning to flee Turkey after being tipped off that his cover was blown.

According to Middle Eastern news sites quoting the Iraqi federal judiciary authority, Osama told his captors that he had attended Mosul University, graduating as a civil engineer and worked with a German company that built roads and bridges in the northern Iraqi city.

He moved to Germany for a short time to continue his studies.

Following his return to Mosul, he was unemployed for a year and a half.

"Most of the companies left Mosul because they were concerned that IS extremists would occupy the city," he reportedly said in his confession.

"After IS occupied Mosul, I heard that [IS leader] Abu Bakr al-Baghdadi had called for people with expertise to join the Islamic State and I decided to join the group in one of the famous mosques in Mosul. Then we were divided to different groups."

The Arabic news site almasalah.com quoted the federal judiciary authority as saying that Osama told officials: "I had orders to move to South Africa through Khartoum in Sudan.

"I was then arrested at Ataturk airport at the end of last year."

Security analyst Jasmine Opperman, a director of the Terrorism Research and Analysis Consortium who previously worked for the State Security Agency, said the threat of an IS attack in South Africa was real.

"The call is to stay wherever you are and use whatever means available to execute an attack where you are, and that this will be seen as equally important as going to the caliphate in terms of showing your loyalty," she said. "South Africa is entering this phase."

While she had no specific knowledge of Osama's alleged plot to attack South Africa, it "sounds definitely plausible".

Information from foreign intelligence agencies, including Iraq, about terror threats to South Africa "must always be verified for credibility and reliability", she cautioned.

The Muslim Judicial Council's Ihsaan Hendricks said he could not comment "on this particular incident", but added that South Africa could not be "naive".

"I believe it [an attack in South Africa] is highly possible," he said.

If proved that Osama was planning to come to South Africa to organise an attack "we can no longer live in denial".