As the bitter debate on the proposed sugar tax rages on‚ research has found that South Africans are eating too much sugar and carbs. 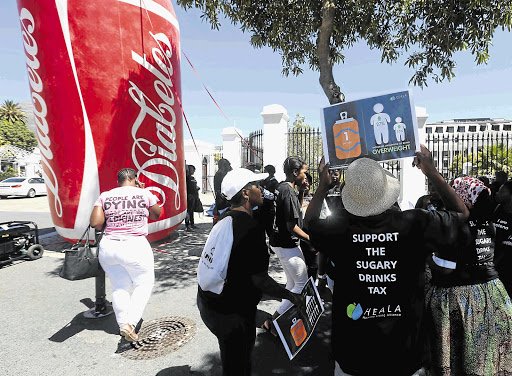 Protesters gather outside parliament in Cape Town where the first round of oral submissions was held yesterday as part of the hearings into a proposed 'sugar' tax on soft drinks, energy drinks and sweetened milk.
Image: ESA ALEXANDER

The study‚ funded by the Centre of Excellence in Food Security‚ also found that we are not consuming enough protein.

In a statement issued by the centre the study confirmed that we are eating too many refined foods.

"For example‚ many white bread [loaves] have had the nutrient-rich bran and germ removed from the grain‚ leaving the bread with very little nutritional value‚'' said Schönfeldt in a statement.

In addition‚ even in rural areas‚ diets are changing to energy rich but nutrient poor foods.

"In essence‚ the South African government needs to monitor and fast track these policies if they are to see their effectiveness. In the light of the aforementioned evidence‚ it is also clear that education regarding the importance of moderate total food energy and sugar-added beverage intake is mandatory‚'' the study recommended.

"Furthermore‚ the importance of fibre‚ good fats and sources of proteins as well as vitamin- and mineral-rich fruit and vegetables need to be advocated.”

In Parliament this week the proposed tax on sugar sweetened beverages came under the spotlight.

Professor Tolu Oni‚ from UCT's School of Public Health‚ told the joint meeting of Parliament's health and finance committees that statistics showed the global average of Coca-Cola products consumed per person per year was 89. In South Africa in 2010 the figure was 254.

She also said South Africa had the second highest consumption of sugar sweetened beverages in children between the ages of nine to 10.

South Africa is also the most obese nation in Sub-Saharan Africa with 70% of women and 40% of men overweight or obese‚ said Dr Sundeep Ruder from the Society of Endocrinology.

And the Department of Health's Dr Malcolm Freeman said South Africans' poor diets were a burden on the state which is struggling under the burden of high and rising rates of non-communicable diseases like diabetes‚ and heart disease.

BevSA‚ which represents drinks manufacturers like Coca Cola‚ Red Bull and Tiger Brands however said that the tax would cause serious problems for the industry.

BevSA's Mapule Ncanywa told the committees that together their industry created 300‚000 jobs and contributed billions in annual taxes. She said the tax could contribute to a 25% loss in jobs.

Thomas Funke of the SA Cane Growers' Association told Parliament that the tax would impact small scale farmers hard‚ especially given the current stress of the drought.