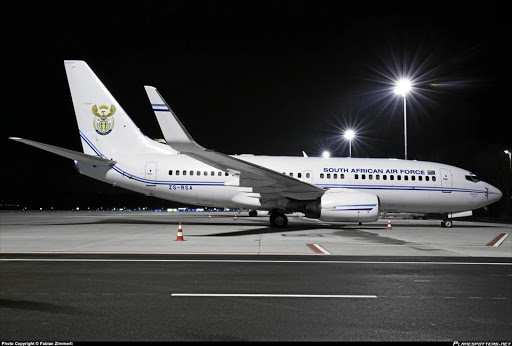 The on-again, off-again bid to buy President Jacob Zuma a new plane is back on, with discussions under way to purchase a R1.3-billion, 18-seater private jet, fitted with secure locks to keep 'foreign currency, weapons and classified documents'.

A 19-page document Buthelezi gave Msimang, which the Sunday Times has seen, shows that "it is essential one regional aircraft is acquired".

It is believed that the new jet will be used for shorter trips in Southern Africa, while Inkwazi, the president's main jet, which has reportedly been grounded several times because of mechanical issues, will be used for long-haul flights.

The proposed acquisition bid, code-named Project Moeketsi, further states that "the aircraft shall be required to carry up to 18 passengers excluding crew" and its "primary mission" would be to sustain "air support to the office of the president and deputy president".

Its requirements include "secure ... facilities for the safekeeping of valuables, foreign currency, weapons and classified documents of the passengers and security personnel".

An executive lounge to "accommodate a minimum eight passengers" and "fitted with reclinable business-class style seating" with "entertainment capabilities (audio and video)" is also listed among features that the jet should have.

A previous bid to acquire a presidential jet was abandoned in November after Armscor, the Department of Defence's acquisition agency, claimed that bidders had failed to meet tender requirements for the plane, which at the time was projected to cost R4-billion.

Armscor said in a statement then that "none of the bids achieved a full score satisfactory in the overall evaluation".

But the tender hasn't been re-advertised yet - and Armscor's website made no mention this week of a tender for a new presidential jet.

A source with full knowledge of the latest bid told the Sunday Times this week that the process to buy the jet had been kept secret this time round because a deal was being tailored for a specific supplier.

"This deal has been a subject of confidential discussions by top air force chiefs since the beginning of the year and, from what I can gather, it won't even go out for open tender because of the veil of secrecy surrounding it," the source said.

Defence Minister Nosiviwe Mapisa-Nqakula told parliament last year that her department still has "an obligation ... to buy an aircraft".

She said: "Our major responsibility is to ensure the safety of our principal."

Armscor CEO Kevin Wakeford referred queries about the jet to defence spokesman Siphiwe Dlamini, saying: "I am not in a position to respond."

Dlamini failed to respond to questions sent to him.