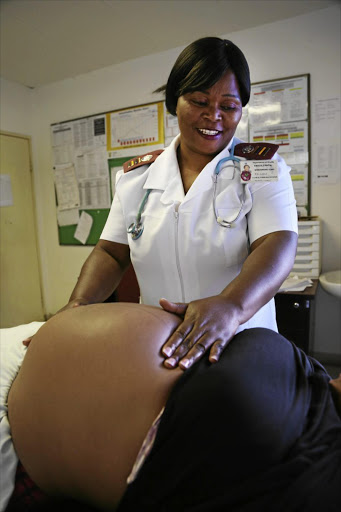 The sharp ear and quick thinking of a KwaZulu-Natal nurse resulted in surgery that saved the life of an unborn baby - and possibly his mother too.

Without any fancy electronic equipment, Primrose Goge, a nurse at Shakaskraal clinic on the North Coast, discovered an abnormal foetal heartbeat during the examination of 28-weeks pregnant Thandazile Ntethe in August last year.

Goge, who works in the mother and baby section of the clinic - a small building with narrow passages lined with mothers and babies - realised that Ntethe needed acute care and referred her to another facility a few kilometres away.

There, an ultrasound confirmed something was wrong and she was referred to Stanger Hospital.

Due to the complexity of the case, Ntethe was sent to Inkosi Albert Luthuli Hospital in Durban where specialists found there was a ventricular aneurysm - a defect in the heart ventricle.

Thanks to Goge's early detection, doctors were able to operate in time. They performed a ground-breaking surgical procedure in utero, pericardiocentesis, which involved using a needle and a tube to remove fluid from the sac around the baby's heart.

Ntethe gave birth to a healthy boy, Simangaliso, in October.

Late last year the provincial health department recognised Goge by handing her a certificate and promised her a bursary to help fulfil her lifelong dream of studying to become a doctor. Provincial health officials praised her, saying that nursing of this calibre could go a long way in dealing with high levels of maternal and infant mortality.

Tragically, in January the baby died after contracting pneumonia.

Goge, who treats about 100 toddlers a day and examines about 20 pregnant women, said she had been thrilled to hear about the operation.

"After the baby was born I met him and the mom. It was the first time I had detected something like this. I was so happy to have helped.

"But in January I cried when I received news of the baby's death while I was in town," said Goge, who has been nursing since 2001.

Contraception and dealing with teenage pregnancy will play a key role in the government's ambitious plan to drastically reduce maternal deaths in the next two years.

"To reach this target we need to strengthen access to contraceptives and family planning to ensure that all births are planned and wanted, as well as to decrease teen pregnancies," the department's Joe Maila told the Sunday Times.

Maila said that other measures being implemented included ensuring women got good antenatal care, that the number of mandated antenatal visits was increased from four to eight, and ensuring that "skilled staff was always available".

He said that hypertension, HIV and haemorrhage were the three main causes of maternal death.

"We have retrained large numbers of doctors and nurses on the essential steps in the management of obstetric haemorrhage," he said.

But challenges remain, among them the seemingly innocuous issue of transport infrastructure.

According to the "Struggle for Maternal Health" report by Amnesty International, women told the organisation that they "often travelled in unsafe and cramped conditions" to get to their health facilities and that roads were in poor - or even impassable - condition.

Costs of public transport, particularly in poor rural communities, were a factor.

A lack of ambulances was also cited.

"Without reliable, affordable and safe transport to health services, women and girls who need access to antenatal care and maternity units ... are placed at unnecessary risk. It is of great concern that the problem persists and threatens the health and lives of women and girls during pregnancy and labour," the report said.