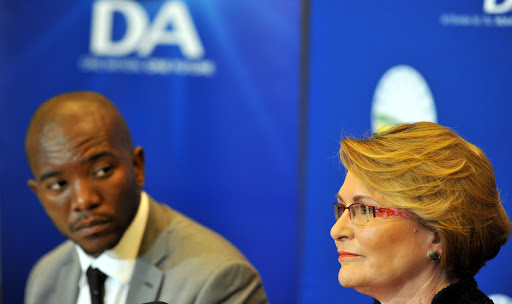 Party members close to Maimane told the Sunday Times this week that the former Zille protégé believes the storm sparked by her tweet 10 days ago, in which she praised aspects of colonialism, means she has to go.

"Sometimes, in a marriage, ostensibly an argument is about something trivial like leaving your clothes lying on the floor, but actually it is about the state and the future of the marriage," a senior source sympathetic to Maimane said.

"Helen must do the honourable thing."

A Maimane confidant confirmed that the DA leader wants Zille to resign as premier.

"Even Helen Zille's people in the Western Cape are gatvol [fed up]. But we'll see. She won't go without a fight ... there are similarities between HZ and Thatcher."

Zille and Maimane met behind closed doors on Thursday night in his parliamentary office, but could not reach a resolution . It is unclear if Maimane told Zille to step down .

Maimane's backers want Zille removed as the scandal could harm the DA's efforts to grow support among black voters. But removing Zille as premier could backfire as she still enjoys strong support from many whites, who form a solid chunk of DA voters.

Maimane and Zille yesterday refused to share details of their meeting. "I can't talk about this, I can't comment," said Zille. "Whether the federal legal commission is charging me or not, whether I met Mmusi or I did not, what was said, what happened or what did not happen, I can't comment on this, OK?"

Maimane said: "I cannot say anything about any meeting. It is important that the federal legal commission be left to do its job in a fair and balanced way. That is the difference between the DA and other parties. There will not be political interference."

There were at least four unsuccessful attempts this week to engineer a truce between Zille and Maimane.

Zille yesterday met Glynnis Breytenbach, chairwoman of the DA federal legal commission, who will make recommendations to the party's federal executive as to whether to push disciplinary charges.

According to another DA official, a party insider trusted by both Zille and Maimane tried in vain to broker a peace deal. The official also said the efforts of two business people, whom he declined to name, had failed.

Maimane has also been asked to remove Zille by the EFF, on whose support the DA depends to govern the hung metros of Tshwane and Johannesburg.

block_quotes_start Sometimes, in a marriage, ostensibly an argument is about something trivial like leaving your clothes lying on the floor, but actually it is about the state and the future of the marriage block_quotes_end

DA sources have confirmed that a meeting with the EFF has been scheduled for April 3 to discuss Zille's tweets.

EFF national spokesman Mbuyiseni Ndlozi yesterday declined to confirm or deny the meeting but said the party had officially raised "dissatisfaction" with the DA.

"We reiterated our view that Helen Zille should step down as Western Cape premier, and we have expressed our deep dissatisfaction to the DA. We have decided to give their internal processes a chance to run their course," said Ndlozi.

Sources said Zille had hardened her attitude and at times refused to meet other senior party members as she prepared to defend herself.

"She talks in absolutist terms about defending 'truth'. There will be no climb-down," said one Zille confidant.

"This is going to end very badly. You know how she is," said another.

"I just wish I could get both to go into a room, leave their egos outside and find a solution in the DA's and the country's interests," said a third.

Maimane sympathisers said that at stake was the future direction of the DA rather than the history of the country.

Within the DA power structures, Maimane seems to have the upper hand should there be a stand-off with Zille. So far he has majority support among DA fedex members, especially those from Gauteng, where the party has a lot to lose should its momentum among black voters be reversed.

Zille's main support seems concentrated in the two provinces with fewer black voters - the Western Cape and Northern Cape. She also has the backing of the chairwoman of the DA Women's Network, Denise Robinson.

Zille also has the support of some black leaders, including some who serve in the fedex, which will ultimately decide whether she is charged or not.

Patricia Kopane, the DA Free State leader, said although she condemned Zille's tweet, she did not believe she should be axed as premier. "I don't think it's a question of being recalled. The president [Jacob Zuma] has done worse."

Haniff Hoosen, a DA MP from KwaZulu-Natal and former member of the fedex, said Zille's colonialism tweets would not affect the party's growth among black voters.

The Western Cape legislature will have a snap debate on Tuesday about Zille's tweets, at the request of the ANC. During an emotional meeting of the legislature's DA caucus this week, most MPLs were sympathetic to Zille, showing her provincial base was holding, sources said.