Surprise! How No1 broke news to reshuffled staff 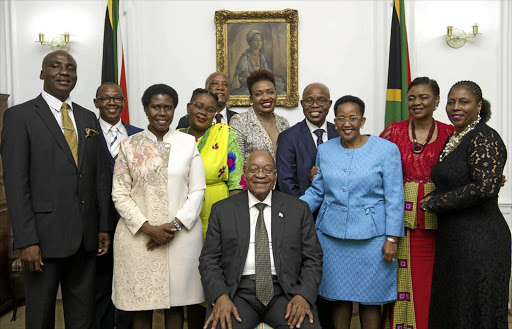 President Jacob Zuma with some of his new cabinet members after their swearing-in ceremony at Sefako Makgatho presidential guesthouse in Pretoria on Friday. They were appointed on Thursday.
Image: GCIS

The new finance minister, Malusi Gigaba, was in Cape Town for a fashion show on Thursday evening when his phone rang.

He answered. It was President Jacob Zuma on the other end with the news that he had been appointed minister of finance.

The appointment was made telephonically - a departure from the tradition of calling designated ministers into a room at Mahlamba Ndlopfu presidential guesthouse in the presence of ANC secretary-general Gwede Mantashe.

Gigaba, 47, was not expecting to be removed from the home affairs portfolio he had held since 2014 - even amid reshuffle rumours all week.

"When you are appointed in that fashion you don't ask why. You don't ask: 'Why me?'

It was not unusual for Gigaba to spend his evening at a gala dinner and fashion show. He is known for his fashionable dress sense and appreciation of expensive, tailored suits.

It was also not unusual for Fikile Mbalula to be at a party when he got the news that he was the new police minister.

The former sports minister is known to be the centre of the party due to his larger-than-life attitude.

Amid a flurry of speculation that he had been removed from his position in sports, he took to Twitter on Thursday evening to say he was still the minister of sports and was actually at a friend's party.

Later, after the call from Zuma, Mbalula changed his profile. He had previously served as the deputy police minister.

Newly appointed Deputy Minister of Telecommunications Stella Ndabeni-Abrahams got the call on Wednesday, a day before Zuma made the changes.

"I was watching television at home. I am super excited by the youthfulness brought into the cabinet because when we say young people are the future of this country we mean this," she told the Sunday Times.

Former tourism minister Derek Hanekom went on Twitter to change his profile to "former minister of tourism" shortly after the official announcement.

He did not receive a call from the president and learnt via social media and TV that he had been fired.

Pravin Gordhan - who Zuma fired following a questionable intelligence report - was relaxing at home in Pretoria when Zuma went live on TV after midnight on Thursday.

"Well, we saw on television last night [Thursday] that we are to lose our title," said Gordhan on Friday morning.

Another fired minister, Ngoako Ramatlhodi, didn't know for hours that he had been fired. The former minister of public service and administration switched off his phone on Thursday night, got into bed and had a good night's sleep. When he woke on Friday, his wife told him that she had seen on TV that he had been removed from office.

"I said: 'That's good ... I am relieved,'" he said. Then Ramatlhodi continued his day doing errands, initiating the process of packing up his belongings in the state house, out of which he would now be expected to move.

Former transport minister Dipuo Peters was in Cape Town, ready to launch the Easter road safety campaign in Somerset West - but was fired eight hours before the event. She asked her deputy, Sindisiwe Chikunga, to attend the launch.

The most perturbing appointment was making former minister and ANC MP Ben Martins a deputy minister of public enterprise.

He served in that role from November 2010 to June 2012. He was then made transport minister for a year and then minister of energy for a year. Martins took to Twitter after the announcement, expressing his genuine surprise.

"On being announced as a deputy min a friend said: 'It may be a blessing in disguise.' I replied: 'At the moment it seems effectively disguised,'" he tweeted.