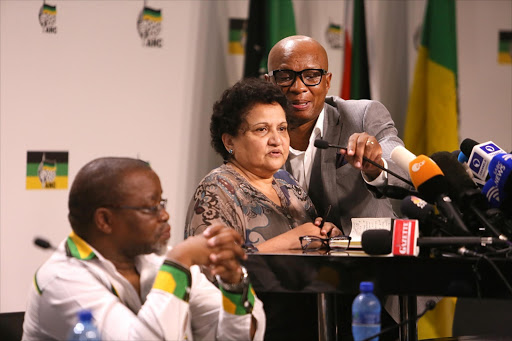 Jessie Duarte after the NWC at Luthuli House. With her are Gwede Mantashe, left and Zizi Kodwa.
Image: ALON SKUY

The sixth floor of the ANC's Luthuli House headquarters was the scene of a screaming match this week when Jessie Duarte tore a strip off secretary-general Gwede Mantashe following the booing of President Jacob Zuma at a Cosatu Workers' Day rally.

ANC insiders say Duarte, who is deputy secretary-general, confronted Mantashe and shouted at him in the corridors in the presence of Luthuli House staff.

A staff member said an irate Duarte accused Mantashe of sending Zuma "out to the wolves" by deploying him to the rally despite several unions having asked that the president should not attend.

"It happened on Tuesday morning. Everyone was really shocked. I think Jessie is blaming Gwede for [the booing]," the source said.

The insider said Mantashe responded by saying the decision to deploy leaders was taken by the top six officials.

Duarte was booed at another rally, in Limpopo, on the same day as Zuma was booed in Bloemfontein.

Mantashe did not deny the incident but declined to discuss the matter in detail.

Asked if Duarte was angry during the interaction, Mantashe said: "I would have been upset too. If I went to Limpopo and that happened," he said.

In a video that went viral on social media this week, Mantashe refuses to respond to questions about Zuma's booing. Instead he talks about the warm welcome he received.

"In the event in Johannesburg, where I was, we spoke, all of us. It was a good May Day. The turnout was good and the reception was good and the crowd was warm," Mantashe says in the recorded footage.

There have been heightened tensions among the ANC's top six, with the relationship worsening since Zuma's firing of former finance minister Pravin Gordhan and his deputy Mcebisi Jonas, along with four other cabinet ministers.

Mantashe, the ANC treasurer-general Zweli Mkhize, and Deputy President Cyril Ramaphosa came out publicly to say Zuma had not consulted them about the reshuffle.

Duarte has been at Zuma's side all along, defending him and lobbying for him.