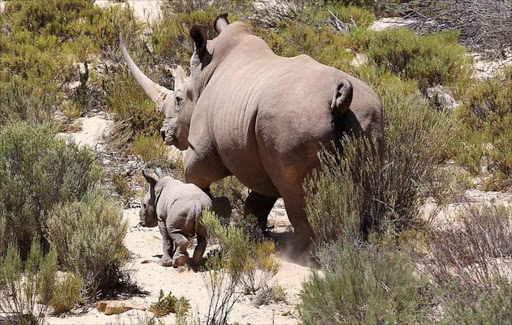 It was a rhino bloodbath, as poachers wiped out at least nine rhino in a full-moon massacre at KwaZulu-Natal's flagship game reserve in less than 48 hours this week.

The latest killings in the Hluhluwe/Imfolozi park have pushed the death toll in the provinceto at least 89 in the first 18 weeks of this year — shocking figures that suggest the province is heading for the bloodiest year on record as killer gangs switch their focus southwards from Kruger National Park.

It is believed the rhinos were shot and dehorned in less than 48 hours, coinciding with the full moon on Wednesday and Thursday.

Two suspected poachers — believed to be from the Hazyview area in Mpumalanga — were arrested, and a .375 hunting rifle seized.

Hluhluwe/Imfolozi is known as the park that rescued the southern white rhino from extinction. One former ranger lamented: "It is not going to be very long now. At this rate, rhinos will be all but wiped out in Hluhluwe-Imfolozi in three years; and the few survivors will have to be guarded 24 hours a day."

Well over 6,000 rhinos have been slaughtered nationwide during the intense poaching wave that escalated dramatically in 2008.