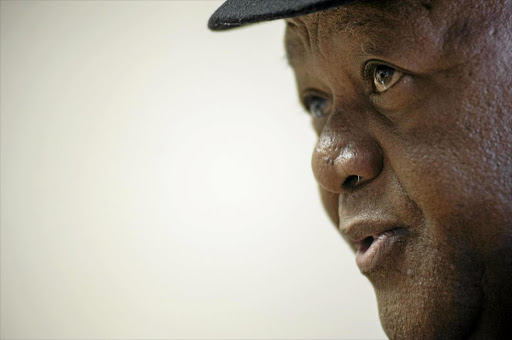 Minister in the Presidency Jeff Radebe is embroiled in a text sex scandal that threatens to torpedo his ambitions for higher office.

Radebe, the country's longest-serving cabinet minister, is in hot water for raunchy text and e-mail communication in which he asks for nude pictures of a 29-year-old Union Buildings staffer, Siyasanga Mbambani.

In one explicit SMS, the 64-year-old minister writes: "C.l.i.t is requested" in what is believed to be a reference to her clitoris.

Mbambani, a presidential photographer, is currently on suspension on charges related to insubordination.

She blew the whistle on the minister and his sexting to bolster her claim she was being victimised by her bosses at the government communications agency GCIS, for being "improperly close" to politicians at the Union Buildings when, in fact, they were the ones "chasing after" her.

In the past two weeks Radebe, through his public relations people, set up a number of meetings to engage with the Sunday Times.

Three meetings were held, but there was no official response to the allegations, despite promises.

In the end, there was no response by the time of going to print yesterday, even after another meeting.

Although the ANC race to replace President Jacob Zuma as party leader in December is mainly between Deputy President Cyril Ramaphosa and former African Union Commission head Nkosazana Dlamini-Zuma, Radebe is one of the ANC leaders who has been quietly lobbying the branches to back them.

Radebe and Mbambani began communicating via text messages and e-mails in 2014 after exchanging telephone numbers.

The flirting started when she sent the minister pictures of himself at a government function.

It was then that they exchanged cellphone numbers so that the minister could "thank you in person" for the pictures.

On March 5 last year, the minister sent her a text message saying "take one down!". This appears to have been a request for a photo of her private parts.

They then playfully string each other along for some time before she eventually sends him pictures of herself fully clothed.

"That one I requested," the minister responds in an SMS.

"Izoyibona [Come and see it]," she replied.

And then the minister writes: "C.l.i.t is requested."

After some more pleading from Radebe, she refers to him by his first name: "Thamsanqa khoyeke man [Thamsanqa, leave it] ... You making me shy now."

She ultimately sent him pictures of herself in a bubble bath and another one of her naked breasts.

"The dress is inviting," said Radebe.

She then asked what he was up to and he said she should suggest what to do. She replied: "Won't mind chilling with some nice sparkling French wine."

The exchanges emerged after Mbambani had approached the Sunday Times to speak out, claiming she had been sexually harassed by the minister over a period and that she had also been put on suspension at GCIS because of allegations of improper conduct on her part, and over how she dressed around politicians.

But the communications seen by the Sunday Times between the two suggest that there was no acrimonious relationship. Mbambani appears to be encouraging the sexual nature of the communication.

She initially denied ever sending any nude photos to the m inister and claimed she never entertained his sexual advances.

"I have never sent him pictures of my private parts," said Mbambani.

But when confronted with the evidence that she had, she said: "I might have been drunk and got tired of him asking for my pictures so I just sent them."

She didn't respond to further questions about her initial claims of being sexually harassed.

Mbambani was put on suspension by her immediate boss at GCIS, Elmond Jiyane, following various allegations of misconduct and insubordination.

Mbambani was suspended in March over her alleged skimpy dressing and seductive conduct in front of Zuma and Ramaphosa.

It was reported that Jiyane had accused her of making sexual advances towards Zuma and Ramaphosa and flashing her buttocks and breasts at them while taking pictures at official events.

Mbambani has countered the claims and lodged a complaint that Jiyane had instead been harassing and bullying her, including unfairly removing her as a presidential photographer.