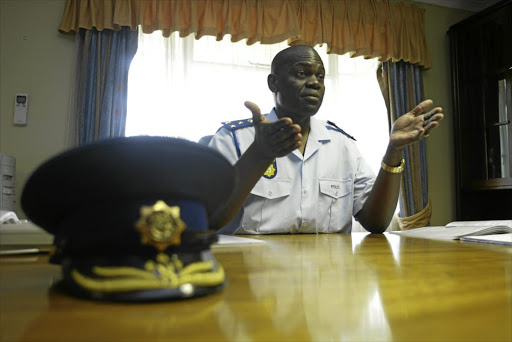 The same weekend, the province's only helicopter had to be flown 30km from Colesberg to Gariep Dam and back to collect a jacket Shivuri forgot at the dam.

The police did not deny Shivuri's alleged antics on Friday when contacted by the Sunday Times for comment. Instead, they said the chopper was used for "crime-prevention operations".

The DA has requested that the Independent Police Investigative Directorate investigate the alleged abuse of the helicopter by Shivuri during last week's ANC provincial congress in the small town.

The DA's Melinda Hattingh claims Shivuri's flight to retrieve his jacket cost the taxpayer about R6,000.

The 4km flight to his breakfast destination cost another R1,500.

Hattingh said Northern Cape police had only one helicopter and one plane, meant for chasing car thieves, tracking criminals and even hunting rhino poachers. "Now the commissioner is using the chopper for his own personal benefit," she said.

"We have further written to the chairperson of the legislature portfolio committee on safety, Gladys Oliphant, requesting her to urgently summon Shivuri to appear before the committee to answer questions on his conduct in Colesberg," said Hattingh.

"SAPS members were deployed in and around Colesberg in order to prevent, combat and investigate crime, to maintain public order, to protect and secure the inhabitants and their property," he said.

"The chopper is used in crime-prevention operations and, in this case, it was not different as commissioner Shivuri was assigned to it in order to reach different places on time and it also gave an advantage to patrolling the area at large."