Duduzane Zuma's papgeld woes, Gupta lawyers and the other women 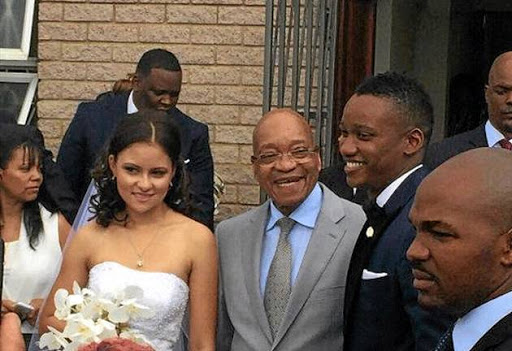 A clearly delighted President Jacob Zuma after becoming father-in-law to Shanice Stork, with Duduzane next to him.
Image: SUPPLIED

Duduzane Zuma became a father two weeks after he tied the knot in a spectacular wedding at Zimbali.

The festivities at the luxurious resort in Ballito, on the KwaZulu-Natal North Coast, boasted a full glass marquee and, of course, a Daddy President among the guests.

However, the mother of the baby boy, born soon after the festivities, was not Shanice Stork, his comely bride, but a former lover.

The striking young woman with long black hair may not be named to protect the child.

When the mother demanded maintenance from the president's playboy son, to whom did he turn to negotiate the details? Daddy President? No ways. He went to the Guptas, the family entwined in so many other aspects of Duduzane's life.

This week the woman's Facebook profile picture showed her with her son facing away from the camera. The picture is captioned: "Proud mommy to the cutest kid in the world."

She also e-mailed Duduzane pictures of their son soon after the boy's birth.

After months of negotiations between the former lover and Duduzane via maintenance lawyers, Gupta employee and legal adviser Pieter van der Merwe was roped in on the final maintenance agreement.

He advised that Duduzane pay the mother of his child a lump sum of R3.5-million into a trust account for his son to avoid being "screwed".

This communication was contained in leaked e-mails which showed that, after receiving Van der Merwe's advice, Duduzane sent the maintenance agreement to Tony Gupta.

Van der Merwe, who worked for VR Laser, a Gupta company, confirmed that he had given Duduzane legal advice.

Some of his advice in March last year included: "I know you may not want to bind her too much, but what will happen - if they want to screw you - is that she will 'invest' the money in a fund/project, with a friend, who will steal/launder the money, so that there is no 'fault' on her side, and then one cannot say that we want the money back.

"If it is in a trust, she can use it, but at least it is protected. She also has the sweetener that, if there is money left after he is self-sufficient, that money can revert to her."

The e-mails also show that although Duduzane was in a hurry to pay a settlement amount, his maintenance lawyer advised caution, warning the president's son not "to go in blindly".

Duduzane's lawyer also dismissed some of the woman's demands as "excessive and unreasonable requests", such as an iPad for the child.

She also attached the fees of three prestigious Johannesburg private schools - including King David School in Sandton and a Crawford College - for Duduzane to pay as part of the boy's monthly allowance.

After months of back and forth between the lawyers, the woman sent Duduzane messages complaining that she had "no money for our son's nappies or formula" and added "luckily I'm breastfeeding for now", the e-mails revealed.

On October 8 2015, Duduzane wrote to his lawyer: "I have the sheriff of the court at my gate with a maintenance subpoena set for the 23rd of October 2015. Should I accept or should I divert him to come to you?"

Duduzane appeared in court and that is when a settlement was drafted where a one-off lump-sum payment would be made which his former lover could invest to look after the child.

The agreement, which is confidential, included a suggestion by Van der Merwe that Duduzane have access to the child, now two years old, at reasonable times.

Duduzane did not respond to questions sent to him by the Sunday Times.

The Gupta e-mail leaks reveal the extent to which Duduzane was not merely a business partner of the Guptas but very close to the family.

At the end of 2015 Duduzane bought an apartment worth nearly R18-million in the Burj Khalifa skyscraper in Dubai, the largest city in the United Arab Emirates.

Leaked e-mails show that he bought the property with substantial help from the Guptas and their associates.

The transaction came only months before a letter was circulated in which the Zumas appeared to be seeking residency in the UAE.

The Burj Khalifa is the tallest building in the world at 828.8m.

This week the Sunday Times also revealed how plans for Duduzane's wedding were handled at the top, with the Guptas appointing Ronica Ragavan - who is now the acting CEO of Oakbay - as the "technical point of contact with suppliers and service providers".

Gupta attorneys were roped in to deal with contracts and payments while Ragavan drew up plans for the fancy function, "venue liaison and marquee dimensions and drawings, etc".

Documents show that the Gupta family companies paid more than R500,000 for a stage and lighting for the event. This included a 3m floating stage in the huge swimming pool at Zimbali.

A special stage needed to be erected with an aisle on the water for the bridal party to walk along with a canopy draped in flowers in the middle.

The wedding organisers were billed about R700,000 for renting a full glass marquee for the event.

E-mails show that the Fairmont Zimbali resort charged about R3,000 a person for guests to stay overnight.

Such was the Gupta involvement in wedding preparations that Sahara CEO Ashu Chawla and Ragavan dealt with options for wedding gifts.

At the time of his wedding, erroneous media reports said that Duduzane was marrying Keshwar, who was quick to put to bed those rumours.

The leaked e-mails also show how three women sent him a number provocative pictures of themselves with the captions "Remember what you missing" and "That makes you flight (sic) to Paris".

Duduzane is known to have a roving eye.