After Zuma’s damage to the brand, nothing can save the ANC from electoral defeat, says EFF leader 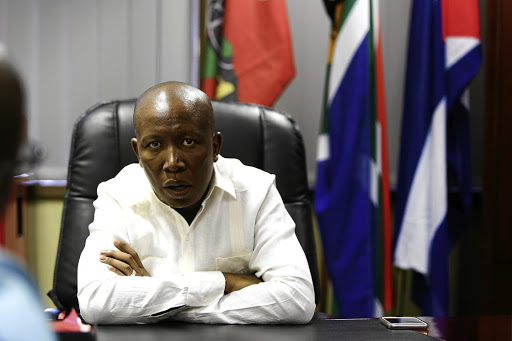 If President Jacob Zuma holds the title as South Africa's ultimate political survivor, the first runner-up has to be Sello Julius Malema.

Barely five years ago his political career seemed to be up in smoke - thanks to his expulsion from the ruling party and from its youth league, of which he was once the powerful president.

His businesses had gone under, too, with his three taxi cabs taken off the road by authorities, and his cabbage and tomato farm confiscated by the state amid claims that it was obtained from the proceeds of corruption.

The Seshego-raised self-styled spokesman of the poor had also seen the taxman attach his multimillion-rand mansion in Sandown, a Sandton suburb that is the epicentre of what he and others call white monopoly capital.

Julius Malema has a soft spot for Pastor Mmusi Maimane but little respect for politician Mmusi Maimane.
News
5 years ago

Gone too was his palatial house in Flora Park, a Polokwane suburb not far from a neighbourhood locals call Tender Park due to its popularity with those who have made millions doing business with the provincial government.

Yet today, he runs the third-biggest political party in the country and has had a great say in who gets to form municipal governments in the Johannesburg, Tshwane and Nelson Mandela Bay metros.

With only two years to go to the next election, he is talking big - claiming, in typical Malema fashion, that his party can grow from its 6% share of the vote to over 50% by 2019.

We are in his third-floor office at the EFF headquarters in Braamfontein, downtown Johannesburg, when I ask him about his party's targets for the next election.

These are winning the national election outright and kicking the ANC out of power in Gauteng, North West and Limpopo, he insists.

I ask him again, hoping that he'll set a more realistic target this time round.

Surely he can't be seriously thinking he'll be Zuma's successor ... Can he?

But who can blame him? After all, it was Zuma himself - when the two were political bedfellows - who told the nation that Malema would one day be the country's No1 citizen.

Cyril is a good ANC
poster boy to attract business. But he won’t appeal to the masses

Besides, as Malema reminds me, most of us didn't give him much of a chance when he launched his new political party on July 26 2013.

Sunday, as the party prepares to celebrate its fourth anniversary, it has 25 MPs in the National Assembly, it is represented in all nine provincial legislatures and has more than 800 councillors occupying seats in municipal councils.

"Who thought 6% was achievable for an EFF that was without a cent? Imagine now - the EFF is in parliament and has all kinds of exposure with the campaigns we have run," Malema explains.

"Now everybody knows the EFF. Now everybody appreciates the existence of the EFF. Even the white minority - which people think we hate - is beginning to say: 'Look man, we think that these people have got something to offer.'

"They are beginning to say: 'Maybe they must be given a chance. We don't agree with what they are saying, but it's a necessary discourse to take place in a country like South Africa, given our past.' So people are beginning to appreciate that this EFF means business."

But for Malema and the EFF to succeed, the ANC must die.

The governing party is headed for an elective conference in December whose outcome, many commentators believe, will define it, whether it remains in power or occupies the opposition benches after the 2019 elections.

Malema, however, is convinced that neither of the two main candidates in the ANC leadership race - Deputy President Cyril Ramaphosa and former AU Commission chairwoman Nkosazana Dlamini-Zuma - can save the ANC from an electoral defeat.

The Zuma presidency, he opines, has done too much damage to the ANC brand.

"Cyril won't bring anything back. Nkosazana is worse.

"I met some ordinary African fellow at the airport who stopped me and said: 'Though I'm not from this country, my brother, we appreciate your work. I'm praying for one thing.' Then I asked: 'What are you praying for?' He said: 'I pray for the ANC to make the mistake of electing Zuma's wife. Then it's going to be obvious for you, my brother.'

"They are convinced the ANC's election of that woman is going to be something else..."

But surely he sees Ramaphosa as a threat?

"Cyril is going to be a very good poster boy for the ANC in order to attract business and all that. But he won't be an appealing fellow when it comes to the masses on the ground."

Malema's optimism about his party's prospects is dampened only by his frustration that, no matter what he does, the EFF is just not succeeding in having a meaningful presence in the coastal provinces of KwaZulu-Natal, the Eastern Cape and the Western Cape.

"KZN is a difficult province for the EFF. We don't seem to be performing well in KZN, Eastern Cape and the Western Cape. We have since taken a decision that we must do more work there."

Next weekend, the EFF will hold a rally in Durban to celebrate its fourth birthday, as part of its efforts to make inroads in Zuma's heartland.

Without a strong presence in the three provinces - especially KwaZulu-Natal, which has the second-highest number of registered voters after Gauteng - the EFF's influence is unlikely to grow greatly.

However, even as he builds his party, Malema is keeping a close eye on another likely scenario that may result from the coming ANC conference: a breakup of the ruling party or its tripartite alliance.

There is widespread speculation that those who back Ramaphosa are considering splitting from the ANC if Zuma gets his way and the Dlamini-Zuma slate wins the party elections in December.

If Ramaphosa - the man who, in his capacity as chair of the ANC's disciplinary committee of appeals, expelled Malema from the party - were to form a splinter party, would Malema work with him?

Sometimes you use your enemies to achieve what you want, and we’re doing exactly that.

"We'll see at that time ... If he is genuinely sorry about Marikana, like he says he is ... I am saying he must meet the widows, Amcu [the Association of Mineworkers and Construction Union] and those workers who survived his bullets. He must then go to the [koppie] after getting permission from workers ... There he must perform rituals and ask for forgiveness from the troubled spirits," Malema says.

Ramaphosa, who was a Lonmin board member when the mine's workers went on strike in 2012, has said he'd like Winnie Madikizela-Mandela to take him to Marikana for a reconciliation meeting.

But even if he did all of that, Malema is clearly suspicious of the deputy president and his new-found voice against state capture, Zuma, and his friends the Guptas.

"Cyril talks about a commission of inquiry because he knows it will not come after Zuma's term. If he is genuine about fighting corruption, why is Cyril not opening criminal cases against all those things that are happening?"

Work with the communists?

What about the SACP? Its leaders have been threatening to leave the ANC of late; would he work with the communists?

What about his leader, Blade Nzimande?

"Useless. Blade is not genuine ... Blade says all the things he says and still sits in the cabinet saying: 'No, we want to fight from within.' Fight what?"

There is, however, a possibility that after all the infighting, the ANC and its allies may return from the December conference singing from the same hymn book.

In which case the EFF's option would be to continue the loose alliance it has formed with other opposition parties over the past few years, to take on Zuma and the ANC.

EFF blocks return of the defectors

While other smaller parties are struggling to attract members, the EFF is turning them away.
News
5 years ago

Working with the DA, the IFP and the United Democratic Movement has been "a turning point for South Africa". The EFF's decision to help the DA take over the Tshwane, Johannesburg and Nelson Mandela Bay metros was the catalyst for the anti-Zuma revolt that is playing itself out in the ANC, Malema claims.

"If the EFF had not taken the metros from the ANC, the ANC would have said: 'The ANC lives, the ANC leads.' And it was going to be business as usual ... Zuma was going to anoint the next leader in December. So the removing of the ANC from municipalities, our Constitutional Court victories and all that made the ANC smell the coffee ... Now they are beginning to challenge him directly."

But is it not ironic that he left the ANC claiming that its adoption of "neoliberal policies" such as the National Development Plan meant that it "was no different from the DA", and now he finds himself working with the very DA he despised?

"Sometimes you use your enemies to achieve what you want to achieve, and we're doing exactly that."

If both his strategy and tactics are as on point as they have been over the past four years, maybe in four years we will be debating who was the ultimate political survivor - him or Zuma.