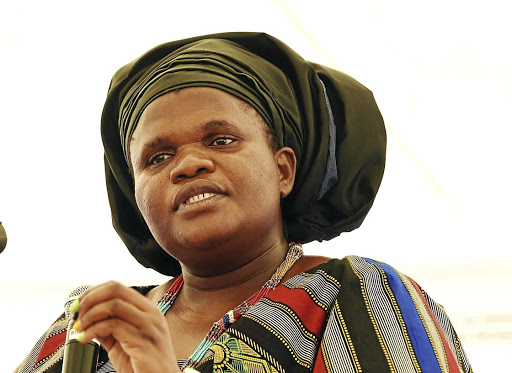 Disgraced minister Faith Muthambi treated family and friends to a luxury junket at huge expense to the taxpayer just two months after being moved to a new ministry.

Muthambi flew 30 members of her family and friends to Cape Town for her budget speech in parliament in May.

The minister was shunted to the public service and administration portfolio in March after President Jacob Zuma could no longer ignore the public outrage at her dismal management of the communications ministry.

Just four months into her new job, Zuma's trusted ally is in the spotlight again. Details emerged this week that Muthambi:

• Flew several family members, including her mother, aunt, sister and son, to Cape Town for her budget vote speech in parliament in May. Also in the entourage was disgraced former SABC board chairwoman Ellen Tshabalala;

• Hired a Limpopo police constable as her personal assistant.

Me and the minister are comrades and very close, but my daughter is a South African and can work anywhere she wants,

In May the Sunday Times revealed that Muthambi had shared highly confidential information about cabinet meetings with the Gupta family.

This week the Sunday Times established that Muthambi's Cape Town jaunt for her friends and family cost the public almost R300,000.

An official departmental document seen by the Sunday Times reveals the party totalled 30 people, including two uncles and friends who were flown to Cape Town from various provinces.

'I don't really know who paid'

"People, especially the minister's relatives and friends, were shuttled from Limpopo to OR Tambo International Airport at taxpayers' expense. And they all spent two nights in Cape Town courtesy of South African taxpayers," a source said.

One of her guests, Chief Evans Madonsi, at first said he was not sure who paid for his trip to Cape Town - but when pressed said he had paid for himself, and stayed at a "family base" while there.

Wilberforce Muthambi, another uncle, said: "I don't want to talk."

Former SABC chairwoman Tshabalala, who was outspoken in her support of Muthambi while she was running a ministry beset with calamities, said yesterday that she was rushing to a meeting and could not talk.

Muthambi's friend Mihloti Chauke said she did not know who paid for her trip.

"Yes, I went to Cape Town. I don't really know who paid. I don't know the name of the place where we stayed."

When she was asked what her relationship with the minister was, the call was cut off and Chauke did not answer when called again.

Muthambi responded: "With regard to the budget vote guests, I was requested by the department to provide the required lists as common cause and practice within the allocated budget."

However, two ministers - who did not wish to be named - confirmed that ministers were allowed guests at their budget speech vote - but only if the guests bore some relevance to their budget.

• 4 months into her job Muthambi is at it again

One of the ministers commented: "Because of those austerity measures which were introduced by Pravin [Gordhan] we had to cut down on many things and limit the number of people. But so many family members? That is shocking."

Two months into her tenure, Muthambi stripped her director-general Mashwahle Diphofa of any powers to appoint staff members.

Muthambi employed Motsoeneng's daughter straight from university for over R200,000 a year without following prescribed processes.

Muthambi recruited Lerato Motsoeneng to work as an administration assistant in May this year without holding an interview or advertising the post.

"Lerato was just called and informed that she must report to work at the department without applying for any post there," a source close to Muthambi said.

This was despite the fact that as the minister of public service and administration it is Muthambi's job to monitor the correct procedures governing the hiring of all government employees.

Motsoeneng confirmed on Friday that his daughter was working in Muthambi's office.

"At least that one went to school. She is well-educated and certificated, but I don't want to comment about my daughter's job. I can only confirm that it is true that she is working there."

Motsoeneng got the top position at the national broadcaster without a matric amid widespread rumours of Muthambi's influence in his appointment.

Motsoeneng claimed "malicious people" were spreading rumours that he had influenced Muthambi to give his daughter the job.

"Me and the minister are comrades and very close, but my daughter is a South African and can work anywhere she wants," he said.

Muthambi employed police constable Mashudu Tshisikule - who has no tertiary education -as a personal assistant, also without following procedure. As a constable Tshisikule earned about R150,000 a year, and now stands to pocket a salary of R1.1-million.

Tshisikule, who was stationed at the Thohoyandou police station in Limpopo, began posting photos of himself and Muthambi on his Facebook page long before he joined the department in June this year.

Muthambi said Tshisikule was a comrade she had known for years.

"[He] had been a fellow branch comrade since youth league days and my constituency office co-ordinator since my election as a member of parliament in 2009, hence he qualifies to be my personal assistant," she said.

"I don't want to talk about my relationship with minister Muthambi," Tshisikule said.

One of the cabinet ministers said Muthambi was a hypocrite.

"She has been scrutinising all applications for jobs in our departments and frustrating our recruitment process, but she can just employ people without following the same procedures she wants us to follow.

"She is a shameless hypocrite."

Muthambi sidelines DG who cut off the cash

Faith Muthambi has stripped her director-general, Mashwahle Diphofa, of his powers, apparently for refusing to fund her imbizos. The minister of ...
News
4 years ago

A major ruling — but it may not end dispute

The victory this week in the Constitutional Court by former communications minister Faith Muthambi over e.tv may not mark the end of the long-running ...
Business Times
4 years ago