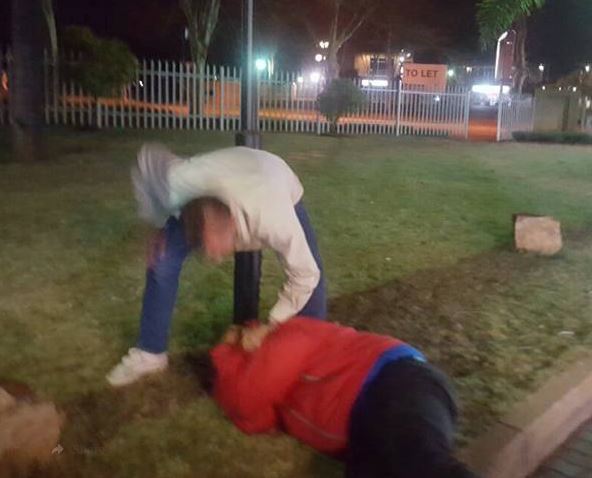 One of the six men is seen assaulting a man outside a KFC in Montana, north of Pretoria.
Image: Facebook

Three of the four men arrested for a racial attack on a black couple at a KFC outlet in Pretoria this week have various other assault charges pending against them.

It has also emerged that they gave police false addresses, which resulted in them being denied bail on Friday when they appeared in court.

They are believed to be among six men who attacked Jacob Sono and his wife, Dudu, after Jacob asked the men to move forward in a drive-through queue at a KFC in the suburb of Montana.

Let's report them to the authorities! 😡😡

Two of the men fled the scene and are yet to be arrested.

In a video that has gone viral, two of the men are seen beating Jacob, who is lying on the ground unable to defend himself.

One of the men is heard saying, "Skiet hom [Shoot him]."

Dudu, who filmed the vicious attack, sounds distressed and approaches the men asking if they would hit her even though she is a woman.

The fast-food chain restaurant has condemned the incident.

KFC corporate communications manager Gail Sham said the company had been in contact with a member of the Sono family and extended its apologies and support.

"The violence in the footage is inexcusable and we condemn any form of violence in our nation," she said.

Police spokesman Kay Makhubela said only Harding had been released on bail.

"The three other suspects were denied bail after they were found to have pending assault charges and gave false addresses.

"The suspects will appear again in the Pretoria Magistrate's Court on Friday."

South Africa has been rocked by yet another suspected racial attack‚ this time on a couple waiting in line at a fast food chain in Pretoria.
News
4 years ago