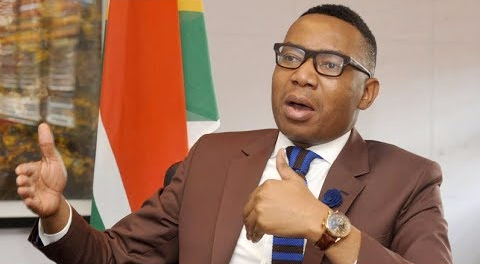 Deputy Higher Education Minister Mduduzi Manana also has a public protector complaint against him from his former head of office, lodged in 2012.

Mduduzi Manana is a boss from hell who has been accused by his staff of temper tantrums, blackmail and blatant abuse.

The disgraced deputy minister of higher education, who slapped, punched and kicked two women at a Johannesburg nightclub last Sunday, has been accused of throwing diaries and cellphones at his staff; ordering employees to cook for him and his friends at his house; and punishing one employee by leaving her to sit in the dark, alone, on a winter's night.

Manana also has a public protector complaint against him from his former head of office, Wonga Tabata, lodged in 2012.

Mandisa Duma, one of his victims in this week's attack, said she was having trouble sleeping at night.

"He hit me as if he was hitting a man. He does not deserve to be in any leadership position. He behaved in that way because he is in a position of power and he thinks his job gave him the power to assault me."

Duma sustained bruises, including to her right eye, neck, head and legs during the attack.

The second victim, Tina Mapita, said she would go for a CT scan this week after suffering severe headaches. Manana slapped her, pulled her by the hair and threw her to the floor.

Unidentified men held one of the women down while Manana attacked her.

The deputy minister has admitted to the assault at Cubana in Fourways early on Sunday morning. He claimed he was provoked because his victim called him gay. On Monday he apologised, saying: "Regardless of the extreme provocation, I should have exercised restraint. That shameful incident should not have happened." 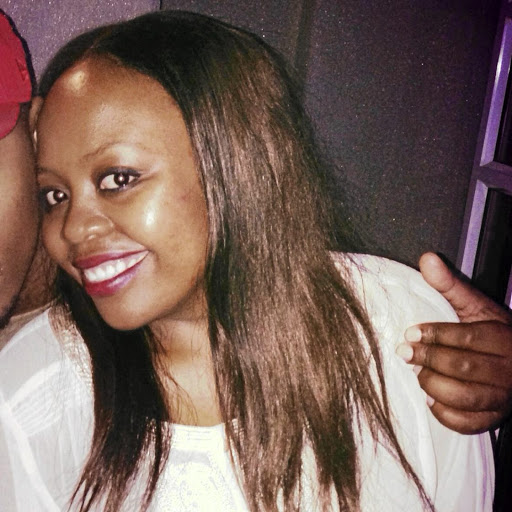 Mandisa Duma, a victim in the Cubana attack, is having trouble sleeping at night since the incident.
Image: Supplied

But former employees in the flamboyant deputy minister's office describe a long history of aggression and gross abuse of his staff. The temper tantrums, blackmail and blatant abuse stretch back at least five years.

One former secretary told the Sunday Times that her boss showed his nasty side from day one, in 2015. "The very first day one started, a form of abuse was displayed," she said.

She said Manana would call her at 2am, swearing and threatening to fire her. When in a rage he would also throw his cellphone and diary at her. "He made me fly with my own money from Cape Town to Johannesburg and back to fetch a mobile printer."

Once, as punishment for a botched booking, he left the secretary to sit outside Manana's flat in winter in Cape Town from midnight to 2am.

She claimed employees were made to clean his home and entertain his friends when he hosted parties at the weekend.

The former secretary said he once made the entire team work right through the night until 6am just to prove who was in charge.

"There was no deadline," she said.

He verbally abused his staff, calling them iinkunkuma azichole estratweni - rubbish he picked up from the street.

The secretary claimed when a colleague had a miscarriage Manana said he would not sympathise with her as she was "not loyal".

"The man did not respect anyone as a human being. He took us as things that were there to do what he wanted. He does not follow any policies and runs the office as if it's a farm."

He hit me as if he
was hitting a man. He thinks his job gave him the power to assault me

Another former employee told similar tales of abuse, and said Manana repeatedly threatened to sack her.

She said he would also draft and send derogatory SMSes to his staff.

Bodyguards said Manana had fired more than five bodyguards in just over a year and partied until the early hours of the morning, compromising their ability to function.

In Tabata's 2012 complaint to the public protector, he accuses Manana of abusing his power.

The career civil servant's complaint centres on a phone call on the evening of July 16, a month after Manana had been appointed, in which Manana bizarrely accused his then head of office of "being part of a political grouping that did not want him to succeed as deputy minister". 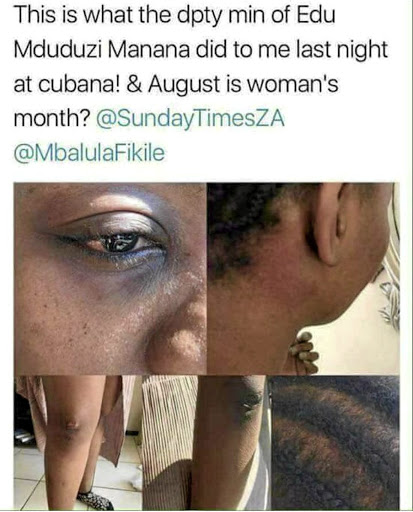 The tweet sent by Mandisa Duma after she was assaulted by Mduduzi Manana at Cubana nightclub.
Image: Twitter

More embarrassment followed the next day when, in front of his staff and with his protectors in the next room, Manana launched into a screaming tirade, repeating accusations of "dirty political games" against Tabata and threatening to have him investigated by then state security minister Siyabonga Cwele.

Tabata, at the time a chief director on secondment to Manana's office, described the attacks as "humiliating" and a "violation [of his] human dignity". After the second encounter the 55-year-old requested the secondment be terminated.

The public protector's office was yesterday unable to give an update on the case outside office hours, but the Sunday Times understands that investigators wanted to close the matter in 2013 after Manana denied the accusations, and two junior officials in his office refused to co-operate with the probe. Tabata declined to comment, saying the issue was for the department to handle.

Manana yesterday did not respond to questions sent to him.

Yesterday morning Duma and her friend Mapita met up for an informal counselling session. Mapita recalled: "The assault happened so quickly. I was trying to stop Manana as he was attacking Mandisa and he then turned on me. No decent man will ever hit women like that."

The Presidency yesterday said President Jacob Zuma was "considering the matter and implications thereof for government and the office he holds".