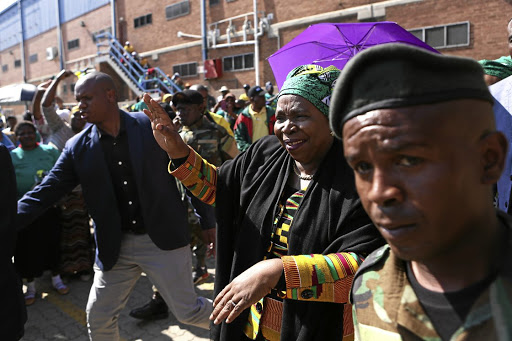 Supporters of Nkosazana Dlamini-Zuma are discussing the swift removal of President Jacob Zuma from the Union Buildings should she be elected ANC president - to improve the party's chances in the 2019 election.

Insiders said informal discussions about Zuma's early exit had been held within Dlamini-Zuma's camp as there was a realisation that it would be difficult for the party to win a general election with Zuma as head of state.

This is part of a broader strategy among her backers to disassociate Dlamini-Zuma from her former husband in order to win over those who are disillusioned with him.

It is also an attempt to undercut the campaign of Deputy President Cyril Ramaphosa, whose backers have made it clear that Zuma would be recalled soon after this December's party elections, should his deputy win.

'Not my job to shield ANC,' Mbete said to have told party caucus

National Assembly Speaker Baleka Mbete this week defended her decision to allow a secret ballot in the vote of no confidence against President Jacob ...
News
3 years ago

Insiders close to the premier league, a lobby group campaigning for Dlamini-Zuma, said the possibility of removing Zuma in an "amicable way" was on the cards if their faction won.

"There is that talk but we have to be careful. We have to manage this carefully. Look, we can't lose the election. We will do everything to win elections but that man still has a lot of power ... so we have to be cautious," said a Dlamini-Zuma lobbyist.

This week, North West premier and ANC provincial chairman Supra Mahumapelo hinted at such talks at a cadres' assembly in Klerksdorp - in the presence of Dlamini- Zuma.

"Stop insisting that President Jacob Zuma must step down. He is left with three months. Ninety-something days. Let him finish his term and bid him farewell," Mahumapelo said.

Mahumapelo's allies said his speech was referring to plans to remove Zuma and "send him home to rest" after the December conference, which were being discussed in the Dlamini-Zuma camp.

Together we can undo the harm Zuma has done to SA

Military veterans "should march in order to thank Zuma ...'You did a good job. What can we do for you?' So that we must look at the future. Jointly as the ANC and the people of South Africa," Mahumapelo said.

He said those who were calling for Zuma to be removed now needed to be patient.

"They don't want him to complete three- and-a-half months ... we say to those comrades, come back from those activities of yours. Join us in celebrating farewell. 'Farewell, Baba, farewell.'

"After lunch on December 18 there would be a new president and that president will be a woman and that woman will be Nkosazana Dlamini-Zuma," the North West premier told the crowd.

Other leaders known to be supporters of Dlamini-Zuma did not want to comment on the matter. ANC KwaZulu-Natal chairman Sihle Zikalala said he would not discuss the matter publicly.

"If there's a need for those discussions, we will entertain those issues internally," said Zikalala.

Dlamini-Zuma was on the campaign trail this week in North West and KwaZulu-Natal.

Speaking to her supporters at the Pietermaritzburg city hall on Friday, Dlamini-Zuma ruled out the possibility of agreeing to an arranged leadership outcome to avoid a bruising battle.

This comes as different provinces have met in the past week to lobby each other to find common ground ahead of the party's December elective conference.

Dlamini-Zuma said the tradition of the ANC stated that whoever won, received the support of the party members.

"The same tradition says those who did not succeed, there's no dustbin to throw them in. You will remember that when going to the conferences, it's about the numbers. Just let the branches choose," she said.

"The ANC has to win the elections in 2019 regardless of whoever wins [in December]. All I say is that the winner will be ANC. We cannot make the ANC fail, if the ANC fails it will be us," she said.

She said the losing candidate should not consider leaving the party: "If you want to lead, be prepared to be led also."

No romance, but Maine dumps Supra

The bromance between ANC Youth League president Collen Maine and North West premier Supra Mahumapelo is over.
News
3 years ago

Former deputy finance minister Mcebisi Jonas has rubbished ANC leaders who now claim not to have known about instances of state capture.
Politics
3 years ago