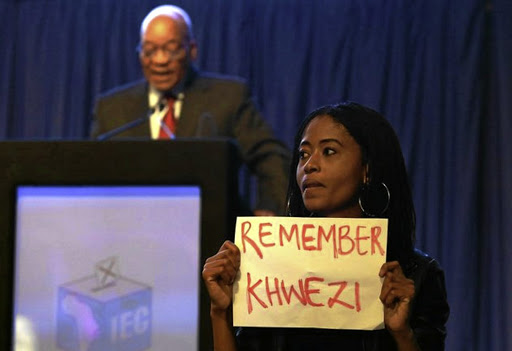 "He was always the perfect gentleman, never flirtatious or inappropriate," veteran journalist and author Redi Tlhabi writes of President Jacob Zuma in her revealing book, Khwezi: The remarkable story of Fezekile Ntsukela Kuzwayo.

"I was very comfortable with him and admired his commitment to our country and the continent," says Tlhabi, who had numerous interactions with Zuma during which he had always been "polite, courteous and a great conversationalist".

The gentleman's manners remained perfect - until one day he suggested she come for tea, and stay for dinner and breakfast.

"I have never been alone with him since," she writes.

Tlhabi's book explores the tragic life of the woman known as Khwezi until she passed away on October 8 last year. After her sudden death there was no longer any reason to hide her identity from those who had hounded her in life.

Fezekile Ntsukela Kuzwayo was the daughter of politically active parents and grew up in exile. She was the woman who, in 2005, dared accuse one of the most powerful men in the country of rape, a man who had spent 10 years on Robben Island with her father, struggle veteran Judson Kuzwayo. Zuma had been a trusted uncle, her malume, who had comforted her when her beloved father died when she was almost 10, and had many anecdotes to share with her.

During the rape trial, Fezekile's life was threatened by Zuma's baying lynch mob. Protestors shouted "Burn the bitch" outside court. Her home in KwaMashu was burnt to the ground. She fled the country the day after Zuma was acquitted. "The country, their home, had spat them out," writes Tlhabi.

A bubbly, intelligent, talkative young woman was forced to live like a refugee, continually on the run, ever watchful for an act of revenge.

In her book, Tlhabi relates another disturbing incident that adds to the evidence that Zuma is a compulsive sexual predator. It also involves a female journalist. This woman, a senior political correspondent, was invited to his Forest Town house, the home Fezekile had visited on that life-changing night. 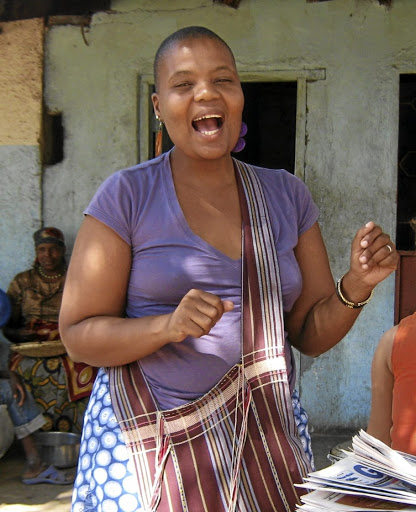 Fezekile Ntsukela Kuzwayo faced unbearable pressure to drop the case, some of it from big players within the movement she regarded as part of her family.
Image: Supplied

Victim of a honeytrap

The journalist had backed Zuma throughout his rape trial and had been allowed into the nucleus of the Zuma strategy. She had bought his story that he was innocent, the victim of a honeytrap to hobble his chances of becoming president of the country. Khwezi had accused him of rape; he claimed it was consensual and she had initiated it by wearing a kanga. She was 31. He was 63. He claimed he protected himself against her HIV status by having a shower after intercourse.

The journalist's ordeal had begun when Zuma invited her to discuss a "sensitive matter" with him and one of his aides. After chatting for a few minutes about nothing in particular, Zuma called the male aide aside for a private conversation and the man left.

Zuma then told the journalist he had something to show her. She followed him to a room and she suddenly realised it was his bedroom. He had his arms around her, and was pressing himself against her body. He "planted a long, determined kiss on her lips".

The journalist managed to pull away and made the first excuse she could think of: that she was having her period.

"Bizarrely, he reassured her, telling her not to worry, because they could try again next time," writes Tlhabi.

"He gave me an almost fatherly pat on my shoulder, telling me not to worry."

After being a staunch Zuma supporter, the emotional woman confessed to Tlhabi that at that moment she realised that Fezekile had told the truth all along.

"I knew it. I did not believe her before and thought Zuma was a victim. But that day, about three years after the trial, I knew she had been telling the truth."

But three years earlier, in 2005, Fezekile had been up against the former head of Mbokodo, the internal intelligence arm of the ANC. A master at dirty tricks and operating under cover.

Fezekile faced unbearable pressure to drop the case, some of it from big players within the movement she regarded as part of her family.

Two "aunties" who had known her as a child urged her to drop the case, claiming it would "rip the ANC apart". The Zuma camp tried several times to offer cash in exchange for her silence. ANC treasurer-general Zweli Mkhize - one of the contenders for the ANC presidency this December - linked her up with an attorney. She was led to believe "Malume Mkhize" had arranged the legal expert to ensure she was protected in the course of the trial. Initially the attorney seemed sympathetic and helpful, but when he realised Fezekile was determined to continue with the charges, against his advice, he remarked that Mkhize would be "surprised at the outcome of the meeting".

Fezekile describes several sinister episodes during the trial. In witness protection she was assigned a female bodyguard, known as Leila, who bizarrely attended all her sessions with her legal team and her psychologist. Police advised her to allow Leila to tape all these sessions and specifically advised her not to tell her legal team about the recordings. Sometimes Leila would disappear at night from the safe house, leaving Fezekile alone and unprotected.

One night Fezekile woke up to find all her bodyguards had vanished and all the doors to the house were wide open. It was only after she frantically phoned state prosecutor Charin de Beer that the guards returned, without explanation. 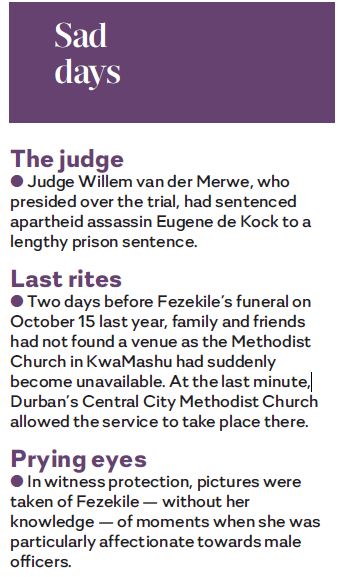 The trial, which began on March 6 2006, left her emotionally bruised and battered. Fezekile thought the ordeal she would face as the accuser would be about the present, but Zuma's counsel, Advocate Kemp J Kemp SC, resurrected the demons of her past.

When Fezekile was five and living in exile with her parents, she went to a neighbouring auntie's house to run a bath. "For many, exile was about communal living and sharing," writes Tlhabi. The auntie's brother, in his early 30s, ran a bath for her and ordered her to take off her clothes. He then took her to the bedroom and raped her.

"Liberators and oppressors had something in common: their propensity for violence and demand for women's bodies," writes Tlhabi. "To fight an evil system, surely one must have a sense of justice? Not when it comes to women and children's bodies."

Fezekile was raped two more times, once when she was 12 and then again at 13.

During cross-examination, Kemp poured scorn on her version of all three attacks as well as her sexual history, painting a portrait of her as a slut.

At one stage referring to her rape at the age of five, Kemp refers to her attacker as "having sex with you".

"That the court did not gasp at the thought of a man in his thirties 'having sex with a five-year-old' is staggering," writes Tlhabi. 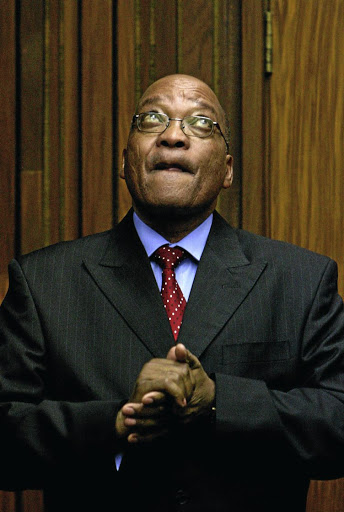 Jacob Zuma in the dock during his rape trial in the High Court in Johannesburg.
Image: REUTERS/JOHN HRUSA

"I remember now," says Fezekile. "I remember wishing it would all end. I remember just being in my bed. But I did not feel I had done anything wrong in being a sexually active adult."

It was only after five years in exile that Fezekile and her mother felt safe enough to touch down on South African soil again. Local government elections were taking place so friends dragged Fezekile off to cast her ballot, only to find she was not on the voters roll, as if her existence had been erased.

How did this make her feel?