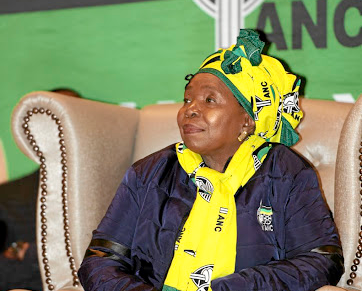 Of the top six leaders proposed by the Nkosazna Dlamini-Zuma slate, two — Ace Magashule and Jessie Duarte — have been linked to scandals involving the Gupta family.
Image: Elizabeth Sejake/Gallo Images

Several controversial figures, some with direct links to the Gupta family, have been included as candidates for the ANC’s national executive committee should Nkosazana Dlamini-Zuma’s slate win at the ANC conference next week.

The NEC is the ANC’s highest decision-making body between conferences.

A group of pro-President  Jacob Zuma MPs who are  opposed to  chief whip Jackson Mthembu are taking their fight against  to the ANC’s   national ...
News
4 years ago

Its members can influence how the mooted inquiry on state capture is conducted. Many of them will be subjects of investigation in such an inquiry.

The list of NEC candidates, seen by the Sunday Times, features Public Enterprises Minister Lynne Brown at No15 on the Dlamini-Zuma slate.

Brown has come under fire after it was revealed that at least three people close to her have links to the Gupta family, an accusation she has denied.

The Guptas reportedly acted as a guarantor for Maine’s Pretoria home.

Zwane and Van Rooyen are known to be close to the Guptas and it is claimed that the brothers had a hand in their appointments to the cabinet.

Maphatsoe is known to be a defender of the Guptas and has been accused of having the Guptas as his benefactors.

The Dlamini-Zuma list also includes confessed fraudster Carl Niehaus. Niehaus, who has appeared regularly on ANN7 and in the New Age newspaper, is said to be Dlamini-Zuma’s campaign manager.

Of the top six leaders proposed by the Dlamini-Zuma slate, two — Ace Magashule and Jessie Duarte — have been linked to scandals involving the Gupta family.

An irate President Jacob Zuma is said to have  scolded  ANC leaders in KwaZulu-Natal after the province failed to deliver  overwhelming support for ...
News
4 years ago

The Gupta e-mails revealed that the sons of Magashule and Duarte are business associates of the Gupta family.

In stark contrast, the consolidated list of NEC candidates on Cyril Ramaphosa’s slate includes ANC leaders who have been vocal in the fight against state capture.

They include former deputy finance minister Mcebisi Jonas, who blew the whistle on how the Guptas offered him the finance minister’s job and cash in return for deals being directed their way. He was fired from his job along with Pravin Gordhan, who was finance minister at the time.

Also set to make a possible political comeback through Ramaphosa’s slate is former finance minister Nhlanhla Nene, whose removal in 2015 was allegedly influenced by the Guptas.

Politicians who have been vocal in their stand against state capture are Health Minister Aaron Motsoaledi, Joe Phaahla and Jackson Mthembu.

Outgoing ANC secretary-general Gwede Mantashe, who is contesting the position of national chairman, is also considered high on the Dlamini-Zuma list for the NEC.

When comparing the two slates, Zweli Mkhize, Thoko Didiza and Nosiviwe Mapisa-Nqakula feature as NEC candidates on both sides.

Former youth league deputy president Ronald Lamola proved popular on both slates as he received a high number of nominations from all provinces.

Other former youth leaders who are newcomers to the NEC on the Dlamini-Zuma ticket include Andile Lungisa, Songezo Mjongile and Buti Manamela.

Little charisma, no great speeches - but the race for the top job has attracted unprecedented interest
Opinion & Analysis
4 years ago

An irate President Jacob Zuma is said to have  scolded  ANC leaders in KwaZulu-Natal after the province failed to deliver  overwhelming support for ...
News
4 years ago