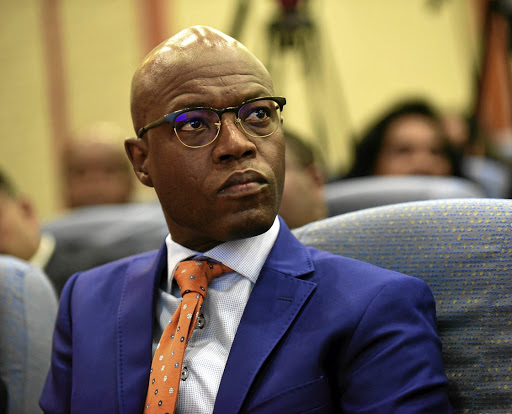 Matshela Koko was cleared of charges after failing to declare a conflict of interest in deals totalling more than R1-billion that were awarded to a company in which his stepdaughter owned a stake.
Image: Freddy Mavunda/Financial Mail

Eskom was justified in paying more than R500-million to Trillian Capital Partners despite having no valid contract with the Gupta-linked company, according to legal opinion obtained by the power utility.

A report by McCaps Motimele SC - which was also used to exonerate suspended acting group executive for group capital Prish Govender this week - said Eskom's "tacit obligation" towards Trillian was sufficient justification for the payment.

This opinion flies in the face of legislation governing public procurement, including the Public Finance Management Act, which stipulates that no payment may be made without a written agreement.

The state-capture project appears to be alive and well and living at Eskom.
Opinion & Analysis
4 years ago

It also bucked the utility's internal policies, said an Eskom insider this week.

"This senior counsel is willing to say - forgetting about the PFMA, the PPPF [Preferential Procurement Policy Framework] and the Companies Act - that it's OK to do business on a tacit arrangement. It's ridiculous," the source said.

The report also contradicts findings of three other reviews done for Eskom.

Eskom spokesman Khulu Phasiwe said the decision to reinstate Govender was based on the report's finding that he had done nothing wrong. "The board, after considering the report, has decided to lift Mr Govender's suspension ... But if there are any aggrieved parties or individuals [who] have other information that the board may not have had at the time, they can bring it forward."

News of Govender's reprieve came at the same time as the return of former acting CEO Matshela Koko, who was cleared of charges of failing to declare a conflict of interest in deals totalling more than R1-billion that were awarded to a company in which his stepdaughter owned a stake.

Govender and two other employees had been suspended for their roles in Eskom paying advisory firm Trillian R500-million in fees without a contract or evidence of work.

Motimele was mandated by Eskom to review the findings of three interim reports, by law firm Bowman Gilfillan, G9 Consulting and Advisory, and Eskom's own assurance and forensic unit, which all delivered damning findings on the three Eskom officials.

He was also tasked to give an opinion on the letter of demand Eskom issued to McKinsey and Trillian for the return of R1.5-billion paid to them unlawfully.

Although no direct mention is made of Govender's suspension in his findings, Motimele said: "We are unable to arrive at the same conclusion as Bowman on the suspension of certain individuals."

Govender, who was project leader on the McKinsey contract, was suspended along with Edwin Mabelane and Charles Kalima after a forensic review by Bowman Gilfillan recommended this step pending further investigation. Phasiwe said the Eskom board would soon make an announcement regarding Kalima and Mabelane.

Eskom has agreed to allow Gupta-owned mining company Tegeta Resources and Exploration to deliver lower quality coal‚ at a more expensive rate‚ to its ...
News
4 years ago

In his report Motimele raised serious warnings about poor governance and failure to adhere to internal processes at Eskom. But he made no determination as to which employees were responsible or accountable.

Motimele argued that the fact that McKinsey authorised Eskom to pay Trillian - albeit without a contract - as well as that McKinsey and Trillian made presentations on work packages to the parastatal, justified all payments save for R460-million.

This was despite David Fine, global leader of McKinsey's public and social sector practice, having offered, during an appearance before parliament's portfolio committee on public enterprises, to pay back the money.

McKinsey later clarified it would only do so if a court of law found the agreement to have been unlawful.

Motimele said that although Eskom could only legally expect R460-million back, "we are of the view that legal services should write to McKinsey on the offer made in parliament to pay back the money received in terms of the settlement (R1.03-billion) agreement", he said.

Eskom's attempts to recover the R1.5-billion paid to both McKinsey and Trillian remain in force, Phasiwe said.

Former acting CEO of Eskom Matshela Koko will be back at work on Monday January 8 in the role of head of generation‚ according to Eskom spokesman ...
News
4 years ago

Queries raised on memo that got Koko off hook

Concerns have been raised over a key piece of evidence that acting Eskom CEO Matshela Koko relied heavily on in his disciplinary hearing.
News
4 years ago