Middlemen hit jackpot: Lottopreneurs cash in on a change in the law

A smallholding in Makhado, Limpopo, that belongs to Humbulani Tshifhango, whose school has acted as a conduit for lottery beneficiaries.
Image: Masi Losi

Tens of millions of rands of lottery funds intended for good causes are moving through the hands of “Lottopreneurs” who have cashed in on a change in the law.

The 2015 amendment allows nonprofit organisations to act as “conduits” to new or small organisations unable to meet stringent criteria for grants. The change also allows the National Lotteries Commission to be more proactive and channel funding to institutions when it believes there is an urgent need, such as drought or disaster relief.

Annual reports from the commission only name the conduits, making it impossible to ascertain how many organisations have been funded this way — or to trace the grants they received.

Former Lotto and Road 2 Riches TV presenter Paul Freathy and his wife Gail have been victorious over the UK Home Office and will no longer be ...
News
4 years ago

In one case discovered during an investigation by the Sunday Times, a rural private school in Limpopo has received almost R59-million while acting as a conduit.

The Konani Pfunzo Comprehensive Learning Centre is registered both as a limited company with the Companies and Intellectual Property Commission and as an NPO with the Department of Social Development.

One of the projects funded via the school involved sinking 200 boreholes in five provinces. Around R5.4-million of the R59-million is unaccounted for. While the Lottery’s 2016 annual report lists a grant of R55.43-million to Konani Pfunzo, several official Lottery documents, and an NLC press release, value the drought relief programme at R50-million.

The owner of the school is also the deputy chairman of another NPO, Vhembe Health and Fitness Centre, which has received just over R12.3-million in lottery money. Of this, R4.35-million was mostly used to fund a heritage festival. Like the school, Vhembe is registered as both a private entity and an NPO.

In a third example, the Buyel’Ekhaya Pan African Festival — an annual event in the Eastern Cape — was awarded R6-million late last year. It is unclear how the grant was channelled, as Buyel’Ekhaya was not eligible for funds in 2016.

Mzukisi Makatse, provincial monitoring and evaluation officer at the commission, has been suspended for “insubordination” after he refused to approve the grant because, he said, it did not meet requirements.

The sole director of Konani Pfunzo Learning Centre (Pty) Ltd, which was registered in 2010, is Limpopo businessman and farmer Humbulani Tshifhango. He is also chairman of the NPO with the same name.

Tshifhango failed to respond to e-mailed questions. “I think you should contact the National Lotteries Commission, they would be better placed to give you more information,” he said in a brief phone conversation.

The commission declined to say why Tshifhango’s school, with 176 pupils and 13 teachers, was chosen as a conduit.

The commission said R55.4-million paid to Konani was for boreholes. “There was a conduit relationship between the ... organisation [Konani] and Tshikovha Graduates Academy, but the direct beneficiaries are communities for which these boreholes were ultimately created,” it said.

SA's secret millionaire reveals how he grew his lotto winnings

It's been two years and five months since 30-year-old Paul Williams won the national lottery and‚ to date‚ not even his boyfriend of two years is ...
News
4 years ago

Tshikovha Graduates Academy was registered as a nonprofit two years ago, two months before the first boreholes were sunk and shortly before the Konani grant.

The academy is linked to Tshikovha Environmental and Communication Consultancy, registered as a closed corporation in 2005. TEC’s sole director, Moudy Ngwedzeni Mudzielwana, is one of the academy’s directors. The “academy” has no students, but instead — as with the sinking of the boreholes — manages projects in which graduates are included to give them work experience, Mudzielwana said in a written response to questions.

He said he had not done business with Tshifhango before and no relationship existed between them “except that we worked together on this project”. But he did not respond to a question on how the school was chosen as a conduit for the borehole grant.
He said his company had not “physically” dug the boreholes.

The owner of Vhembe Health and Fitness Centre, Junior Makhado, who chairs an NPO of the same name, said R5.5-million lottery money was used to teach rural people “how to live healthy lives”.

Asked why his NPO had been chosen to channel funds to a heritage festival, he said: “I was phoned and asked whether I would mind.” For this, the NPO had been paid R105,000 by the commission, he said.

Paying school fees and securing a new house for his family are the first things a Dutywa father of four wants his spending his winnings on‚ after ...
News
4 years ago

The intention of the 2015 amendment to the law was to assist small nonprofit organisationsto overcome the onerous conditions for grant applications by allowing them to apply through “a conduit”, according to the National Lotteries Commission.

It also meant NPOs in existence for less than six months could apply via another organisation if “there is a clear need for a project in a community and that community is
not organised through a recognised legal entity”, said commission legal head Tsietsi Maselwa.

“The use of conduits is provided for ... exactly to assist those that do not have capacity
to access funding,” he said.

“The NLC funds NPOs as long as basic requirements are met. The 2015 regulations have in fact relaxed the strict requirement in the 2010 regulations by allowing small or emerging NPOs to get funding. Technically, an NPO registered a day ago can in fact approach the NLC for funding.”

The commission did not explain why Konani Pfunzo Comprehensive Learning Centre was chosen as the conduit for tens of millions of rand for a nationwide project.

Instead, Maselwa said an amendment to the Lotteries Act allowed the commission, “upon the request by the minister, [lottery] board or on its own initiative in consultation with the board to conduct research on worthy good causes that may be funded without lodging an application”.

I expressed concerns about how grants were being awarded, and who was getting them... I never got a response and the amendments to the act went ahead

The borehole project was a decision of the NLC board, he said, and was not put out to tender because funding was not based on a tender process or supply chain management
protocols that applied in government. “It is based on adjudication,” he said.

Financial reports supplied to the Department of Social Development by Konani Pfunzo do not record any lottery funding or any amounts similar to what the lottery paid out.

Dean Macpherson, the DA trade and industry spokesman, said he was not surprised by what the Sunday Times had uncovered.

“I wrote to both the minister and the deputy minister in 2015 about my concerns about the proposed amendments to the Lotteries Act and warned that it would create avenues to be exploited for corruption,” said Macpherson, who serves on the trade and industry
portfolio committee.

“I also expressed concerns about how grants were being awarded, and who was getting them... I never got a response and the amendments to the act went ahead.”

His office was “flooded with people with good causes... who apply for funding but never hear back”.

Attempts to contact the chairman of the trade and industry portfolio committee were unsuccessful. 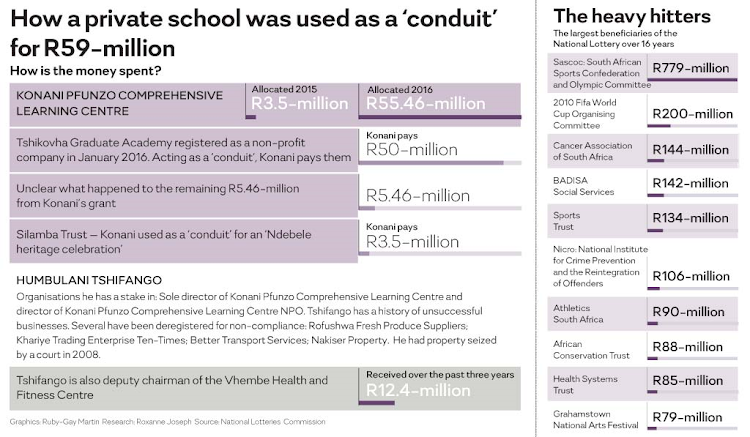 The National Lotteries Commission has been funding various beneficiaries since 2002. Each year, it sets aside funds in line with sector allocations prescribed by the Lotteries Act. By 2017 it had allocated R24-billion.

Of that, about R10.7-billion was allocated to “charities ”, including a variety of nonprofit organisations and schools.

Other big beneficiaries in this sector include the South African National Council for Child and Family Welfare, SOS Children’s Villages, the Cancer Association of South Africa and the National Institute for Crime Prevention and the Reintegration of Offenders.

The biggest single recipient is the South African Sports Confederation and Olympic Committee, which has received over R779-million. The 2010 Fifa World Cup organising
committee received more than R200-million.

In the category “miscellaneous ”, about R686-million has been distributed.

A bitter row broke out in May 2017, when the National Lotteries Commission said it would cut funding to the South African Sports Confederation and Olympic Committee because it had become “dependent” on the lottery.

Tubby Reddy, who was Sascoc’s CEO at the time but has since been fired, complained that some of the changes announced by the commission had “downgraded” Sascoc to an umbrella body. One change introduced a 12-month “cooling off” period between grants, while the other put a cap of R5-million on lottery funding.

The commission said in a statement that further funding to the Olympic body would not be considered until it had reported “satisfactorily” on a R70-million grant it received in 2016. The commission also said it had imposed a “cooling-off period” on Sascoc funding, ending in June 2017.

Yet only a few months later, Sascoc received a further R94.98-million in lottery funding, making it the year’s biggest recipient in the “sports and recreation” category. Its affiliate, Athletics South Africa, was the second biggest, banking R35.7-million.

Questions to the commission about whether Sascoc had submitted the outstanding report and dealt with other issues raised in the statement went unanswered.

Sascoc has received more in lottery handouts than any other organisation over the past 16 years. Between 2006 and 2017, it received just more than R779-million. If its affiliates are included, the total jumps to R2-billion.

In 2016, the year of the Rio Olympics, Sascoc received eight payments totalling R189-million. Its affiliates received hundreds of millions more, with R204-million going to athletics, R97-million to swimming and R55-million to table tennis.

According to the commission’s annual reports, the amount given to Sascoc between 2002 and 2016 was R35-million more than the amount shared by all schools in the country.

INFORMATION AT YOUR FINGERTIPS

Tracking National Lotteries Commission grants is difficult and time-consuming, despite its claim that it is a transparent organisation.

Commission annual reports detailing its grants are opaque and riddled with inconsistencies, and conflicting and missing information.

Many of these organisations have provincial affiliates, adding more name variations to cross-reference when trying to track grants.

National Lotteries Commission annual reports detailing its grants are opaque and riddled with inconsistencies, and conflicting and missing information

Another problem in tracking grants is that while organisations used as “conduits” to funnel grants to smaller nonprofit organisations are recorded, the ultimate beneficiaries are not.

Another inconsistency is between the reporting of grants in some categories and the total amounts allocated to each category of grants (charities; arts, culture and national heritage; sport and recreation; and miscellaneous).

We found 20 inconsistencies compared to reported totals and line items in the commission’s annual reports.

Until recently, tracking grants involved long hours of wading through PDF documents. Now, a data-driven tool built by civic technology NPO OpenUp as part of a worldwide investigation into lotteries has made it possible to track every grant since 2002.

The tool provides an interface showing which organisations have been funded, how much they have received and when they were allocated grants.

Importantly, the tool is able to collate all the different iterations of names of organisations used by the commission when recording grants.

• The Sunday Times invites you to use the tool below to check out NPOs in your areas and let us know if you find anything worth further investigation.
E-mail tellus@sundaytimes.co.za

- This investigation is part of the South African component of Gaming the Lottery, a transnational investigation into the worldwide lottery industry, which included the development of a tool by civic data NPO OpenUp that has made 16 years of National Lotteries Commission grants easily searchable. Key partners include Columbia Journalism School, Open Up and PennLive, and Organised Crime and Corruption Reporting Project, which provided research support. The Fund for Investigative Journalism and Trust Africa supported this project.