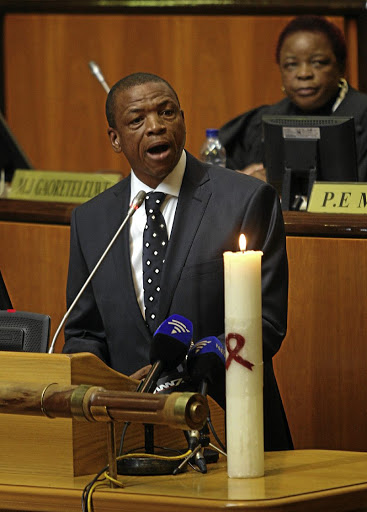 The revolt against North West premier Supra Mahumapelo is mostly led by members of the provincial legislature who were axed by the premier from his executive.
Image: Veli Nhlapo/Sowetan

North West premier Supra Mahumapelo may be removed from his position on Tuesday - that is, if his detractors within his own party have their way.

Senior ANC leaders in the province told the Sunday Times they would take advantage of an EFF-sponsored vote of no confidence in Mahumapelo and vote with the opposition, despite a directive from the ANC's national executive committee not to side with an opposition party.

The revolt against Mahumapelo is mostly led by members of the provincial legislature who were axed by the premier from his executive.

One of them is SACP provincial secretary and MPL Madoda Sambatha, who said he believed the ANC had no choice but to recall its premier.

"One of my dissatisfactions is the fact that corruption is not dealt with as corruption. It is dealt with selectively to how the premier related to the people involved," he said.

Sambatha said he raised several concerns before and will continue to raise them.

Sambatha, who was fired by Mahumapelo last year, said he would call for the premier's head in the caucus meeting on Monday but would not say if he would side with the opposition in the no-confidence vote. But another senior ANC MPL who used to serve in Mahumapelo's executive said he was willing to vote in favour of the motion.

"We don't need a secret ballot for this, even if it's by show of hands we will go for it. We might want to amend it a little bit," said the MPL.

He said the rebels had the support of eight members in the caucus who were willing to vote for the motion.

"I am just giving you the figure of the diehards only, not other possible people who could come ... [we have people] even on the side of the executive," said the MPL.

The ANC has dispatched its NEC deployee, Deputy Minister of Co-operative Governance Obed Bapela, to the province.

The Sunday Times understands that Bapela has held meetings with the ANC caucus in the province. In a special caucus meeting scheduled for tomorrow, Bapela is expected to try to persuade ANC MPLs not to vote with the opposition.

Bapela would not comment when contacted on Friday, while Mahumapelo had not answered questions at the time of going to press.

An ANC leader familiar with the talks in the North West described the situation as "risky", saying MPLs and ANC leaders were disillusioned.

"Attempts to unearth and deal with corruption have been frustrated by the current leadership. Now people are angry. But we have to explain to them that the unrevolutionary method of removing the premier through this motion will hurt the ANC more than help it," the leader said.

He said it had become clear that the ANC could no longer ignore the accusations raised by its members and provincial leaders about Mahumapelo.

"There seems to be an agreement that the matters will not be swept under the carpet. And we will go from now until the beginning of June to come up with a solution."

Another MPL said they wanted to get rid of the premier because of allegations of corruption in the province. The MPL said things were so bad that even some heads of departments were refusing to be held accountable by the provincial legislature because they enjoyed Mahumapelo's protection.

"We can't allow this thing to continue to happen, HODs are doing as they please, some speak as they want to members," the MPL said.

It is understood that the rebellion has extended to the premier's own executive, led by MEC for social development Hoffman Galeng.

Galeng described talk that he was leading the rebellion as untrue. He said while he knew of some concerns about the premier, he did not think any ANC MPL would vote with the opposition.

Another national leader who is familiar with the intervention talks said a confession by ANC Youth League Leader Collen Maine that Mahumapelo had introduced him to the Guptas would add fuel to an already raging fire.

"The grass is burning. Very soon the trees are going to catch fire ... I just hope it's not the winter grass that will catch fire quickly," he said of the situation there.

Mampara of the week: Collen Maine

Confession comes too late Two years ago this Mampara was the Chief Defender of the Gupta family and their corrupt network. When asked about his ...
Opinion & Analysis
3 years ago

ANC Youth League president Collen Maine has been reprimanded by the league's top brass over his confession that he was introduced to the Gupta family ...
News
3 years ago