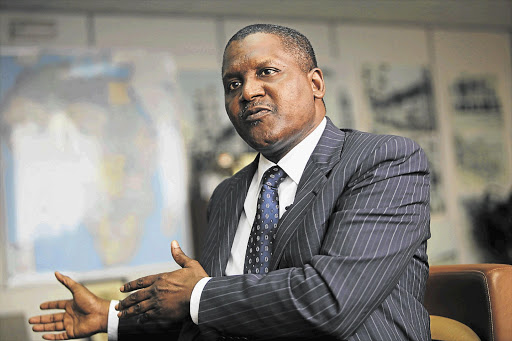 Billionaire Aliko Dangote has revived his interest in Zimbabwe since the transfer of power to President Emmerson Mnangagwa.
Image: Reuters

A cabinet minister asked Africa's richest man, Aliko Dangote, for a $5-million bribe on behalf of the Mugabe family, sources told the Sunday Times this week.

Robert Mugabe's nephew Patrick Zhuwao is said to have allegedly requested the bribe weeks after Dangote visited Zimbabwe in October 2015, the sources said. Zhuwao was the youth development and indigenisation minister at the time.

The sources claimed Grace Mugabe had been behind the bribe request. It was allegedly contained in an e-mail from Zhuwao and informed Dangote that "as with all investors which come into Zimbabwe there was a need for him to secure his investments and grease elbows, and therefore a sum of $5-million is requested".

Contacted for comment, Zhuwao said he would provide a response only once he knew the identity of his accusers.

"I don't know Dangote. I have never met him, and when he came to Zimbabwe I wasn't even in the country," he said. "It's all so laughable, and it's easy for people to create e-mails and make claims."

During his 2015 visit, Dangote, a Nigerian businessman who has an estimated net worth of $14.1-billion, unveiled plans to invest almost $1-billion in the cement, coal and power sectors in Zimbabwe.

A $400-million cement plant would have been the platform for the company to challenge the dominance of PPC and Lafarge.

Earlier this month, speaking at an event in Singapore alongside Zimbabwe-born telecommunications tycoon Strive Masiyiwa, Dangote said that a minister from an African country had told him to bring a briefcase full of money when he returned.

He did not name the country but said the attempt to solicit a bribe to "ensure the protection of his investments" was why he shelved his plans.

I don't know [Aliko] Dangote. I have never met him

Mahachi went to Mazoe, the heart of Grace's business empire in Mashonaland Central, and sources said Grace made strenuous attempts to obtain Dangote's direct contact number from her.

"When Dangote was here, he gave out business cards to government officials, but his business card does not have his direct contact number, just his e-mail. Grace tried to get his direct number," one source said.

It is alleged that when Dangote rebuffed the request for a bribe, Zhuwao criticised the businessman's proposed investments, saying these flouted the country's 51% indigenisation requirements.

Zhuwao defended his stance by saying that negotiating from a position of desperation would not have resulted in profitable deals for the country.

Mahachi said this week she could not comment on Dangote's personal communications. "He has his communication department, which you can call," she said.

The billionaire has revived his interest in Zimbabwe since the transfer of power to President Emmerson Mnangagwa, and a team from the Dangote Group left the country this week after a 10-day tour.

They are understood to have visited Hwange to scout for coal deposits. Dangote is keen to invest in coal mining before constructing a cement factory.

"This is the second visit by this technical group showing interest in investing in Zimbabwe. The new dispensation and its 'Zimbabwe is open for business' policy has given hope for accelerating investments," said the statement.

"The visits were most insightful and the team were pleased by what they saw and were most appreciative of the support and discussion with the mines minister."

Dangote is no stranger to bribery claims in countries where he has business interests.

In 2014, he sued Fackson Shamenda, Zambia's labour minister at the time, for claiming that one of Dangote's executives had tried to bribe him.

Denying the claim, the company described the allegation as "malicious misinformation".

In court papers, Dangote said the minister had created an impression the company was exploiting Zambian workers and had tried to entice government officials with bribes.

"The plaintiff has been brought into public scandal and its reputation has been injured," he said.

Civil rights watchdog AfriForum said on Thursday that the North Gauteng High Court will next month hear a case against the granting of diplomatic ...
News
4 years ago

Unhappy birthday: No Mugabe‚ but not all Zimbabweans are celebrating Independence Day

For the first time in nearly four decades‚ Zimbabwe will celebrate its birthday without Robert Mugabe on Wednesday.
News
4 years ago